How I Broke My Nose & How To Fix A Broken Nose!

This isn't me, but look how happy he is with his broken nose!

For those that are interested in how it feels to break your nose, I will tell you here what happened when I broke my nose, exactly how it felt and how I got it fixed.

I was at my martial arts club practicing throws and locks. I was very hungover as for some reason that I can't remember now I had been out the night before. The problem with being hungover is that your reactions are dulled, you're tired and you're generally not really with it, as I'm sure many of you reading will know. Anyway, while training with one of the lads from the class, I put him in an armlock and put him to the ground. As he hit the ground, he rolled forward to roll out of the lock...

If I had been a bit more aware, then I would have either stopped him rolling, or had been in a position where he wouldn't have caught me. Unfortunately, I was very dull witted that night, as he rolled forwards, my head was in the wrong position, his heel swung over as he forward rolled and CRACK, straight into the left hand side of my nose. I heard it and felt it break, it was loud and I knew it had been hit with a lot of force. I reached up both hands to my nose to find it was on the right hand side of my face and quickly crunched it back into position so it was facing forwards again. I didn't really have much time to think before I did this, I just did it automatically. Then the blood started. I've never bled so profusely, it was honestly running like a tap. This worried me more than the break itself, as there was so much blood pouring out my mind did that thing that I'm sure anyone that has ever bled badly does and I started to think 'I'm going to bleed to death!'.

Dramatic I know, but when it's pouring out of you, you sort of feel like your life force is draining away. I've been knocked out, broken bones, faced up against much bigger and stronger opponents, all sorts of things over the years while training, but it's a lot scarier than all of those things when you're losing blood very quickly in my opinion.

Anyway I went into the bathroom and stood over the sink to let it pour down the sink. It didn't seem to be slowing. My mate came in and told me to squeeze the bridge of my nose hard. Did that and after a few minutes it stopped. Well almost, still dripping, but not pouring. It's a big relief when your lifeblood has stopped pouring out!

After this I stayed til the end of training, then when we packed up I drove to the hospital as my nose was still crooked way over to one side so was clearly broken. When I got to the hospital they told me they couldn't treat me for a week til the swelling had gone down, so I told them I'd see them in a week.

When you are walking around with a broken nose, then it's an odd feeling. You feel like someone's going to whack you on it accidentally and you really don't want that to happen. Of course no one ever touches you on the nose when you don't have a broken nose, so it wouldn't happen after you've got a nice break and a couple of black eyes, but your mind is a funny thing. When I was in the shops after it had swelled, I almost felt like putting my hands out in front of me to stop old women from accidentally bashing me straight in the nose with their walking sticks or something.

Luckily I got through the week without anyone hitting me on the nozzle and a week later I was back in the hospital. They have a department where the doctors deal with idiots like me who have broken noses and these guys know how to fix a broken nose gently and quickly as they do it for a living..

Hmm, what shall I use to break it again?

At the hospital the doctor had a look and told me he was going to have to break my nose again with his hands and then reset it. He told me that it wouldn't hurt that much as it probably hadn't reset itself very well after a week. I'm not really sure if this really counts as another break to be honest, but for the purposes of the story I'll say it does. Yeah.

In the chair I went and he produced a large needle to inject my very swollen and tender, broken nose. For some reason he told me that the needle was flexible so when it went in it would scrape against the bone. I have no idea why he told me that as it isn't the sort of thing you need to hear before they inject you as your mind just follows the sensation of the needle to see if you can feel it scraping along. Anyway the needle went in. This part wasn't that bad really as I am not too bothered by injections.

The next stage was to grab my nose with the heels of his hands and with a firm push and another crunch, move it sideways so it lined up with where it was supposed to be. The two nurses had a look and cooed away at the return of my good looks and I went away feeling relieved that I had a straight nose again.

Back to my normal looks again

Whoops I broke it again

A week later and the nose was setting into position. We had to do a martial arts demonstration at a hall, where the locals come and watch various martial arts clubs do their thing. All of the other clubs had choreographed a routine, but that's not how we train, our stuff is more reaction based and rehearsals as far as I'm concerned are not what martial arts are all about. So we had no set routine, other than one person in the middle, everyone else jump him and he defends himself. Repeat with various weapons involved. We were just warming up and attacking the instructor of my class, who was the man in the middle. I went in for some sort of attack that I can't remember now, he then caught me across the face with a forearm strike. If you haven't seen a strike like this in action before, it's an awesome strike that I'm surprised isn't seen more in MMA as it can stun or KO people easily. It's a close range strike, you basically perfom it almost like a punch, but instead of the fist hitting the face, you hit past the head so as your arm straightens out, the inside part of the forearm hits the opponents neck or jaw. It is not easy to see it coming so not easy to dodge and you can put a lot of force behind it.

Enough about the effectiveness of the strike, the important part of this not particularly interesting story is that it hit me a good whack straight across the nose, which as you've guessed broke it again. Imagine the look of someone immediately after sucking a lemon, but with blood coming out of his nostrils. That was me. It was obviously still painful as the thing was still very tender from the previous two incidents. More blood started coming out, this time however when I put my hands up to straighten it out, it moved across and into position quite easily as it was so loose from the previous breaks so it was a fairly easy fix.

After this we still did the demo, but I attacked using kicks only so I didn't get whacked across the nose again as I really didn't fancy it. I've recently found out that you can actually get nose guards to stop this sort of thing from happening. They look completely ridiculous though and I imagine if you wear one it encourages 'jokers' to flick or whack you on the broken nose for a laugh.

This sort of nose guard doesnt look great but it allows you to remain active even while nursing a broken nose! 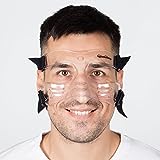 This all happened a couple of years ago, it's all healed up now, although there is a bit of a lump on one side, but no big deal. So the answer to the initial question that you clicked this post to read is, it's loud and it hurts!

If you ever do break your nose, then try to straighten it out immediately as the doctors won't fix it for a week. You don't want to be walking around with your nose on your cheek for that long. I would suggest not getting kicked, punched or kneed very hard in the nose as a lifestyle choice. I'm not planning on getting it broken again and hopefully you can go the rest of your life without it happening to you either. A broken nose is not much fun, although it is of course possible and not really all that painful to fix a broken nose. If you break your nose, then don't wimp out and let it set wherever it lands, get to the doctor and let them fix it!

The alternative of course is to let it heal, then get a rhinoplasty (nose job) to sort it out. However as this involves hammers and other unpleasant sounding stuff if the nose has fully healed up, then I would suggest doing it while your nose is still a bit loose and floppy from the break. If you've just got a great big nose though that you want sorting out, then a rhinoplasty is your only hope, no amount of punches or kicks is going to sort that big boy out!

Thanks for reading and if you have any comments, please leave them below.