How People View Death and the Concept of Mortality

Very few things in life are guaranteed. However, there is one aspect of life that is a complete guarantee and that is death. Every living thing eventually comes to an end in the form of death. Death can be seen from many different angles. Some may see it as a terrifying thing, while others welcome it for one reason or another. The topics of this hub are going to look at death in different ways.

A person deals with death in different ways which tend to coordinate with their personality types. A person who lives carefree and embraces life may not worry about death and understand when their time on earth is up they lived a full and happy life. Christopher Landon watched his father, Michael Landon, pass away. Before his father died he lived a life of fear, including a great fear of flying and even not sure as to how he felt about death. It wasn’t until his father’s death, he explains, that things changed. “Then he died and I faced death. I realized you never know when you’re going to die, and that you should face every challenge with that understanding.” Landon’s understanding of death helped him realize that it is best to embrace life and live knowing you are never going to know the exact moment your time is up. He lives a life enjoying himself and not worrying about an issue that he has no control over and no idea when it will actually happen.

Other people fear death. The fear can be so bad that it makes the person pull back from life, which as Troy explains, happened to him; ”Physically Troy was doing well, but mentally he was paralyzed by fear. ‘It had never been more paralyzing,’ he explained, ‘just bad enough to make me keep a distance from life.’” The fear he was dealing with was his own mortality. Troy was diagnosed with AIDS and knew eventually he would die from the disease. Instead of taking that understand and dealing with it like Christopher, Troy lived only a half life, that is until another terminally ill woman named Jackie, who also had AIDS came into his life.

Jackie needed a care giver, one to help her in her final days and weeks. She had no family, as they had abandoned her when her illness was diagnosed. At first, Troy wasn’t sure if he had the strength to face his fear, but it wasn’t until he actually saw the fear on her face that he knew he wouldn’t be able to ignore her, as he explains, “She had the biggest brown eyes I had ever seen. I looked into them and saw all this fear there. It was written on her forehead: ‘I am afraid I am dying, I am afraid I will be alone, I am afraid no one will be there for me, I am afraid you will leave me!’” Fear of death is quite common, especially when one is staring right at it. Eventually, like Christopher, Troy got over his fear as he watched his dear friend Jackie finally die. He knew that death would not be as scary as he thought when he saw how peaceful Jackie went.

The final way a person can deal with death is the welcoming, or surrendering to death when it is near. One young boy, dying of cancer, had a hard time at first dealing with the end of his young life. He drew pictures of himself getting hit by cannon balls to show his unhappiness with his pending death. After working with counselors the young boy was able to accept and surrender to death and know that when he finally did pass away that it was more of a relief for his family and friends so that he was no longer suffering. One of the counselors working with the unidentified boy explains the turn around the young boy made.

“After we worked together for a while, he accepted and surrendered to what was happening in his body. I knew our work was done when he drew a picture of himself flying on the wings of a bird in heaven. New he felt a loving force would carry him off; he wouldn’t resist it. This surrender made the rest of his life, however brief, more enjoyable and meaningful.”

Thankfully this boy was able to get through the process of grief and die while living with acceptance instead of the other steps in the grieving process.

There are generally five identified steps in the grieving process. Both people experiencing a loss and others who themselves are the ones dying tend to go through five stages and they generally follow this order: denial, anger, bargaining, depression and acceptance.

Denial is when an individual expresses the thought that the current events are not happening, meaning they do not want to believe they or a loved one is dying.

Anger is when a person realizes that either themselves or a loved one is dying and begin to feel a mad feeling that this is happening to them.

Bargaining is when a person is willing to make an exchange for life. A child might try to bargain with their God that if they are nicer to their sibling that their mommy will no longer be sick. In any case of bargaining the person is willing to become a better person if only they or a loved one can get better and live a longer life.

Depression is second to last because this is the moment that they realize death is imminent and there is nothing that can be done.

Acceptance is when a person realizes that there is nothing that can be done and it’s not necessarily a bad thing. The person usually realizes that they or their loved one have lived a good, full life and are able to celebrate that instead of dwelling on the negative. If a person is given enough time after they are told they have a terminal disease then generally the person is able to complete all the stages and dies in the acceptance phase.

However, if they are not given enough time to go through all the stages then they die extremely unhappy. Likewise, if it is a loved one that is dying those surviving will, if given enough time will hopefully be at acceptance when their loved one finally does pass. If there is not enough time then they must complete the stages after said person dies. If it is a sudden death that occurs then the family and friends is left to complete the grieving process after the fact.

Looking at the way functionalists, conflict theorists and social interactionists define and believe about aging it is possible to draw connections between aging and how they think about death. Functionalists have the disengaging theory, which basically states that as people age they should be withdrawing themselves from society and thereby preparing for their death. One can take this view and apply to death. The disengagement theory believes that the dying need to withdraw themselves or disengage themselves from society so that they can be in the acceptance stage of their death. This too could also make it easier on those surviving because their positions in life and responsibilities have already been handed over and covered by someone else. Old age homes are good examples of this theory in practice.

Finally social interactionists have developed the activity theory which states that a person, especially elderly, need to embrace life at an old age and go out and enjoy various activities. A social interactionist would want those who are dying to embrace life and live out their last days to the fullest, enjoying as much of life as they can. This would ensure that the dying person dies happily and the loved ones can know that they died happy instead of unhappy. It is interesting to look at how sociologists view death in accordance with their beliefs. 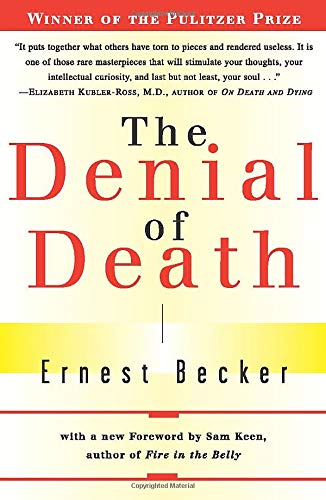 The Denial of Death
Buy Now