Breastfeeding Twins - How to Breastfeed Two Babies or More

Who in their right mind wants to even consider breastfeeding twins? It’s total madness. I know because I did it.

There was quite a gap in ages between my first three children and the twins. My youngest was then 9 years old and the older children were a great help to me when the twins came along.

I’d put a lot of weight on when pregnant with them – the weeble in A Multiple Birth, 61” high and 60” round the middle! I was determined to lose that extra weight and rather than try dieting I chose to breastfeed as that had always worked for me in the past. 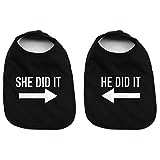 He Did It She Did It Arrow Twin Set Baby Cotton Bibs, Light Blue & Light Pink
Buy Now

How to Breastfeed Twins

I was already an experienced breast feeder so I knew that small babies often feed frequently, and so the importance of feeding them at the same time was even higher on the agenda.

I believed that anyway.

With twins, you can’t alternate breasts the same as you can with one baby and two breasts, so you alternate the babies at each feed. With twins, one is often a stronger sucker than the other so if you alternate each baby they both get a chance at different feeds of suckling at the other breast which should keep your boobs at the same size if nothing else!

So, I was all prepared for breast feeding my twins. While I was still in hospital, I fed them separately because there was not room on a hospital bed to position the babies correctly, although the midwives did help me position them once, they did not have the staff to spare to supervise in case one child fell out of bed.

I gave them the odd bottle in hospital because it was easier, much to the disgust of the midwives, especially when I allowed them to share the same bottle! Of course, a hospital is a supposedly sterile environment, and I didn’t see the harm (and still don’t). These babies shared everything together. If one got a bug, the other was bound to get it too.

Twin Breastfeeding Pillow -Do you Need One?

We got home and I breastfed my babies together either in our king size bed, or in a comfy armchair with the help of a couple of pillows.

You can buy a twin breastfeeding pillow specially designed for two babies, but I found I managed well enough without one.

Our house always had plenty pillows to spare, so I kept them around the place, so that even in the lounge I could comfortably breastfeed my twins.

A breastfeeding pillow is not essential, but if you can afford one at a time when your family's budget is strained, perhaps because of lack of work or because mum had to give up work, there is a nice selection of twin breastfeeding pillows at Amazon.

Twins have to be held in a different position to feed than a single baby. They generally have their bodies tucked under your arms, and their two little heads close together in front.

All was well. They were feeding 2 hourly, and I got used to falling asleep with a baby tucked up close in bed, surrounded by loads of pillows for support.

The diagram below can give you some ideas in ways to hold the babies to allow them both to feed together.

But then they got out of sync – badly out of sync. One would wake for a feed and the other WOULD NOT AWAKEN! Nobody ever warned me that might happen!

I think of all the wasted years I spent tip-toeing round sleeping babies, fearful of wakening them. I learned a valuable lesson. A sleeping baby will not be woken if it doesn’t want to be.

I’d pick that sleeping baby up, resisting the strong temptation to shake it wide awake seeing as there have been loads of court cases where babies have been irreparably damaged while being shaken.

But I’d nip them (gently), change their diaper, put loud music on, anything I could think of, but that second baby wouldn’t wake up! By this time the other was bawling loud enough to wake the dead, but not her twin sister!

So exhausted and exasperated, I’d settle down to feed the one baby that was awake. She’d feed and fall back asleep. Just as I’d be drifting off to sleep again myself, the other baby would stir, and then scream.

This went on for at least a week, but it may well have been a lot longer. I have photographs taken of myself during this period and my face was all drawn in and pale, with wide staring eyes, and my hair looked as if I’d been dragged through a hedge backwards.

And this was after I’d got washed and dressed!

For 24 hours, round the clock, my babies woke and fed alternately, leaving me something like half an hour to myself in between.

Have you Breastfed Twins?

It was so bad my doctor arranged a Home Help to come in every morning and do my housework. But that didn’t really work, because the Home Help was a neighbour of mine, and rather than risk her talking about me about how dirty my house had become, I made a special effort to clean up the worst parts every morning before she arrived.

My babies never did go back to feeding together. One used to gurgle away quite happily while I fed the other, and wait her turn. In a lot of ways that was easier for me as it is much easier to only have one baby on your lap at any one time, and it left my hands free to perhaps operate the TV remote control.

Remember that when you are breast feeding two babies at the same time, both your hands are occupied holding the babies, so you can’t even sip a cup of tea.

Books about breastfeeding twins at Amazon

What to Do When You're Having Two: The Twins Survival Guide from Pregnancy Through the First Year
Buy Now

When you are breastfeeding, it is vitally important to eat well and this is especially true when breastfeeding twins. Your babies will not go short of nutrients, YOU WILL! I couldn't have taken in enough calcium, for example, while breastfeeding twins because a couple of my teeth crumbled a bit during this period.

It is really important to eat a healthy, balanced diet - not eating for two, or three as in my case, but the importance of making sure you ate a least the daily minimum nutritional requirements as decided by your doctor or midwife. It's not the calories you take in, its the quality of the food you should be thinking about. Plenty meat, poultry, fresh vegetables and wholesome foods that will replenish your body and keep you healthy while still providing enough nutrients for your growing babies. None of you need do without while breastfeeding twins. Your breastfeeding diet should contain more wholesome foods than normal, not less.

I breastfed my twins for about six months and yes I did lose a bit of weight that bounced straight back on as soon as I’d given up breast-feeding. It was many years afterwards before I regained my figure thanks to the Atkins diet, so I am left to assume that somehow having the twins changed my metabolism.

But they are great big bouncing girls today, way taller than me, and doing exceptionally well at school. I hope that in some way their success in life in due to the excellent start I strived to give them, by breastfeeding twins.