Do You Have CIN / Cervical Dysplasia? Calm Your Nerves

When I was diagnosed with HPV and CIN (Cervical intraepithelial neoplasia) or cervical dysplasia, I was really nervous! The doctor told me I had one of the dangerous forms of HPV that have a high risk of developing into cervical cancer down the road, and that I needed to come back for PAP smears and HPV tests twice a year instead of once a year. At 23, I was kinda freakin'!! First, I didn't know where I got it, because my then-fiance, now husband were abstinent at the time, and second, I did NOT want to get cancer.

The doc said that it would hopefully go away on its own, that there wasn't any cure or medicine for it, but to just come back in six months and see if I still had cervical dysplasia. I was already a healthy eater, but still decided I was going to eat more veggies and see if that helped.

I came back to the doctor in August 2011 for a retest and was called back in the next week only to be told that I had not only NOT gotten rid of my HPV/cervical dysplasia, but that it had, in fact, worsened. What!? Yes. Worsened. My condition had developed into low-grade epithelial lesions, meaning there were actual lesions on my cervix, precancerous material forming there. The doc said I needed to have a colposcopy and a biopsy to rule out any cancer at that point.

Gosh, I was freaking out that this point, REALLY? I might have cancer?

I went in again at the end of August and had my colposcopy and biopsy, which did come back as benign, thank the good Lord, but at that point I just knew, being the foodie that I was, I just knew there had to be something I could eat, or a supplement I was missing, that was allowing these cells to grow.

So I started doing some research.

Several internet articles, message boards, and testimonies of others spoke of two plant extracts from cruciferous vegetables, along with folic acid, cured them of cervical dysplasia within 4 months.

The two plant extracts were:

Both of them come from broccoli. One vegetable I eat maybe once a week, if that! Although I love veggies and I know they are good for your health, broccoli doesn't end up on my plate near as much as it should, and if it does, it's not organic--it's usually frozen, because that is the cheapest.

I figured what the heck. Let me give it a shot and see if I can cure cervical dysplasia. I picked up enough folic acid, DIM, and i3c for four months, and I took it religiously.

I went back in for my follow up PAP and HPV test four months later. A week after I had the test done, the doctor's office called to let me know that everything came back CLEAN.

I was absolutely overjoyed.

I called my mom, posted all over facebook, and let every woman I know know that I had cured my cervical dysplasia, I had done something my doctor said I couldn't do on my own. The receptionist on the phone even asked me for the names of the remedies I'd used and wrote them down. It was just a regular women's health doc, not a doctor of natural medicine or anything, and considering only around 6% of doctors these days have nutritional education, I wasn't really surprised!

To this day I continue to take all three supplements -- i3c, DIM, and folic acid, in hopes that these powerful plant extracts can keep cancerous cells at bay. I truly believe they will.

Get a $10 Coupon for Vitacost

I buy my supplements from vitacost. They are about $17 for a four-month supply of each. I take 2 DIM and 1 i3c every day. If you use this link, you will get a $10 referral coupon from vitacost. I got my folic acid from CVS when the supplements were Buy One Get One free. 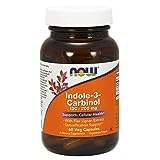