Living a Normal Life with Tinnitus

What causes the ringing in your ears?

Medical experts say that tinnitus is merely a perception of sounds which means that it does not exist in reality and therefore does not pose a serious threat to the patient's health.

Tinnitus is the feeling that a tinnitus sufferer gets when he hears sounds in his ears without any identifiable external source. People suffering from tinnitus describe the sounds that they hear as hissing, ringing, whistling, buzzing, or roaring sounds.

The most common cause of tinnitus is exposure to very loud sounds such as sounds coming from a lawn mower, a gunfire, from power tools and various machinery.

The ringing in your ears is caused by damage to the stereocilia, those very tiny organelles that act like sensors in the inner ear.

The damage is most likely caused by very loud sounds that the individual has been constantly exposed to such as industrial machines, gun shot sounds, very loud music, various power tools.

Under normal conditions, the stereocilia make moderate movements when they receive sounds in the level of 80 decibels. These movements signal the release of molecules located at the roots of the hair that is responsible for putting the auditory neurons into action in the 8th cranial nerve.

When a person is exposed to very loud sounds, for example at 85 decibels or higher, the stereocilia is forced to bend further than normal. This is when a person starts to hear all sorts of sounds in the ears - ringing, buzzing, hissing - and consider it to be tinnitus. This happens when the hairs found at the cochlea react to the very high-pitched sounds they receive and are in fact the important parts of the ears that are first to be damaged by these very loud sounds.

Damage to the stereocilia can be reversed if the causes of damage are less severe and less frequent.

Dr. Gayla Poling, Director of Diagnostic Audiology at Mayo Clinic says that 90% of those with tinnitus have hearing loss so she said hearing loss is really the most common cause of tinnitus.

How to live a normal life with your tinnitus

To minimize your suffering, you should manage your tinnitus. Control it, conquer it for your own sanity. Don't let it bring you down, don't let it ruin your life. The show must go on.

2. If you are in a quiet place and the noise is irritating, cover it up with the sound of soft music, a fan, or any other sound to make you ignore the ringing in your ears.

3. If you drink alcohol regularly, reduce your consumption.

4. Avoid stress. If you feel that a person, a thing, or a situation has been the cause of your stress, then avoid them. If you know that that particular situation is going to cause you stress, avoid it. If a person irritates you or makes you uncomfortable, then avoid that person. If a thing or object does no make you happy, then dispose of it or don't come near it.

The experts on the subject of tinnitus, the otolaryngologists and audiologists agree to the definition of tinnitus as a kind of sound that has no external source and further classify this topic into subjective and objective tinnitus.

Subjective tinnitus is when a patient seems to have heard something but without actually hearing a sound and is usually heard only by the patient himself. Most tinnitus cases are of the subjective type.

The most common diseases that may cause the subjective type of tinnitus are those that involve sensorineural hearing loss disorders, particularly acoustic trauma or noise induced hearing loss, aging or presbycusis, ototoxic drugs and Meniere's disease.

Sensorineural hearing loss occurs when sound makes it to the inner ear but once it's there, the signal is not recognized, or it is misinterpreted because of damage to the tiny fibers in the inner ear, the central hearing nerve of the brain itself.

People with this type of loss often experience a ringing or buzzing sound that occurs intermittently or constantly. For many, this is worse than hearing loss.

For sensorineural losses, treatment can range from using a digital hearing aid, which works extremely well with some patients, to cochlear implants appropriate for people with specific inner ear problems. 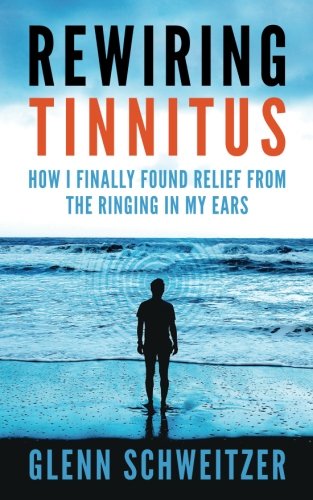 Rewiring Tinnitus: How I Finally Found Relief From The Ringing In My Ears

I never thought I would find and finally read the story behind the writing and publication of this book by the author, Glenn Schweitzer. In 2011, the author was diagnosed of a rare and debilitating disease called Meniere's Disease. The sound would drive him crazy. It tormented him day and night.

Now, the noise is still there but he lives a normal and happy life. Thanks to this kind of treatment that he discovered. It drastically changed his life and the noise does not bother him anymore.

Learn how he did it from this amazing book.

Presbycusis is caused by the natural process of aging as the sense of hearing is probably one of the first senses that is affected when a person gets older.

Otosclerosis is hereditary which means you got it from either your mother or father, characterized by an unexpected growth of a bone near the middle ear which could lead to a person's loss of hearing.

Ototoxicity is the state of an object or substance that is damaging to the ears particularly to the auditory nerve (cochlea) and the vestibular system. It is one of the more common causes of hearing loss. The medications taken by an otherwise healthy patient may be gradually and silently damaging his cochlea.

Ear-damaging drugs that may cause sensorineural hearing loss and loss of equilibrium are:

Another antibiotic, erythromycin, can also damage the ears but it is reversible with proper treatment.

Meniere's disease is a disease that affects the inner ear where the person experiences hearing loss, vertigo and tinnitus. The loss of hearing happens in each ear at separate occasions and eventually becomes permanent.

Hearing loss occurs when the hair cells in the ears are over stimulated which leads to the production of reactive oxygen species leading to oxidative stress that eventually cause cell death.

The best protection from extreme noise is wearing of earplugs or ear muffs.

Objective tinnitus means sounds are not being conducted or not getting through to the inner ear at all where the interpretation of sound occurs.

These include obstruction of the ear canal by cerumen or earwax, a foreign body, or external otitis. Otitis media, barotrauma, eustachian tube dysfunction, and otosclerosis may also be associated with objective tinnitus.

Temporomandibular joint dysfunction or TMJ, a dental related problem, may also be associated with tinnitus in some patients.

Objective tinnitus typically follows the beating of the heart, or it comes intermittently. In this case, tinnitus is most noticeable in quiet environments and in the absence of distracting stimuli and becomes worst at bedtime.

Patients who experience severe tinnitus are believed to suffer from MDD or major depressive disorder but those who experience mild ringing in the ears are said to be neither severely depressed nor bothered by the sounds in their ears.

One kind of disruption that occurs in the ears is otitic barotrauma which is usually experienced when a person travels by air. This happens when the middle ear becomes inflamed due to the difference in the air pressure between the middle ear and the atmosphere outside the ear which occurs during take off and landing.

This is characterized by feeling of fullness in the ear, temporary deafness and otalgia and can result to damage to the tympanic membrane and rupture of the membrane of the round window.

There are at present three methods in treating tinnitus: physical, psychosomatic and chemical. The chemical method seems to be the most effective as it is user friendly, it takes a little time to use, gives a more accurate result and it does not rely too much on the patient's intellect and active participation.