Hypnosis for beginners: an introduction to hypnotism

My first brush with hypnosis

It's amazing what you can find on the internet these days. A few clicks of the mouse, a phone call, a cheque in the post, and hey presto, suddenly you're on your way to acquiring uncommon knowledge, the key to the sub-conscious. One day I was at home, watching a lady on TV hypnotising a patient prior to surgery, and then just two short weeks later I was in a high-ceilinged draughty room on a wet November day, waiting for the mysteries of the human mind to be unravelled before me.

There were twelve of us in the room, a doctor, three salesmen, a student, a chef, a social worker, a delivery van driver, a pharmacy assistant, a nutritionist, a teaching assistant, and me. We were all there with a common purpose; to learn about hypnosis. We would, we were assured by the course leader, be able to perform simple hypnosis after just two days. Two days! If it were that easy to learn, why weren't more people able to do it? Was I sceptical? You bet!

Losing weight through hypnosis and suggestion

Now, I don't know what exactly I was expecting, but I'd seen hypnotists on the tv, and I somehow assumed that the actual act of hypnosis was somewhere between a Vulcan mind meld and a conjuring trick. How could you get people to change their behaviour simply by talking to them? It seemed unlikely, and even though I'd parted with a wad of cash to be there, I still wasn't completely convinced. The day, for me, did not start well. After a formal introduction, Christina, one of the course leaders explained exactly what hypnosis is all about, and then she attempted a mass hypnosis on all twelve students.

As I listened to her soft, slow, words, I began to feel increasingly mutinous. What was this supposed to achieve? Apart from my eyes being closed, I felt no different. I listened to the phrasing, the cadence, the rhythm of her lingeringly, undulating voice, and let myself relax. It felt good to be sat there so still, so still and so comfortable, and able to concentrate on her words, yet at the same time free to let my mind travel wherever my inclination and imagination would let me go. Sunlight broke through the clouds and shone into the room, warming our faces. I began to nod. How pleasant to be sitting there dozing whilst Christina's words continued to wash over me, like waves on a beach, like ripples on a pool.

"Now" said Christina, "I'm going to count you up, and when I get to 10, I shall say ‘Wide awake!' and you will stretch and open your eyes, and awaken fully alert and refreshed. One, body energies rising, two, still very relaxed but becoming more aware, three, four, five, six. Your eyes feel as though they have been bathed in fresh spring water. Seven, eight, nine, ten. Wide awake!"

Stretching and yawning, I opened my eyes and found my fellow students similarly engaged. So what was all that about then?

On your marks. Get set. Go!

The weekend continued in much the same vein. Volunteers went to the front and were ‘hypnotised'. We learned a little about the uses of hypnosis, and the nature of trance, and a little about NLP (Neuro Linguistic Programming). I talked to the other students in the breaks and began to panic a little. I just didn't get it, whatever ‘it' is. Surely hypnosis is an altered state, not just a feeling of pleasant drowsiness like nodding off in front of the tv after too many mince pies and brandy on Christmas Day?

On the final day we were invited to pair up and practise on each other using prepared scripts. ‘"Don't forget to speak slowly and clearly, and elongate your words!" Christina instructed, as we chose our partners and shuffled our chairs around.

"Fix your eyes on a point on the ceiling," I murmured to my partner, in the slowest voice I could muster, "Now take three, deep breaths. That's right." I continued my way through the script trying to pace myself to match the speed of the other students sitting around me all reading the same words at more or less the same time. My partner's eyes closed at my prompt, and he soon began to breathe more deeply. Was he hypnotised yet? I hadn't a clue, but I soldiered on, all the time aware of the mesmerising effect of the echoing voices around the room. There were suggested pauses written in at strategic points, and at each pause I would anxiously gaze up at the wall clock and watch the second hand tick round. Then finally, phew! I‘d come to the end. "Now I'm going to count from one to ten. One, body energies rising...." I continued on to ten, but my partners' eyes pinged open after five, and he looked suspiciously bright eyed and bushy tailed.

Now it was my turn to be guinea pig, and I settled down to enjoy five minutes shut eye. At least I could start composing a shopping list for the morning whilst I had a free moment. My partner had a pleasantly low voice, and a soft delivery. I obliged him by closing my eyes almost immediately and settled down to noticing the rhythm of my breathing, and allowing my toes to go loose, and limp, and lazy. It was so comfortable on that hard-backed chair, that I felt lighter than air, lighter than thistle-down, as light and as free as a wispy white cloud floating high above the earth in a perfect blue sky. The words washed over me, mellowing me, warming me, teasing me, leading me, echoing all about me in half a dozen different voices. And then it was over. "Ten," he intoned "Wide awake!" I yawned and stretched. "Thank you," I said, "That was lovely" and I meant it.

What Amanda did next, or how I became a hypnotist

And now, dear reader, you will be wondering whether this was the end of my brush with hypnosis, and I have to tell you that it was not. I signed up for the full ten month course, and finally graduated with a diploma in Integrated Hypnotherapy. I've found this ‘uncommon knowledge' to be mostly beneficial, and I've certainly been able to help many people through the use of these skills. Would I recommend hypnosis? Certainly, it's always worth a try, although not all interventions are guaranteed to be successful. My only caveat would be to always check that your hypnotherapist is properly trained and insured, and preferably go by recommendation. 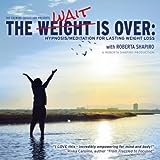 The Weight Is Over : Hypnosis/Meditation for Lasting Weight Loss
Buy Now