The Health Benefits of Vitamin D

I like to write about health and how to stay healthy by making smart decisions.

Aspirin has often been called the “wonder drug”; however, a closer look at vitamin D reveals that this well known vitamin may be the actual “wonder drug”, due to the myriad health benefits provided by vitamin D. Maintaining sufficient levels of (OH)D (also known as 25-hydroxy or calcidiol) in one’s blood serum, which is produced in the liver from the metabolism of vitamin D3, appears to have many beneficial effects on a person’s health and well being. The beneficial health effects of maintaining sufficient levels of 25-hydroxy go far beyond the widely known beneficial role vitamin D plays in maintaining healthy bones and teeth. Some doctors and nutritionists are advocating for much higher vitamin D daily recommended intake amounts than the United States government recommends, in order to take full advantage of vitamin D’s positive impacts on human health.

Vitamin D is a group of fat-soluble molecules called secosteroids. The two forms of vitamin D which are relevant to human beings are vitamin D2 (ergocalciferol) and vitamin D3 (cholecalciferol). Unlike other vitamins, which humans obtain exclusively from what they eat and drink, vitamin D is also obtained via photosynthesis when humans are exposed to sunlight. Vitamin D3 is produced in the skin of humans when the skin is exposed to ultraviolet B light from the sun or artificial sources. Vitamin D3 is also present in fish, egg yolks, mushrooms, and some other foods. It is also added to many staple foods, such as milk and flour to artificially fortify the foods with vitamin D. Vitamin D is also available as a supplement in both multivitamins and as an individual supplement pill, for those who wish to increase their vitamin D intake.

As of June 2011, the recommended daily for vitamin D intake established by the United States government’s Food and Nutrition Board (FNB) sufficient to maintain bone health and normal calcium metabolism in healthy people is 600 international units (IU) for children and adults up to the age of seventy (70) years and 800 IU for seniors seventy (70) years an older. The reason why the recommended vitamin D intake level is greater for people over seventy (70) years of age is that the ability to synthesize vitamin D naturally in the skin declines with age and many older people do not spend as much time in the sun as their younger counterparts.

There are a growing number of doctors and nutritionists who believe the United States government’s recommended daily intake for vitamin D is far too low, as additional medical research indicates that higher levels of vitamin D intake and resulting higher levels of 25-hydroxy blood serum are necessary to take full advantage of vitamin D’s positive health effects. While not mainstream recommendations as of yet, some doctors and nutritionists are now recommending daily vitamin D intake of between 2,000 IU and 5,000 IU to maintain beneficial levels of 25-hydroxy blood serum and to replace the 3,000 IU and 5,000 IU of vitamin D that the body uses every day. These doctors and nutritionists are not worried about people reaching 25-hydroxy blood serum levels that are considered toxic because a much higher daily intake is necessary to reach toxicity. They argue that exposure to sunlight in the summer causes the human body to naturally generate 10,000 IU or more of vitamin D per hour with no ill effects.

Vitamin D and Your Health

Vitamin D and Prevention of Colds And Flu

Perhaps the most intriguing recent health benefit discovery regarding vitamin D and maintaining adequate 25-hydroxy blood serum levels is the finding that vitamin D reduces the risk of developing respiratory infections from the common cold and influenza viruses. It does so by increasing the formation of proteins called cathelicidin and defensins, which have antiviral effects that combat cold and flu viruses and by reducing inflammation in the body, which lowers body temperature and causes the lining of the lungs is be less disturbed. These Vitamin D effects on the body make it harder for viruses and bacteria to take hold in the lungs and limit the development of colds and flu in the human respiratory system.

It is interesting to note that the cold and influenza season coincides with the winter months of the year, when humans have much less exposure to natural sunlight and produce little or no vitamin D from sunlight exposure. The reduction of vitamin D from sunlight and inadequate 25-hydroxy blood serum levels during the winter months could very well play an important role in the ability of colds and influenzas to spread and infect people who’s vitamin D defenses are reduced during this time of the year, which is why it is important to maintain Vitamin D intake during the winter months.

The wintertime reduction of vitamin D from sunlight exposure and the resulting drop in 25-hydroxy blood serum levels might also contribute to major depression and wintertime Seasonal Affective Disorder (SAD), also known as the wintertime blues. Although research and studies into the connection between vitamin D and its effects on depression are limited, some studies have been performed that found vitamin D to be effective in improving the mood of persons with 25-hydroxy blood serum levels that are maintained above 40.0 ng/mL.

The health benefits provided by vitamin D and maintaining adequate 25-hydroxy blood serum levels throughout the year are becoming more evident with each passing year. Vitamin D has so many health benefits that it truly acts as a sort of “wonder drug” when taken at doses high enough to maintain beneficial 25-hydroxy blood serum levels. Like anything, too much vitamin D can be harmful and certain health conditions can be negatively affected by increasing vitamin D intake, so it is recommended to consult a doctor or other health care professional prior to changing one’s diet or vitamin supplement intake.

Although I eat a diet that includes many sources of Vitamin D, I ensure I get enough of this important vitamin by also taking supplements on a daily basis. I have been taking Nature Made's Vitamin D3 1000 IU (25 mcg) tablets for many years and have been happy with their quality and effectiveness. 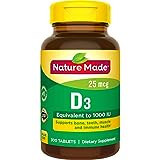 Do You Take Vitamin Supplements?