The importance of laughter

The Benefits of Laughter

The body and mind can be fooled in countless ways. Believe it or not, doing the action of laughing when you don't feel like laughing is one of those ways. You can be made to feel better just by the physical act of faking laughter.

If you're in a blah mood, or better yet, in a lousy mood, do the experiment. Pull your lips up into a smile and do the "ha ha ha" "hee hee hee" of laughing. With your face in a smile, make laughing sounds for a couple of minutes.

When you stop this exercise, does the smile stay on your face for a bit? Do you feel a little lighter of heart? Try it for a little more each day, and see how much it improves the rest of the day. Do it for up to 15 minutes if you can.

If you find this difficult to do, go to YouTube and find some funny videos, ones that don't just make you smile, but make you laugh. I've included a couple of videos below to help you along the road to laughter.

Laughter therapy to fool your mood is no different than creating an optical illusion to fool your eye. Stare at these circles for a bit and you'll see them begi

A long, happy marriage is often built on laughter

Laughter and health? Laughter and stress? When you laugh more, your health goes up and your stress goes down

I had read about using fake laughter to lift the mood and to benefit health several years ago. Then, one morning when I was in the doldrums and couldn't seem to shake that low mood, I tried putting a smile on my lips and making laughing sounds.

And I felt better! I've used that routine many, many times since then. Once when something terrible happened, and I was trying not to cry in public. I went into a bathroom for privacy. When I discovered that I was alone in there, I did the laughing method, and came out of the bathroom completely in control of my emotions, as if the fake laughter had lent me a new resilience.

Our bodies can be fooled in a variety of way. We can look at a some patterns and our eyes see them as moving, or as something completely different than they really are. When we get to dry land after a long boat trip we can feel that the solid ground is moving. We can do physical exercise and reduce the stress hormones circulating in our bloodstream, even though the source of the stress hasn't been removed. These indicate the ways that we are structurally built, or wired. How many methods can we apply to take advantage of our structure and of its inherent limitations of perception? We can use the natural structures of our bodies, our brains and our emotions much more to improve our quality of life than we've been taught so far to do.

Sometimes, reminding ourselves to simply say, "I CAN do this" or "I WILL do this" when we were telling ourselves a minute before "I CAN'T do this" makes all the difference in accomplishing what we're trying to accomplish. It becomes a self-fulfilling prophecy, either way.

So why not use the tips and tools we find to raise our mood? A good mood is good for your health, and laughter raises your mood. That's been measured and proven.

A study in Spain showed that self-induced laughter has the same effects on the body, and releases the same beneficial hormones, as spontaneous laughter.

If you don't feel like laughing because you're depressed, then laugh without feeling like it. The feel-good neurotransmitter serotonin increases when you laugh, so when you start to laugh, you may actually feel more like laughing as you do it longer.

People who laugh more have measurably stronger immune systems. When we're sad, we are sick so much more often than when we're feeling that life is good.

Especially important for today's world, laughter reduces stress, just as exercise does. So if you want to keep your stress hormones lowered, laugh and exercise.

Laughter is a great bonding tool, too. It bonds family members, lovers and friends. It keeps conversations going. It demonstrates resilience in terrible situations. It can create friends next to you where only strangers stood before. (Of course, I'm talking here about laughter that's inclusive.)

People laugh most often together. So, if you're lonely, does doing laughter therapy help you to feel less lonely?

A University of Maryland study found that people laugh about 30 times more often in company than they do when they're alone. Of course, that study was done before we communicated with each other so much online. Where did "lol" come from? It was created to let someone know that either you're laughing as you write something, or that they were funny enough to make you laugh out loud. (Some people write "lol" in every other comment and tweet. Are they gigglers face-to-face?)

A study at Indiana State with cancer patients showed that laughter increases killer cell activity against cancer cells - killer cells come from the immune system. And that was measured simply by showing cancer patients either a tourism video or a funny video. The women who were shown the funny video had the higher resulting killer cell activity afterward. (Some hospitals have become smart enough about the power of laughter to include laughter yoga clubs in their facilities.)

The study of the benefits of laughter and happiness is called psychoneuroimmunology. Of course, that's the medical establishment draining the fun out of laughter, in their own uniquely funny way. You could more easily say in the same time, "Laughter makes you healthier". The message would be more clear for the average person, and it would even take one syllable less!

In Japan, mothers of both healthy 5-6 month old infants and mothers of infants with allergies were tested to see what effect laughter had on their breast milk. The study found that mothers who were shown funny videos had increased melatonin in their breast milk. For the infants with allergies, such as dust mites and latex, the allergic reactions were reduced.

When I read this study, I had to ask myself if the increase in allergies in our children are not associated with the increased stress and decreased laughter and bonding time with their parents. Breast milk also carries cortisol. Cortisol definitely has the opposite effect of melatonin on an infant. Does that possibly mean that increased cortisol in the mother's milk may increase a baby's allergies? Further study is definitely needed!

The many benefits of laughter are not well studied yet.

There have been far too few studies done on laughter and humor. When you look at the studies located in the U.S., there are even less available.

Laughter is considered "alternative and complementary medicine" in the U.S. This isn't surprising, considering that laughter is free. You can't patent it, put it in an expensive pill or add it in a butt lift.

However, for something as pleasing as laughter, it's very lack of cost is fortunate for us. Laughter is some of the best healthcare you can have - and you can do it for yourself; you don't need a professional.

If you have diabetes, laughter helps to reduce high blood sugar. Whether or not you're a diabetic, laughter increases your glucose tolerance - a great piece of information for pre-diabetic people.

If you have chronic pain, laughter can actually reduce your pain because it causes the release of endorphins. If you don't feel like laughing because you're in pain and neither pills nor cognitive therapy seem to make it better, you could try laughing to produce your own pain-reducing endorphins.

People in happy marriages that have lasted throughout their adult lives invariably say that their mate makes them laugh. If they're being interviewed together, they joke and laugh together while they're talking.

People who have a work environment that encourages laughter have been shown to be more creative than people who are in your run-of-the-mill quiet cubicle work environment. People whose supervisors cause them to laugh tend to regard their supervisors as more effective, and the same holds true with students when evaluating their teachers. Laughter is interesting, stimulating and fun.

If you have high blood pressure, laughter helps to reduce it. It actually acts on the lining of the blood vessels, allowing the vessels to relax. Laughter is healthy for both your heart and your brain, because both organs need good oxygen supplies, and laughter relaxes blood vessels so that oxygen can be delivered where it's needed.

A study in Maryland showed that the lining of the blood vessels, where hardening of the arteries begins, is helped to remain healthy and smooth by two different activities - aerobic exercise and laughter. Armed with this information, University of Maryland's Dr. Michael Miller added a minimum of 15 minutes of laughter per day to the minimum of 30 minutes of aerobic exercise 3 times a week as recommendations for healthier living.

And, when looking at the stress hormones, laughter dials them down. The main stress hormone, cortisol, is very effectively reduced.

A 2001 study followed two groups of people who had already had a heart attack. The only difference in their care was that one group watched 30 minutes of comedy a day and the other didn't have any more laughter in their day than they normally would have. At the end of the year, the comedy-watching group had fewer repeat heart attacks. They also had lower cortisol levels, lower blood pressure, and fewer episodes of irregular heartbeat.

So laugh. As often and as long as you want. Laughter is one thing that you can enjoy thoroughly, knowing that it's also very good for you.

Books to Bring Laughter and Health 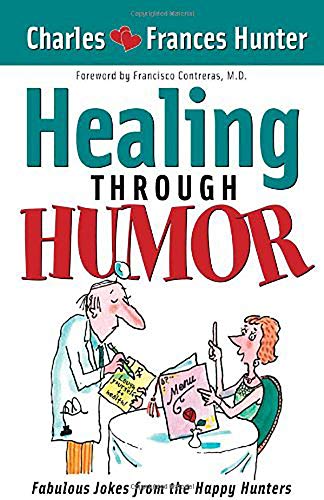 Laugh Yourself Healthy: Keep the Doctor Away―With a Giggle a Day!
Buy Now

Comments about Laughing for your health