Mishri or Crystallised Sugar, Its Health Benefits and Why It Is Different From Rock Candy

Rajan is a botany and chemistry major. He has an interest in home remedies.

Though Mishri is a type of sugar & is also known by other names like rock sugar, crystallised sugar, rock candy, candy sugar, sweet diamonds, etc, it is completely different from the ones named above

An Overview of Mishri

Mishri is a unrefined form of sugar and Hindus offer it to deities as part of worship as it is pure. It is then distributed to as prasad to devotees.

Mishri has been used as medicine in Ayurveda for centuries and many herbal/Ayurvedic formulations incorporate mishri into their syrup & churnas. It's usage is also advised in place of refined sugar.

Mishri originated in India and Persia in the early half of the ninth century when it was first produced by cooling super saturated solutions of sugar onto strings, sticks, twigs etc to form large crystallised sugar lumps. Its large crystals are pure and attractive and in olden days it was used to sweeten milk, sweets, beverages and more. Even today some people prefer mishri over refined sugar as it is much healthier though a bit expensive.

In the photo of mishri above, you can clearly see mishri crystallized on the thread. In the ones not visible if you break the crystals you will see the thread.

You can always purchase mishri from a pansari shop (a shop mainly selling spices and herbs) and even shops selling stuff for puja or worship. I have been buying mishri from both these places and find it to be genuine. Always ask for dhage wali mishri or the mishri with thread. 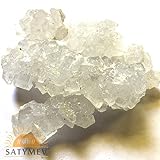 Legend has it that Lord Krishna as a child was very fond of makhan/white butter and sweets. His mother would feed him makhan misri/sweetened white butter. This is why an offering of makhan mishri is made to him on Janamashtami, his birthday.

Some Other Forms Of Crystallised Sugar Sold as Mishri

Mishri is also sold in the forms as seen in the two photos above:

It must be understood that to be absolutely sure that it is really mishri that you are buying you must make sure that the thread is visible as shown in the main photo at the top of the article. You can clearly see the crystals and when you break any crystal it will always show a thread.

Today machine made even sized crystals of sugar are also packed and sold as mishri. Whether it is mishri or not is difficult to say.

Strictly speaking, rock candy, candy sugar are a confection as various colors & flavors are added to it before crystallizing them. Crystallized sugar also has refined sugar as its base ingredient. Mishri on the other hand has raw sugar as its base. There is nothing refined about it.

This difference may seem small but is the reason for mishri providing many health benefits and is not as harmful, unlike refined sugar, when consumed in moderation. It is, basically sugar, but not refined in the least, so no question of chemicals having being used in its preparation. Being a sugar its use should be as less as possible though.

Mishri is less sweet compared to sugar and tastes somewhat different too. You will notice this when when you consume any beverage prepared with it.

Mishri is popular with makers of homemade fruit liqueurs

Mishri and sugar are both crystallized forms of sugar derived from a common source, sugarcane or sugarcane juice. However, the similarity ends there. There is a world of difference between the two not only in their physical appearance and their effects on our body but the way in which both are produced. The following details will help you understand why mishri is way better than sugar.

Sugar is produced by boiling sugarcane juice and clarifying the juice of what is considered impurities, which, in fact, are useful components of raw sugar. Then it is refined & processed repeatedly with many chemicals and bleached to get a final product which is shining white and crystal clear. Some of these chemicals are styrene, divinylacetylene benzol, benzol peroxide, polyvinyl alcohol, bentonite, concentrated sulfuric acid, methacrylic acid, sodium hydroxide, methyl chloride, diethylenetriamine (DETA) etc including bone char which is calcinated animal bones used to decolorize the sugar.

It should also be understood here the grave risk we are putting ourselves to when consuming refined sugar as it could be an agent of mad cow disease because of the bone char being used in the filteration of sugar could be from infected animals.

This use of deadly chemicals and removal of its useful components including minerals makes sugar not only nutritionally zero but very unhealthy. These very chemicals also make the sugar acidic & heating in nature and making it more difficult to digest.

Coming to mishri though it is also prepared from sugarcane juice, during the above sugar making process, a stage is reached when a unrefined, light brown colored, slightly dirty looking sugar is formed. This is before clarification of sugar is started. This is called boora or khand or raw sugar. Some amount of this raw sugar is kept and sold to people who make mishri while the rest is used to produce white sugar.

To make mishri this raw sugar is put in large containers. Water & milk are added to it and it is heated & boiled for several hours till it reaches a one string consistency. This is transferred in containers in which strings are suspended, and kept in cellars so that they are not exposed to air & light, and left undisturbed for 8 days for the mishri to crystallize over these suspended threads/strings. The crystallized mishri lumps are then sun dried.

The entire process of turning raw sugar into mishri imparts many beneficial properties to it like making it alkaline, cooling in nature, light & easier to digest.

Uses and Health Benefits of Mishri According to Ayurveda