Lecithin: the little pill that changed my life

For the first 30 years of my life I suffered from what would today be called bipolar disorder which I guess, was being called manic / depressant when I was growing up, coupled with a panic attacks triggered by any social engagement and you have the man who stand before you today. I have no regrets with this history, for within those disorders my creativity flourished and the talents which I harness today were developed during that period of my life. Sad or tragic, I became a consummate observer of life, and the relaxation techniques I learned to control my symptoms, served me well in my theatrical career.

The Bipolar Disorder Survival Guide, Second Edition: What You and Your Family Need to Know
Buy Now

Emotions where always at the forefront of my existence, and it was necessary to always maintain an even demeanor, for if I got happy, I know I would get sad, and depression was a physical sensation, (there was an actual physical sensation when depression broke), and I learn to master that technique, either in my poetry or my writing, my sculpting or my art, I learned that if I crated something that I was proud of my depression would break, and I would feel a release, like someone opening up a tap, a calm would come over me and I would feel good once more. The only other way to aleave my ailments was in the movie theater, in the dark and calm of the cinema I would lose myself within the story unfolding and my depression would abate

The other strange disorder was panic attacks which I would experience only when I went to parties, more than just discomfort, but sheer panic, I would close myself off, hide in the corner, and wait for the first person to leave, then flee for the door, then berate myself for not being able to enjoy a simple social occasion. And the strange thing was that I felt absolutely normal at other social gatherings, staff meeting, gathering’s at restaurants, but once a year I would see if I could go to a cast party and bam panic attack.

Well at the age of 30, a friend of mine was raving about a psychic he just saw, now I’m not really into that stuff but I thought why not it might be fun. I forget the name of the man, he was spot on with a lot of things, has happened in my life, he said that I would move to Utah, that I would injure my legs there, and that I should take lecithin.

Now let me premise what I’m about to say here, he did not tell me that it would help my depression, he said it was good for my blood pressure, so that there was no pre suggestive aspect to what changed my life, but an hour after taking the pills my depression broke, and my panic disorder disappeared. My life changed and from a stupid little health food supplement 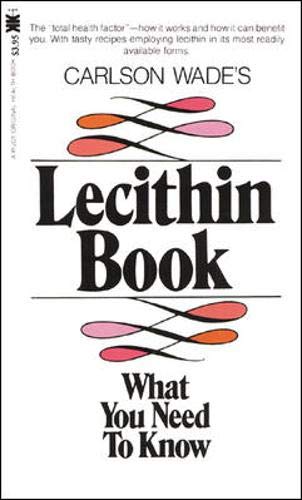 Before Lecithin, my emotions were raw, and I could tap into those emotions for my acting, I literally had to re-learn to act after taking lecithin, there was so much of a change,. For the first year or so I would test myself, I would stop taking lecithin, and in a week or so the blue funk would return, then I would take the pill and within an hour depression would brake once more.

Now I’ve searched the internet, and there isn’t much out there, on this subject, “Lecithin protects cells from oxidation, and helps make up the protective sheaths surrounding the brain”, whatever that means, I also know that it acts as an emulsifier helping mix oils and water together, which I’m sure assists in the conductivity of the electric neutrons within the brain.

I don’t really know how it works, but for 5 bucks, I would say try it, it worked almost immediately for me. I started out with taking 2 1200mg softgel capsules 3 times a day, but now only take it once a day, I’ve tried the powder and combination and concentrated high potency stuff but they never seemed to work as good as the softgel capsules, which cost cheaper.

How my life might have changed if I had discovered this when I was growing up, I do not know, I like who I am, with my talents and creativity, and abilities, which I developed as coping skills for a lot of pain, and loneliness, and frustration, I do know that when I found it, I haven’t stopped taking it for 20 years, I have control over myself, before lecithin so much of my time was spent trying to deal with my emotions, trying not to feel, trying not to be happy because the sadness would come,

But now, I can cope with life as it comes, open myself up to other people, live.

So that how lecithin changed my life, so if you suffer from bipolar disorder, or panic attacks, try it, it’s healthy, it has no negative side effects, it’s cheap, and it might just set you free.