Life On The Borderline: Growing Up With a Borderline Personality Disordered Parent

Mental health disorders are common health concerns in the United States today. Some individuals suffer disabling effects from severe mental illness. According to the National Institute for Mental Health website (n.d.), serious mental illness can be characterized by (a) mental, emotional, or behavioral disorders; (b) current (within the year) diagnosis; (c) meeting diagnostic criteria of the DSM-5; and (d) results in significant impairment of daily living. Borderline personality disorder (BPD) is a severe mental health issue which has detrimental impact on an individual, as well as those around him or her. In this piece, I would like to share a little bit about BPD from a professional, as well as personal, perspective.

The Diagnostic and Statistical Manual of Mental Health Disorders (5th ed., 2013) (DSM-5), is the manual utilized by professionals in the mental health field to assist in making diagnostic decisions and as a tool to guide treatment planning. All personality disorders are characterized by a pervasive, rigid pattern of behaviors and experiences which digresses from the typical expectations of his/her culture. The DSM-5 organizes personality disorders into three “clusters” (A, B, C).

BPD is categorized along with antisocial, narcissistic and histrionic personality disorders in cluster B by the DSM-5. BPD is an all-encompassing instability in the person’s self-image, interpersonal relationships and emotion regulation, as well as impulsivity, and typically begins in the teen years or early adulthood. A person with BPD lacks self-esteem and does not have a clear understanding of his/her own direction in life. There are often dramatic changes in opinions, goals, or values. They characteristically view themselves as being “bad” or unworthy especially when they are feeling unconnected with or unsupported by others.

In terms of relationships, an individual with BPD will form attachments very quickly and will expect the other person to devote all of his/her time to them and can be extremely demanding. S/he can be very caring and nurturing but with the expectation that the other person will reciprocate. Relationships with a BPD person are volatile and he/she will vacillate between believing significant people are “all good” (idealizing) or “all bad” (devaluing). They view all situations in terms of “black/white” and that there are no gray areas.

These individuals have a difficult time regulating emotions and will show severe instability of mood with respect to anxiety or irritability with periods of anger, dread or hopelessness but rarely experiences times of well-being or contentment. They have an intense fear of abandonment and will act out in an attempt to avoid perceived or real abandonment. For example, when a loved one must leave (e.g. go to work or on vacation) or there are unexpected changes in plans, they will display inappropriate anger or panic because they perceive this separation as “abandonment” and internalize it to mean that they are a bad person. Frequently, they will resort to self-inflicted injury or suicidal gestures in order to gain the sympathies of significant others. Due to these attempts, BPD is one of the most lethal mental health disorders with 10%, or one in ten, ending in successful suicide (BPD Resource Center website, n.d.). Furthermore, the success rate of females with BPD is 800 times higher than that of the general population.

Often, they display impulsive, self-destructive behaviors such as promiscuous sexual relations, overspending, alcohol/substance use, or binge eating. Moreover, when they begin to show improvement or come close to completing a goal, they will sabotage their own efforts. For example, they will drop out of school just before graduation. As you can expect, it can be difficult living with someone with BPD.

Who is Diagnosed and Why

According to the DSM-5 and the BPD Resource Center, BPD occurs more frequently in females (75%-90%) than in males and can be observed within a variety of cultures. In addition to that, it is estimated that about 2% of the general population, 10% of the outpatient mental health population, and 20% the inpatient population is afflicted. Of all the personality disorders, BPD makes up about 30%-60% of all patients. It is believed that exposure to long-term, traumatic events, such as repeated sexual abuse or violence in childhood, is one underlying factor in the development of BPD.

Co-occurring disorders, or dual disorders, is a technical term used in the mental health profession to describe when an individual suffers from several psychiatric disorders including depression, anxiety, schizophrenia, or a personality disorder, just to name a few (Daley and Moss, 2002). As discussed earlier, BPD individuals frequently suffer from anxiety or panic disorders, depression and are susceptible to drug and/or alcohol addiction. There are no medications to treat borderline personality, per se, so often the depression and anxiety symptoms that accompany BDP are treated with antidepressants or anti-anxiety medications. As noted earlier, drug and alcohol dependence is a significant risk for the BPD person. A particularly successful psychotherapy treatment for BPD is dialectical behavior therapy.

Christine Ann Lawson, Ph.D. (2002), author of Understanding the borderline mother: Helping her children transcend the intense, unpredictable and volatile relationship contends that actress Joan Crawford may have been diagnosed with BPD. As you will see in the clip provided, Mommie Dearest (1981) starring Faye Dunaway, Ms. Crawford seems to meet the DSM-5 criteria for BPD.

We have all heard the expression “walking on eggshells” and growing up with a parent with BPD is the epitome of this expression. As a child in this environment, you never know what to expect from one day to the next. A child in this environment never feels safe and cared for, never learns how to trust anyone (even themselves). As a matter of fact, often at least one of the children becomes “parentified” where he/she takes on the role of being a parent to the parent, which, as the oldest of three, I became. I was “mother” to my mom and sisters. I did not go out to play with peers or do any of the typical things kids do. I witnessed domestic violence as a result of the instability of emotions and frequent alcohol abuse. I have a specific memory of calling for and riding in an ambulance when my mother overdosed (one of her multiple attempts) and being in the room when they pumped her stomach (pretty traumatic for a 12 year old!). In addition, children in this environment are at risk for physical, emotional, mental and sexual abuse. My youngest sister and I were mostly subjected to emotional and mental abuse. Our middle sister, however, tended to get the brunt of physical abuse. I am sharing just a little of what life was like growing up in a home with a BPD parent in hopes that I can help someone understand this mental health condition and the experiences they may have had. 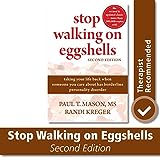 Stop Walking on Eggshells: Taking Your Life Back When Someone You Care About Has Borderline Personality Disorder
Buy Now

Did you grow up with a family member who meets the DSM-5 criteria I described?

Hubs You May Find Interesting