Vitiligo is A Skin Disease

Vitiligo affects the skin and is possibly caused by an autoimmune deficiency, although the actual cause is not known. The condition affects the melanin in the skin causing random, blotchy white/cream spots on the skin.

People who have dark skin and suffer this condition display more noticeable patches, however, it is the randomness of the spots and the parts of the body affected which define what the condition is. Vitiligo is not just pigmentation and in many cases is very obvious.

Initially, the skin may seem to have peeled after tanning but as more spots appear, a visit to a doctor or dermatologist will confirm the diagnosis of this disease, which involves a loss of melanin, the skin pigment that determines skin colouration.

Vitiligo can manifest at any age, it may occur together with Addison's disease, Hyperthyroidism or Anaemia. A rare skin condition, it may run in families but in many cases, there may be no apparent cause.

People who suffer the condition must be very careful when they are outdoors as the spots will burn and are more prone to skin cancers. Sunscreen should be applied whenever outdoor activities are undertaken and hats, as well as long pants and shirts with long sleeves, are a good idea. Try to stay out of the sun between 10 am and 3 pm, the hottest part of the day.

Treatments for Vitiligo are difficult and largely ineffective with many sufferers deciding to live with it. The treatments can be expensive and need strict adherence for them to work. There are many products that "mask" the spots, some people adjust their diet to slow the progress of the condition and many others try all sorts of cures without too much success.

Treatments that are available work best as an early intervention. Ask your doctor or dermatologist about the best treatment course for your vitiligo.

I have used this cream and it has worked to a degree, but it takes time to work. 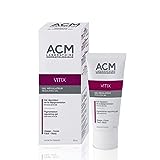 Links and Information about Vitiligo Treatment

Consult your dermatologist regarding any treatment you wish to undergo to treat your particular type of Vitiligo.

SCENESSE® - http://www.medicalnewstoday.com/articles/198954.php A new drug being developed in Australia. Still undergoing testing as it was initially developed for sun protection

Note: Vitiligo causes low self-esteem or depression issues in sufferers hence there are many products claiming to "cure vitiligo". Please beware when such claims are made as there currently is no cure. The above is only a shortlist of products and services available, please consult a medical expert for a full diagnosis.

Many people who have this condition may suffer some negative emotions related to their unsightly spots. Depending on the severity of the patches, especially where the face is affected, self-esteem issues may occur.

Age is also an issue, the younger a person is the more aware they are of their appearance, hence problems occur with their self-esteem. There are some cases where the condition can look unsightly and people think they can catch the disease if they touch a sufferer. This is borne from ignorance of the condition but does cause many negative issues in the sufferer who may go to any lengths, and much expense, to cover the spots.

There are stories of sufferers considering suicide due to being teased and bullied about their strange skin and some stories of people staying indoors at all times so as not to be seen. All this leads to many other emotional problems such as depression, anxiety and self-loathing.

Vitiligo is just a skin disorder, it is not contagious and other than being careful in the sun, there is not much else to worry about. Teasing or abusing someone because they have an uneven skin tone is just horrendous and childish.

One famous sufferer was the Late Michael Jackson and we all know how much emotional pain and depression he experienced, some of which may have been due to Vitiligo and his skin whitening treatment.

If You Need Help with Diagnosis or Treatment Try These -

My Experience with Vitiligo

The first patch of white skin appeared many years ago under my chin on my neck, a patch I thought was peeling skin after a short summer holiday. At the same time, some areas of my skin became itchy, especially on my legs below the knees. The itch was so severe I scratched until it bled.

A trip to my local GP and a blood test confirmed a diagnosis of Hyperthyroidism, causing the excessive itch and possibly the Vitiligo. The thyroid problem is under control with Thyroxine tablets, which is hormone replacement therapy and this also helped settle the itch. The vitiligo, however, cannot be controlled and has spread to my legs, hands and elbows as well as the neck area.

My experience with the condition has not affected my self-esteem, nor have I spent lots of money on trying to cover it, other than using sunscreens to protect my skin. I guess this has much to do with the fact I was diagnosed in my early forties and am not too hung up on my appearance, well, not to the point a younger person may be. Had Vitiligo affected me when I was in my teens, I think I would have had a very different emotional reaction.

Occasionally I see people stare but they don't really bother me as I am happy in my own skin (pardon the pun) and I just get on with life. I do consider myself lucky in that my Vitiligo is mild compared to some, and, my face has not been affected to date.

It is understandable when people who suffer the condition become upset if others comment or stare, it can be quite confronting as there is not much that can be done, a frustration for many sufferers. People without the condition must understand you cannot catch Vitiligo, it is an autoimmune disease that affects approximately 1 - 4% of the world's population, so the chances of catching Vitiligo are non-existent.

Interestingly enough, since being diagnosed with the condition I know of six others who live in my area with the condition, which for a rare disease, is quite amazing. Of the 6 of us, 3 suffer thyroid problems as well.

Having a thyroid problem does not necessarily mean you will develop Vitiligo but the conditions can occur simultaneously. Consult your local physician should you suspect a random spot on your skin may be vitiligo or you are suffering a problem that may be Thyroid related, such as excessive tiredness or sudden weight gain/loss.

My Victory against Vitiligo: A Successful Story and a Practical Guide to Treatment
I have taken a leaf out of this book and am now treating my vitiligo both internally and externally. Progress is slow but I can see some improvement.
Buy Now