Low Acid Coffee for Every Morning (or Late Afternoon)

Millions of people on this planet drink coffee, just like I do. And just like me, they love it. But among those millions of coffee lovers, there are some who suffer, just like I did, from coffee's high acidity. The good news is that there's low acid coffee that I can buy and drink without problems.

To drink or not to drink coffee

There was once a debate around coffee: it is good or bad for us? For more then 50 years scientists have tried to determine the effects of coffee on humans or lab animals. It is said that there are about 19,000 studies on coffee's impact on human health. At first, it was assumed that coffee is bad. Today we know that the truth is yet to be found but there are some good effects too. To resume, coffee can reduce the risk of Parkinson's disease, protect against type 2 diabetes, cirrhosis, gallstone, kidney stones, improve mental performance, help us live longer and so on while it can also increase the risk of heart diseases. For a list of pros and cons I recommend this hub: Is coffee good or bad for you? The pros and cons of coffee drinking.

45% of Americans drink coffee every day.

Americans consume over 400 millions cups of coffee per day.

Coffee is the second most traded commodity in the world ofter oil.

Like any other fruits, coffee have some acid components: lactic acid, acetic acid, citric acid, malic acid, phosphoric acid, quinic acid, chlorogenic acid, palmitic acid, linoleic acid. Coffee's acidity is one of the four attributes that is measured to determine the quality of coffee. The higher the plantation is situated, the higher the natural acidity. Also, a rich volcanic soils produces a more acid coffee.

The chemistry of gastric acid is very complex. Gastric acid has played a big role on digestion and its production depends on many factors including the foods we eat.

Some studies have suggested that coffee may increase acid production while others did not find any link. There are also theories that coffee may allow the acid to leak into esophagus, causing heartburn. But many scientists and doctors (including mine) regard it as a safe drink for stomach. However, they concluded that people that complain about heartburn or acid reflux after drinking a cup of coffee may have other gastric dysfunctions.

Besides its natural compounds, the acid in coffee drinks may increase or decrease depending on the way the beans are roasted and the coffee grounds are brewed. It is said that dark roasted beans and less boiled coffee drinks are less acidic. I read some articles that speak about cold brewing, as a method of lowering the level of acidity. Also, there are other ingredients that we mix in a cup of coffee to enhance or change the flavour like sugar, cream and alcohol, all of them adding their own acidity. 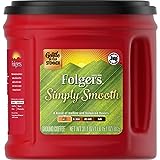 There is a hope

My preferred method to fight gastric problems associated with coffee is to simply buy beans that have a low level of acidity.

Low acid coffee beans or grounds are offered by some companies at the same price as other types of coffee. They drop the acid in beans by removing the chaff, that it is said to be the most aggressive, while keeping the good compounds that help digestion.

So far, I have tried low acid beans from Coffee Bean Direct and Folgers (Simply Smooth).

CoffeeBeanDirect.com is a web site I discovered a few years ago when my favourite brand disappeared from local market. I was very happy with the coffee they have and I tried many kinds including Colombian, Brazilian, high mountains or rich volcanic soil type of beans. I liked the fact that they have a great variety of coffee and a full description of their products. On the other hand, I realized that I was paying a small fortune on shipping. I researched for alternatives. So I found Folgers Simply Smooth which had been on the market for a while. Simply Smooth is a light roasted coffee, with a sweet-sour taste but very flavourful. And the price is reasonable.

All coffee beans low in acid that I had so far worked very well for me. I have not try anything else yet but I'm always in search for adventure when it comes to coffee.

The International Coffee Organization has a Vocabulary that describe the flavor of coffee brew.I try to reproduce the most unusual ones:

"Animal-like
This odor descriptor is somewhat reminiscent of the smell of animals. It is not a fragrant aroma like musk but has the characteristic odor of wet fur, sweat, leather, hides or urine. It is not necessarily considered as a negative attribute but is generally used to describe strong notes.

Chemical/Medicinal
This odor descriptor is reminiscent of chemicals, medicines and the smell of hospitals. This term is used to describe coffees having aromas such as rio (river?) flavor, chemical residues or highly aromatic coffees which produce large amounts of volatiles.

Floral
This aroma descriptor is similar to the fragrance of flowers. It is associated with the slight scent of different types of flowers including honeysuckle, jasmine, dandelion and nettles. It is mainly found when an intense fruity or green aroma is perceived but rarely found having a high intensity by itself.

Spicy
This aroma descriptor is typical of the odor of sweet spices such as cloves, cinnamon and allspice. Tasters are cautioned not to use this term to describe the aroma of savory spices such as pepper, oregano and Indian spices."

I wrote this article a while ago and I wanted to come back and give you an update...

I have been drinking Simply Smooth from Folgers for over four years now and it proved that it was very good for my stomach. I never had a problem except for few occasion when I run out of this particular coffee and I had to drink some other brand. But I was ok as soon as I returned to my low acid Simply Smooth.