Loyalty is the pledge of truth to oneself and others.

Loyalty: To Honor, Trust and Protect

Loyalty is a big deal to me. I guess it always has been.

Loyalty was demonstrated directly in the shape of honor in my family. The youngest of four, I was protected from the proverbial Boogey Man. I always felt cherished and totally accepted.

In my formative years, I also developed trust in those I loved. I was blessed by a relatively normal childhood.

While my family didn't always agree on the little stuff, loyalty ruled when the chips were down. We stuck together as a family and still do.

The Pretenders: I'll Stand By You

I will be loyal to my Clan above everything.

What I want doesn't matter.

The Clan must always come first. 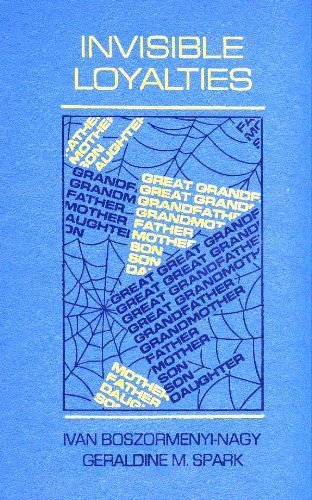 In my college years, I studied nursing, with a specialization in psychiatric / mental health issues.

In psychology and family dynamics courses, I was gratefully reminded that my upbringing was kinda normal.

In 1982, in the Psychiatric clinical rotation of my BSN program, I was assigned to Eastern Pennsylvania Psychiatric Institute (E.P.P.I.) in Philadelphia. Co-leading family and group therapy sessions with seasoned therapists made me appreciate my childhood even more.

In 1985, I was introduced to the theory of Ivan Boszmormenyi - Nagy in my MSN program. I was assigned to study his classic text for a Family Therapy course:

I was drawn to Nagy's work. Ironically, in 1957, he was instrumental in research in schizophrenia and his contextual approach to family therapy at the very same E.P.P.I. I had studied, in Philadelphia, PA.

To say this theory is heavy duty is a major understatement. I still have to read each section several times for Nagy's key points to sink in. Yet, despite any initial apprehension, this classic text is one I reach for today, time and time again.

My childhood concept of loyalty was forever altered when I entered my chosen profession of nursing. I had no idea that to take care of people, I would encounter such sadness and heartache.

It was unimaginable to me that children could be physically and emotionally battered at the hands of their parents, or other trusted adult figures in their lives. It was even more confusing when these children would protect, defend, even lie for the perpetrator.

To have told the truth would have been the ultimate act of disloyalty to the family. In fact, these invisible loyalties were some of the strongest and most powerful allegiances I had ever observed.

My family related loyalty to love, trust and protectiveness. I learned in Nagy's theory how more dysfunctional families tied loyalty expectations to guilt, secrets and degrees of abuse.

Maintaining appearances of a functioning family unit at all costs is the ultimate show of loyalty. In such a secretive, guarded system, it is easy to see how therapists and legal personnel are regarded with the highest of suspicion and threat. Even teachers and health care workers can be viewed as the enemy, when trying to gather assessment information.

These invisible bonds of loyalty go way beyond the honor and trust I learned in my innocent childhood. They include a blind devotion laced with deep - seated feelings of guilt, responsibility and commitment to keep family secrets.

If I were not to put my arms out,

would I have not caught you

Loyalty to Justice and Social Dynamics

Looking back to 1999, I was 37 years of age and working in a position of great responsibility.

As the Chief Nurse of over 600 staff, each felt like a child under my parental watch.

Having been raised in a caring, trusting home with clear - cut boundaries, I ran my Nursing Department in much the same manner.

Taught to be hard on the issue and not the person, my goal was to treat everyone with kindness and respect.

As a nurse, my immediate loyalty was to my patients first and foremost. Physical or emtional cruelty of any kind would not be tolerated under any circumstance.

Competent, compassionate nursing care and treatment was a clear expectation, including no impairment while on duty from drugs or alcohol.

Nagy's theory of invisble loyalties expands from family relationships to issues of justice and social dynamics.

In the family clan, we learn a solidarity that positively or negatively influences the manner in which we treat our friends, even strangers.

Lessons learned, not learned, have a huge impact on our ability to contribute, or not, as good citizens in society.

Armed with all the theory in the world, I was defenseless at the hands of an immoral, impaired man, with a clear intention to harm me.

An innocent woman, only 55 years of age, lost her life at the hands of this man. Her only crime was sitting in my office having a casual conversation with me.

Above all, be true to yourself,

and if you cannot put your heart

into it, take yourself out of it.

Loyalty: Being True To You

After surviving the most horrific circumstances of my life, I realize:

I have been given the gift of life. I will never take that for granted.

I will not permit myself to assume the guilt of someone else's evil actions, no matter how sad I am at the outcome.

I will not allow myself to be defined by someone else's actions.

I have the power to guide the course of my own life.

If you were in my eyes for one day

you would see the beauty that full of happiness

I find in your eyes

and I ignore if it's magic or loyalty

If you were in my heart for one day

of what I feel

when you squeeze me tight on you

and chest to chest, we

Protagonist of your love

I don't know if it's magic or loyalty

If you were in my soul one day

you would know what I feel in me

over those instants together with you

and what I feel

Cinema Paradiso is one of my all- time favorite movies.

In 1988, I saw this cinematic masterpiece for the first time on the big screen.

In twenty - five years, I continue to learn lessons from this story, with themes of unconditional love, passion and loyalty.

I am both fascinated and enamored with the unlikely relationship between Alfredo, the grumpy projectionist, and Salvatore ( Toto), the film maker.

As the story unfolds, each believes their world has fallen apart, Alfredo, in the fire of Cinema Paradiso and Toto, in the loss of his love, Elena.

In the end, Alfredo has keen insight and inner vision.

Salvatore has realized his boyhood dream and remained true and loyal to himself.

The lyrics of this song speak of love. To be true and loyal to yourself and your principles is key.

This is self - love and necessary before you can reach out to others in the same manner.