Known also as the "Queen of fruits", mangosteen has been used for thousands of years in folk and traditional medicine.

Totally unrelated to the mango, Garcinia mangostana is a very slow growing, small to medium sized tree that grows from 20 to 80 feet high and mainly in the tropical regions as even the adult tree is not able to withstand temperatures below zero degrees C for long. These trees and the fruit too, is therefore, not known in North America.

The tree is believed to be native to the Sunda Islands and the Moluccas of Indonesia.

Mangosteen twigs are used as chewsticks for cleaning teeth, in Ghana.

The wood is used

The mangosteen tree matures in 6 to 10 years on an average. 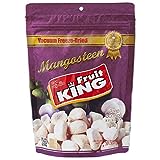 The mangosteen fruit starts off as an unripe almost white to pale green colored fruit. The outer rind or exocarp changes to dark green color as it matures in 2-3 months and also increases in size to 4-8 cms in diameter.

The fruit remains hard till the fruit has attained its final size and then the outer skin becomes softer and the color changes from dark green to red to dark purple which indicates it is ripe for picking.The rind hardens post harvest.

Inside are from 4 to 8 soft, pulpy, white segments almost resembling a garlic bulb, known botanically as arils. This is the edible part of the mangosteen fruit. The seeds are contained in the larger arils and can be eaten after roasting.

The arils are mildly sweet, taste somewhat like a lychee and are considered a delicacy.

The rind being quite thick and hard needs to be shallowly cut all around a little above the center of the fruit and the cut top segment lifted up to reveal the soft segments inside.

An alternate way to open a mangosteen fruit can be seen at http://www.eataku.com/post/60610648479/how-to-open-a-mangosteen

The mangosteen fruit is low in calories, without any saturated fat or cholesterol.

It is rich in dietary fiber and provides 12% of the daily requirement per 100 grams.

The active principles in Mangosteen are the phytonutrients called xanthones. It has been found that mangosteen contains 43 xanthones out of the 200 identified.

The xanthones are found mainly in the purple rind of the fruit and are responsible for most of the health benefits that mangosteen offers.

Also, mangosteen contains the highest number of xanthones found in any natural substance. Alpha mangostin is found in maximum concentration.

Mangosteen contains compounds that aid in relieving many diseases and health conditions in our body. In folk and traditional medicine the rind, leaves, bark and fruit have been used since ancient times.

Though there are supporters and detractors of mangosteen with regards to its almost magical benefits, with the majority of them saying that the benefits are all hype without any scientific backing, all the health benefits mentioned here have scientific studies to back them up, as can be seen in the reference links.

Some of these health benefits of mangosteen are : 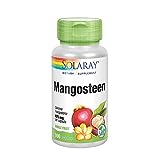 Other Information On Mangosteen 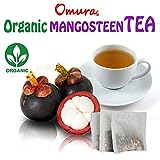 Mangosteen Tea And Its Benefits

Mangosteen tea is quite popular due to its high xanthones' content. Since the xanthones are in the rind, the rinds are dried for making tea. The dried rind is boiled for a 3-5 minutes in water to make the tea.

Mangosteen tea is beneficial as an anti inflammatory drink to reduce inflammation as in fever, chills, headache, arthritis, fibromyalgia etc.