The Master Cleanse - Myth or Miracle?

If you've ever been desperate to lose weight, chances are you've heard of (or tried) the Master Cleanse Diet. First conceived of by Stanley Burroughs in the mid-twentieth century, this regime for detoxification regained popularity in the early 2000s, with a book by Peter Glickman touting the health benefits and especially the alleged weight loss results of the Master Cleanse.

But does Master Cleanse work, or is it just another diet scam, part of the mass deception that comes standard with the multi-billion dollar industry?

What Does Master Cleanse Do?

The basic principle behind the Master Cleanse is a detoxification fast, drinking only a mixture of water, lemon juice, maple syrup, and cayenne pepper in specific proportions (recipe below). It's this concoction that gave rise to the popular aliases "Lemonade Diet," "Maple Syrup Diet," and "Lemon Cleanse."

The premise is that drinking this special beverage aids in ridding the body of toxins from pesticides, hormones, and other chemicals in our everyday environment, as well as clearing out built-up material in the colon. Drinking senna tea (a laxative) and performing daily salt-water flushes is also recommended.

The testimonials of die-hard Master Cleanse fans report positive results such as weight loss, increased energy, improved acne, and sharper vision. However, there is no peer-reviewed scientific evidence indicating that the Master Cleanse actually provides health benefits from detoxification.

How To Do Master Cleanse

Master cleanse kits regularly sell for $50 each, sometimes over $100! For something that's supposedly so simple, that seems like a lot to shell out. The basic master cleanse lemonade recipe is as follows:

Sound disgusting? It is. Now imagine drinking that entire recipe over the course of the day, with no other food, for 14 days. Feel ill yet? Lemon juice and cayenne pepper both irritate the digestive system, while maple syrup provides just enough calories so that you don't keel over. Add to that a daily dose of laxative tea and/or a salt water flush (1 tsp non-iodized sea salt in 4 cups of water), and you better be near the bathroom.

The Dangers of the Master Cleanse

Not only is this program hard to follow, and the drink hard to swallow, it is potentially dangerous as well. You are inhibiting your immune system, as well as your ability to process food.

Purposefully irritating your gastro-intestinal tract is never a good idea, but salt water flushing actually removes healthy, helpful bacteria from the lining of your colon. By engaging in this practice for an extended period of time, you are effectively wiping out one of your first lines of defense against infection and sickness.

In addition, prolonged fasting has many negative side effects, including all the symptoms that go along with malnutrition: insomnia, cravings, nausea, depressed mood, hair loss... the list goes on. Proponants of the Master Cleanse will tell you that these are signs that the toxins in your body are being eliminated, but you would experience the same symptoms on a water-only fast.

Once you start eating again, you may suffer bloating, constipation, and/or acid reflux, as your body is unused to processing food and has to re-learn how to digest it.

Like modern-day diet scammer Kevin Trudeau, creator of the Master Cleanse Stanley Burroughs was plagued by accusations and lawsuits for his entire career. One patient, whom he convinced to ignore his doctor's advice for 30 days, actually died under his care. Burroughs was convicted of second-degree felony murder and felony practicing medicine without a license. 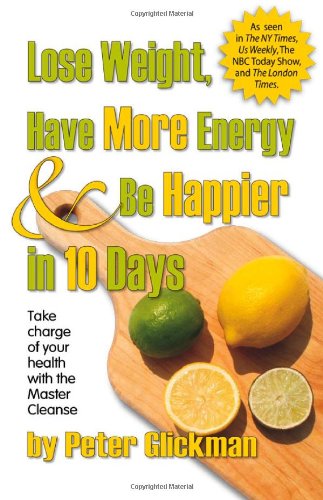 Lose Weight, Have More Energy & Be Happier in 10 Days: Take charge of your health with the Master Cleanse
The book by Peter Glickman that popularized the Master Cleanse Diet as a method of weight loss in 2005.
Buy Now

So Why The Hype?

After all of this, one might wonder why an outdated, groundless formula for a revolting spicy lemonade would enjoy such success in this day and age.

Part of the rejuvenation of this concept comes from the hubbub around colon cleansing to rid the body of so-called "mucoid plaque," which is actually a term coined by a naturopath/entrepreneur who sells, what else, colon cleanse products.

Affiliate marketing on the internet has also served to propogate many a diet myth, and this is no exception. The large number of "testimonials" for Master Cleanse speaks more to the high pay out for the person singing its praises than to its actual efficacy.

The "Lemonade Diet" got a boost from celebrity Beyonce Knowles, who used it to fit into her costumes for the film Dreamgirls. However, Beyonce herself has said she does not condone it as a diet plan, as quoted in a 2006 interview: "I wouldn't recommend it ... there are other ways to lose weight."

The fact also remains, people do lose weight on the Master Cleanse Diet. The only calories you take in on this plan are from the maple syrup in the lemonade drink, which constitutes a starvation diet. Anyone on this sort of fasting regime for more than a few days is bound to lose weight--but not permanently. Doctors agree, weight lost on this sort of crash diet will return, often with the company of a few extra pounds.