Melatonin: The Natural Wonder Drug Everyone Should Know About

Melatonin is a natural hormone produced by the pineal [pie-NEEL] gland in the brain. The pineal gland resembles the shape of a pinecone, for which it was named. It's about the size of a kernel of corn, and sits exactly in the middle of the brain.

The tiny pineal gland is the first to be formed in the body, and is responsible for producing melatonin. Melatonin is needed for restorative sleep and dreams, and has a hand in setting the body's circadian rhythm ("internal clock.")

Have you heard of melatonin before?

As we age, our natural melatonin production decreases, and some people don't produce enough to begin with. This article will discuss some of the benefits of having the correct amount of melatonin each night via supplements:

The pineal gland produces the hormone melatonin every night. In the daylight the next morning, the melatonin is dissolved by its reaction with the light.

You are left feeling perfectly rested and restored, with no grogginess or other "druggy" effects. Since you are using your body's natural sleep molecule, it works with the body naturally and efficiently.

Melatonin starts to work relatively quickly--within half an hour of taking it. And you'll know when it's working because you will become very sleepy and sleep will become irresistible.

My way of describing what melatonin sleep is like is this. Imagine going on a dusty hike in sweltering hot weather carrying a 45-pound frame pack for about 20 miles up huge hills and down huge valleys all day long. Imagine how tired and ready for sleep you'll be after pitching tent and building a fire.

Jet lag is one of the worst parts of long-distance travel. Anyone who has experienced it has probably not forgotten what a drag it was.

Basically you are going from one time zone to something completely different. Let's say you left in the daytime and got there 24 hours later, so it should be daytime, right?

But you've flown halfway around the world and now it's deep night.

Your body's rhythm is set to think it's day, and that can really make you feel weird. Everything gets messed up before it can correct ("recalibrate") itself. It can take a week or two under normal circumstances.

That's where melatonin comes in. I've flown 8,000 miles over the Atlantic Ocean many, many times, and one thing I can tell you for sure is that melatonin was the answer to my prayers--once I found out about it.

In addition to jet lag, melatonin works equally well for people who are doing shift work. Melatonin will help you to sleep restfully, will restore your energy, and will regulate your circadian rhythm.

Shift work, as anyone knows who has worked shifts, begins to take an enormous toll on your body. When it comes down to it, our bodies aren't meant to change their cycles, but to rise with the sun and go to sleep when the sun goes down.

Disrupting this natural rhythm can cause illness, sleeplessness, and a feeling as if you're a zombie. Melatonin successfully relieves these symptoms and helps get your body the rest it needs.

As anyone who has been stressed probably knows, stress hormones like cortisol can rapidly start to affect your health and immune system.

I know that in college/university when things got really stressful I'd be okay for a while, but if it went on and on, I'd almost always catch a cold or whatever was going around at the time.

What does this have to do with melatonin? Well, melatonin actually buffers the effects of stress, and plays a vital role in the immune system.

In fact, in various studies conducted by Georges Maestroni throughout the 1980s (when melatonin research was still somewhat new), he decided to remove the pineal glands of various animals and see what would happen.

So, have I noticed a change since taking melatonin every night for the past year? Absolutely; in both myself and my dad. Sick less often (and under the same amount of stress), and the length of any illness is definitely diminished.

Not only that, but it makes you feel better overall, and you have more energy. It's a very restoring molecule.

Any atom or molecule with an unpaired electron is unstable, and will destroy other molecules in order to become stable (gain its electron).

This could entail the destruction of vital enzymes and the genetic code (DNA) itself.

I probably don't need to mention that when rogue molecules are going around destroying perfectly good and often critical molecules, bad things can happen!

According to Dr. Reiter and other members of his team at the University of Texas Health Sciences Center, after conducting experiments on melatonin as an antioxidant, they were amazed at what they found.

After years of research they concluded that melatonin is the most potent and versatile antioxidant known to exist. This is excellent news for the future of medicine, and for you!

There was a 10-20% reduction in cholesterol across the board

Yes, folks, you're in luck. Melatonin actually decreases LDL ("bad") cholesterol. It reduces the oxidation of LDL cholesterol, which then prevents it from forming plaques on artery walls. A study done in 1995 and published in the Lancet found that "people with healthy hearts were producing five times as much melatonin as those with diseased hearts" (RJ Reiter.)

Melatonin also decreases blood pressure. In a study using melatonin-based birth control pills, out of the 1,400 women tested, "there was a 10-20% reduction in cholesterol across the board" (James W. Anderson, MD.)

At night when we're sleeping (and when the majority of our melatonin is produced), our platelets become "less sticky." In a study where blood platelets were suspended in a melatonin solution, "the hormone reduced their tendency to clump by as much as 85 percent" (RJ Reiter.)

As early as the late 1800s and early 1900s, a number of medical doctors were already giving ground-up pineal extracts to cancer patients

Could the increase in cancers as we age correlate with our decrease in melatonin production?

Many studies over the last century had found there was "some" ingredient in the pineal gland that appeared to prevent and even treat / cure cancer.

They didn't realize until the 1960s that the substance is melatonin, and they are finding more and more information about its positive properties even today.

In addition to these types of cancers, many other types have been tested, and all came up with similar results: Melatonin is a great tool in cancer treatment and prevention.

In 1985 Georges Maestroni and two colleagues began a study involving melatonin and over 750 mice. The mice were split into two groups, given the same exact housing and food; the only difference was that one set received trace amounts of melatonin in their drinking water.

After all the mice had died (this was after all a study on aging), scientists made an amazing discovery: "The mice that had been given the melatonin nightcaps had lived an average of 931 days--a 20 percent increase in lifespan" (RJ Reiter.)

Ways in which melatonin may increase longevity:

[*] In conjunction with other methods.

Were you aware of all the benefits of taking Melatonin?

9. Side Effects and Dosage

"There have been no reported cases of acute toxicity from melatonin. The doses that have been ingested have caused blood levels a hundred thousand times higher than naturally occurs" (Robert Sack, MD.)

Melatonin is nontoxic. The only detrimental reaction may be increased tiredness, but if you take it when you're supposed to (30 minutes before sleep), there should be no problem. Other than that, scientists have found it completely safe and natural. After all, our own body makes and uses it extensively.

Melatonin should be taken at night 30 minutes before wanting to actually turn the light out and sleep. Light destroys melatonin, so after taking it, be sure to stay in the dark and only use muted nightlights in the bathroom, etc. If you do feel groggy in the morning, look at a bright light or the sun for a few minutes and it will vaporize the melatonin.

Synthetic melatonin supplements come in a range of potencies. I have found that 3 mg is just about right for me.

Look for: third-party certified melatonin, 3 mg (adjust dosage up or down from this base point), time-release (acts more like our natural hormone), reputable brand ("Schiff," "Source Naturals," etc.) 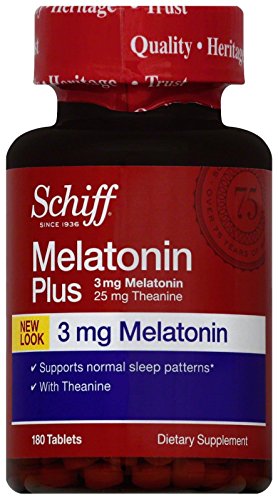