Is Mistletoe an Herbal Remedy for Cancer?

Surprisingly, that question is not easily answered; at least there is no answer with a simple yes or no.  However, there is a great deal of promise being shown in this herbal remedy although there has been some controversy surrounding this herbal remedy that has been gaining wide acceptance especially in Europe, although it is beginning to be studied internationally.

Did you know that mistletoe is an herb?  I always thought of it as a plant perhaps growing on a bush or a tree but in fact, it is an herb.  In the preparation of this anti-cancerous extract, usually the whole of the plant is used (dried).  It can be prepared as well as a tea or an extract (tincture) form, but there is no measurable effect of the herb in these forms.  The promise seems to lie in the application of the extract.

The Facts on Mistletoe Extract

Viscum album is the technical name for mistletoe otherwise know as the herb that fights cancer. There are many different varieties grown around the world, but the prevailing type of mistletoe being used in the fight against cancer is the European variety.

The variety that we North Americans are used to seeing at Christmas is phoradendron flavescens.

Some facts about this mysterious herb:

There are several brands of this mistletoe extract on the market today. They are (listed in popularity)

A company in Europe by the name of Weleda AG manufactures this extract in the form of the most popular variety – Iscador. This herbal concoction actually consists of the fermented extract of mistletoe which in turn is mixed with copper, silver or mercury in small doses.

This is a drug that is not used in the US. It is ‘allowed’ if someone wants to obtain it for compassionate use which means that the patient is most likely terminal. However, there are some alternative medicine clinics around the country and in Switzerland, Tel-Aviv, Denmark and Germany for example who are doing trials with this extract. Notably, people in the US can obtain the extract by contacting www.usa.weleda.com.

Some tumors have mistletoe extract directly injected into them and there has been promising evidence of tumor shrinkage or the technical term ‘necrosis’ where the cells begin to die off. The most common tumors that are directly injected are tumors of the cervix, the liver, or esophagus. Some practitioners recommend an oral form for brain tumors or spinal cord tumors.

It should be noted, however, that the treatment course is not a short one and can last for months to years. The treatment course is accomplished usually by gradually increasing the dose depending on the patient’s overall stability and health at the time. Most people end up doing self-injection (much like insulin) every second or third day and generally for tumors that do not respond best to direct injection into the tumor itself, the injection is recommended to be done as near to the site of tumor as possible to increase the benefit.

What are the Benefits?

So far, research has shown that the following pros are consistently being achieved:

This is the #1 treatment being used in Europe as an alternative medicine treatment for cancer and is being used by two-thirds of all oncology patients.

Is This a Cure-All or Is There a Down Side?

It should be noted that it is highly recommended that mistletoe treatment be used as an adjunct to standard surgical therapy, chemotherapy and radiation therapy for optimum results.  However, in animal studies so far, they are finding that it is stopping the spread of metastatic cancer that can occur with surgery or natural metastatic spread of disease (especially in genital, bladder, intestine, stomach or skin cancers).  It has been shown to retard the metastatic spread in some cases.

It has proven less successful in treating inoperable breast or lung cancer or esophageal cancer that is not resectable.  However, it is showing promise in getting the tumors to stop growing and perhaps recede.

The hypothesis is that a treatment that does this will cause the tumor to go into remission, become a less malignant entity, then evolve into an inflammatory mass and finally change to normal tissue.

Are There Side Effects?

Now all those probably sound exactly like the disclaimers that run at the end of any drug commercial in the United States! It should be pointed out here, however, that for most folks battling cancer, if this is their only hope, sometimes it is worth the risk of potential complications or side effects.

This is a medical treatment and should be treated as such of course – and should only be administered under the careful scrutiny of a health care provider. The American Cancer Society’s biggest disqualification of ‘alternative medical therapies’ is that patients often rush to embrace these while not agreeing to standard medical treatments for cancer and the recommendation is that this herbal remedy be used as an adjunct to not in place of standard medical recommendations for any specific cancer.

Suzanne Somers is one case in point, and you can read about her thoughts on using, among other things, mistletoe extract in the treatment of her own cancer.

I don't think I've ever met a person who was not in some way, shape or form touched by cancer.  It is a devastating disease and for those who survive it, it is truly a miracle.  I personally think that cancer is a huge money-maker here in the United States and with increasing longevity and wellness awareness, people are living longer and with fewer ailments.  I do believe that in good faith, our country should probably get on board as well with trials of mistletoe extract and join in the research.

Again, while it may not be a cure-all, all the evidence is pointing to the fact that properly administered, this herbal remedy to fight cancers of differing types is at least having many positive effects for cancer patients.

Even if it is 'only' in the form of palliation for cancer patients, that itself justifies more research.  Typically, the side effects of cancer kill the patient long before the cancer ever does because the patient’s body is so overwhelmed by the stress of the cancer and/or the treatments used to fight it. Reducing cancer cachexia and keeping a patient more comfortable as well as allowing him or her to have a better quality of life certainly seems to be worth trying if the patient shows no adverse response or meets the criteria for usage.

Knockout: Interviews with Doctors Who Are Curing Cancer--And How to Prevent Getting It in the First Place
Buy Now 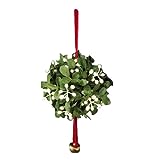