Most and Least Effective Oils for Oil Pulling

Before we get to the most and least effective oils for oil pulling, let us determine what oil pulling is, where it came from, how it is used, what the benefits are, and how it gained and continues to gain popularity.

What is Oil Pulling?

Some call oil pulling the latest health fad. Simply put, it is swirling oil around your mouth for a few minutes, spitting it out, and then washing or brushing as usual. We have to thank the traditionally-Indian, thousands of years old Ayurvedic system of medicine for this therapy. It purports to improve oral health as well as the health of other parts of the human body by pulling out harmful toxins (bacteria, viruses, fungi, free radicals, etc). There are studies to substantiate the claim. The Mother Earth Living magazine article, “What is Oil Pulling?” reported that the process was introduced to America in the early 1990s by Ukrainian M.D., Dr. F. Karach. From there it quickly made its way into holistic medicine, and now it seems to be moving into western culture at-large.

For optimal benefits, most proponents of oil pulling suggest the following method of use: Before you brush your teeth or eat breakfast in the morning, measure one tablespoon of oil, pour it into your mouth, swish and swirl it around, pull or suck it through your teeth, gums, and tongue for at least 15 to 20 minutes. By this time, ingredients in the oil should have extracted the toxins and created a noticeably thicker, white liquid, which you then spit out (it is advised not to swallow) in the trash for environmental reasons. You then give your mouth a thorough rinsing with regular water, or brush your teeth as usual. When finished, drink two glasses of water. Continue the process for about one month, four to five times a week, and gauge results. If you choose to try it again, do so after two months.

A CNN online report “Oil Pulling Does it Work?” by Sara Cheshire, mentioned other methods recommended by Dr. Amala Guha, assistant professor of Immunology and Medicine at the University of Connecticut Health Center and founder of The International Society for Ayurveda. Dr. Guha believes that effective oil pulling is practiced in one of two ways. She cites two Indian Ayurvedic texts that were in existence since 700 B.C. One technique is called Kavala. Fill your mouth with oil, wait two minutes then swish or pull it around, and spit. Do this at least three times. The second technique is called Gandusa. Keep the oil in your mouth for at least five minutes without swishing or pulling, then spit and repeat.

All sources agree that a number of different oils can be used for oil pulling: sesame, sunflower, olive, coconut, walnut, grape seed, and black cumin seed, to name a few. But some oils are more effective than others, especially in treating specific ailments. For the best overall results, it is recommended you pull with the purest quality oils, which are oils that are organic or all-natural, extra virgin, and cold-pressed.

Many of the practitioners and experts of oil pulling put this oil at the top of their list. Maybe because it has lots of antibacterial, antiviral, antifungal, anti-inflammatory, and antioxidant properties. Research conducted in 2013 showed that sesame oil greatly decreases gingivitis, the overall mouth and saliva bacteria responsible for plaque, and Streptococcus mutans, which causes tooth decay and gum disease. A prior Iowan (U.SA.) study showed that students who simply rinsed their mouths with sesame oil had an 85% reduction in the gingivitis bacteria.

Coconut oil is also highly touted for oil pulling primarily because of the antimicrobial (antibacterial, antifungal, and antiviral) properties of lauric acid, one of its constituents. There are claims that it works even better than sesame oil in the oral hygiene department. It alleviates gingivitis, plaque, affected and inflamed gums, toothaches, tooth sensitivity, and give you whiter teeth and fresher breath. It is also an intense detoxifier; it relieves allergies, migraines, respiratory issues such as asthma; helps in the treatment of diabetes and arthritis; clears the skin of diseases such as keratosis pilaris and makes it glow.

Note coconut oil tends to solidify at room temperature, so you might have to melt it. A great characteristic is that coconut oil is resistant to spoilage.

Little research has been done on oil pulling with olive oil, but it is still is considered one of the best by experts. It too has large quantities of fatty acids, which is especially good for the skin. Pulling with olive oil thoroughly cleanses the entire mouth and makes it healthy by eliminating bacteria that cause oral diseases, eradicating halitosis, whitening teeth, and preventing dryness of the mouth and lips. It also eliminates allergies, toxins and free radicals from the circulatory system and organs, unwanted and harmful bacteria from the digestive system, and bodily aches and pains. It improves vision; increases energy levels; and of course, cleanses and moisturizes the skin.

Taste and viscosity may be important considerations in determining which oil to use for oil pulling. Some people believe sesame oil is lighter and better tasting. For others, it does not matter that coconut oil, for instance, solidifies at room temperature, but that it works best for them. 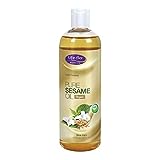 Certain oils are considered very poor quality for use in oil pulling therapy. The list includes corn oil because of its richness in polysaturated fatty acids, which may cause breast and prostate cancers among other diseases; canola oil, which is genetically-engineered from the Canadian rapeseed plant and is full of pesticides; cottonseed oil, which is also genetically-engineered, high in saturated fats and natural toxins, and may cause heart disease; and soybean or soy oil, which contain estrogen-like ingredients that could change the body’s hormonal activity, and it may also cause blood clotting.

If you have tried Oil Pulling, which oil have you found to be most effective?

Side Effects of Oil Pulling

Even the good oils and those considered most effective in oil pulling can cause allergic reactions. Also, it has been reported that many users experience what is termed a “healing crisis” where symptoms get worse before they get better. Improper technique could have negative results too. Pregnant and nursing women are advised to consult a healthcare professional before trying oil pulling. Lastly, the American Dental Association believes that at the moment evidence supporting oil pulling is insufficient to eliminate brushing and flossing altogether.

This article is simply to provide information and does not suggest you use oil pulling as treatment for oral cleanliness, to treat any ailment in the human body, or for overall health. Always consult your healthcare professional first.