Moving On After Tragedy

Denise has experienced the death of loved ones in her immediate and extended family, and that has lead her to seek information about grief.

It's okay to cry when things go wrong and someone has silenced the earthly song of friends or relatives, loved ones dear, and everything that you hold so near. It's okay to feel the sadness deep and seek some solace, emotional relief, to be with others who seem to know your feelings and help your grief let go.*

The past is gone. There is no future.

Safety and security are no longer.

The world is a different place.

Numbness is the only feeling.

Vulnerability is ever present.

Tragedy throws us for a loop. Things that we thought would never happen in our world suddenly come into full view. Bombs go off at the end of races. Deranged souls bring weapons into schools and take the lives of the innocent. Tidal waves heave beyond their banks, destroying everything in their wake. People get robbed, beaten and maimed.

The shock of tragedy leaves us feeling stunned and vulnerable. We may be filled with fear for our own safety, especially when loved ones close to us are either gone or unavailable due to injury. There may be anger and frustration from unmet needs and unfulfilled expectations. Even when people step in to assist, we may push them away, feeling that we are not worthy of the help they have offered.

As human beings, we are deeply affected when one of our own is marred by a tragic event. We step forward, wanting to relieve suffering. We open our minds, hearts, and homes, realizing that at any moment, we may be the ones needing assistance. We realize how fragile our own lives are and hope that others would do the same for us.

Healing from tragedy requires acceptance of the current situation. Unfortunately, this is not easy. It means leaving behind the familiar and going forward into the unknown. In his book Transitions: Making Sense of Life's Changes, William Bridges speaks of this process as a transition; or leaving one state, processing the time in-between, and then entering a new state of being.

Tragedy often initiates transition. Things no longer work the way they used to and we need to do something different. The time in between how things were and the future unknown is full of discovery, re-definition, and self-searching. A person who tries to hurry the process will end up with unfinished business. It is necessary to close the book behind us, allow ourselves to walk away from it, and find a new life that is more suited to our current circumstances, needs, and desires.

It's okay to fly on the wings of a prayer and pretend that the tragedy just isn’t there, to laugh and to sing over stories and jokes, and be just like other ordinary folks. It's okay to dream of a time and a place where there is a wonderful human race and bad things don't happen and people are kind, with tragedy the farthest thing from your mind.

First and foremost, we must re-define who we are. Our core self-concept is built around the statement: "I am." How we complete the sentence determines where our self-concept comes from. Many people define themselves in more than one way. The following are examples:

When tragedy strikes and the self-definition is erased, it is necessary to find a new one before moving on. The danger with those listed above is that they can be erased in a moment. Jobs can be lost, people can be maimed, banks can collapse, families can fall apart, feelings are unreliable, looks can be marred, and what other's think depends upon who we are with.

There is one definition that can never be erased or changed, the fact that we are all human beings, and as such, are children of God. The phrase "I am a Child of God," says that no matter what has happened, God is there. His love is constant. Turning to God during tragedy is the best way to find oneself again. Turning away from God leads to bitterness and ever present anger.

It's okay to buy a card or a gift, for it will surely some spirit uplift, it calms the heart and clears the head when you see others know of your terrible dread. It gives you hope and a feeling of peace when empathy and love around you increase. It's okay, too, when you do receive for it lets you know that others believe.

Talk about the tragedy

Tragedy often leaves us speechless. We are uncomfortable, or feel deeply enough that we fear something inappropriate will come out of our mouths. We want to demonstrate empathy, love, and compassion, but we just don't know how.

First and foremost, we need to realize that the other person is just as uncomfortable as we are. They may not know how to express their own feelings either. Silence is okay, especially if accompanied by the touch of a hand, tears, or a hug. Mutual loss can be felt deeply through a person's presence alone.

Rather than asking how the person is doing, try "It's good to see you."

Rather than stating something that is obvious, try a more subtle approach, "I feel for you."

Rather than giving advice, let them talk, "Tell me what happened."

Rather than asking them what they need, look for something you can do for them personally.

Feelings are a common denominator, no matter what circumstances are present. People who experience tragedy may be sad, angry, or even joyous, depending upon the things that happened. We can usually tell how a person feels by reading the look on their face. A person who is angry may be complaining, blaming, or finding fault with authority figures. They need to have their feelings validated before they can move on to other feelings.

People who are feeling sadness will want to talk about memories, both of the immediate and distant past. Once they are able to process through the many memories, they can re-structure their future viewpoint to a positive one and move on. Those who are joyous after a tragedy may be in denial, and unable to process their feelings, or they have already processed and are working on a new future viewpoint. Either way, allow them to feel it and don't try to talk them out of it. There will be down days later.

It's okay to sigh and relax for a time when energy is zapped by such feelings sublime, when emotions and pain have taken their toll with those that are missing from the roster or roll. It's okay to turn back the time machine then and remember the time before tragedy began, to look at your life as if in a play, and wish that things were still that way. 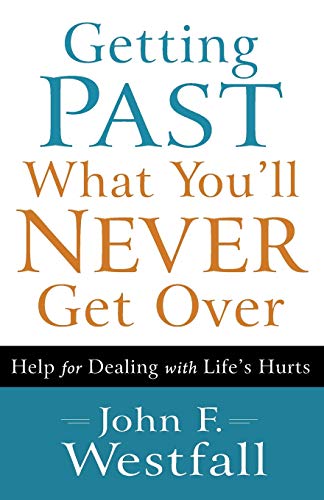 Getting Past What You'll Never Get Over: Help For Dealing With Life's Hurts
Buy Now

Dealing with the memories

John F. Westfall in his book, Getting Past What You'll Never Get Over speaks of the emotional calluses that develop on our souls following a tragedy. Just like the calluses that develop on our hands when we are doing difficult manual labor, we develop calluses when the emotional pain we experience is so difficult that we cannot bear it. Later, after our souls have had time to build up a new layer of emotional strength, these calluses disappear and we are in a position to feel once again.

Memories of tragedy often have strong emotions associated with them. At any given moment, a memory can be triggered inadvertently, leaving us with feelings of fear, apprehension, or anger. When these types of memories are triggered, they usually become exaggerated in their effect. Over time, we have seen the unpleasant event so many times that our point of view becomes distorted, and the negative aspects are overpowering.

Because our feelings and circumstances change over time, as well as our perspective on life and the people in our lives, we have the ability to re-frame a memory in such a way as to decrease its negative effect. Re-framing is accomplished by removing the emotion temporarily from the memory, and taking on the mindset of someone who may not have been involved with the incident.

As we do so, we come to the memory from a different angle, and see things we did not see or understand previously. Experiencing the event from a different perspective often softens the feelings associated with it as our understanding grows. Allowing ourselves to re-frame unpleasant memories gives them less power over our subconscious mind, and give us a different set of memories in our retrieval system. Then when these events replay in our minds, they have lost their potential controlling influence.

It's okay to cry the tears of joy with every man, woman, girl and boy, that come of peace and hope and love, the comfort and solace that come from above when you have established a common bond that gives you courage and faith beyond that which normally is the fair before the tragedy brought it to bear.

Have you personally experienced tragedy in your life?

Tragedy changes our lives in such a way that it has a profound effect on the development and functioning of our brains.

If any of these circumstances are happening to us or a loved one, it is best to seek professional assistance. Start by seeing a general practitioner. Have a complete physical to rule out any physical causes of the symptoms, then obtain a referral for the appropriate professional needed.

Speech/language pathologists are trained to help young children who have speech issues related to traumatic events. Psychologists have tools that can help those who struggle with unresolved grief, behavioral issues resulting from trauma, and those who have identity crises. Drug and alcohol involvement may require addiction treatment.

Social workers and counselors work in a variety of positions assisting people who experienced tragedy. They use activities, talk therapy, and group sessions to assist people in dealing with tragic events that have left deep scars.

It is possible to move on after tragedy. As we start the healing process by regaining our center of identity, talk about the tragedy, and re-frame our memories, we can put the tragedy behind us. Remember, everyone experiences tragedy at some time in their lives.

*Poem "It's Okay to Cry" by Denise W. Anderson.