Obsessive Compulsive Disorder (OCD) and Obsessive Compulsive Personality Disorder (OCPD) are two separate disorders defined in the Diagnostic and Statistical Manual of Mental Health Disorders (DSM-5; American Psychiatric Association [APA], 2013). Many people have heard of OCD but not so many have heard of OCDPD. In fact, I have been studying psychology for several years, and just recently learned about OCPD. While they are similar, there are significant differences and they are classified differently in the DSM-5.

OCD- Are you compelled to engage in certain behaviors?

First, I will provide an overview OCD. OCD is one of the various disorders which previously fell under the heading of anxiety disorders in the DSM-IV. With the recent revision (DSM-5), it is no longer Included in this group. There has been an added chapter called Obsessive-Compulsive and Related Disorders. Other conditions grouped in this chapter are body dysmorphic disorder, hoarding disorder, tricotillomania (hair pulling disorder), excoriation (skin picking disorder), and substance or medical condition induced OCD. There have been changes to specifiers of diagnosis, including nail-bitting, biting the lips or cheeks, and non-delusional obsessive jealousy (DSM-5, APA, 2013).

To obsess about something means to be overcome with excessive thoughts about something or someone in particular and comes from the Latin word obsidere (Allen, Liebman, Park & Wimmer, 2001). We will often hear people “I am obsessed with…” to indicate that they like something very much, but obsess in this sense is different; it is uncontrollable and not pleasurable to the individual. According to Allen et al. (2006), compulsion is derived from the Latin term compulsus which means “to compel”. In this sense, then, the individual is overcome with excessive thoughts to engage in certain rituals or behaviors that do not serve a practical function in his/her life.

The individual engages in repeated, unrealistic acts, for example hand washing, checking the stove, everything in its place, checking that doors are locked, or being infected by germs, which they cannot resist doing. In addition, these individuals know that their fears and/or behaviors are unreasonable, however they are compelled to do them anyway. Often, these behaviors are done to ease anxiety or tension related to trying to control the urges yet it does the opposite. Furthermore, individuals with OCD typically display co-occurring depressive disorders and other anxiety disorders. To be diagnosed with ODC, the behaviors must cause the person distress, they must engage in the behaviors more than an hour daily, and it must interfere with daily life activities such as work or school and interpersonal relationships.

According to the National Institute for Mental Health fact sheet, statistics from 2005 indicate that an estimated 2.2 million adults in the United States suffer from this brain disorder which often begins in childhood. It is believed that it occurs equally in men and women, however boys show more symptoms of OCD than girls during childhood. In addition, twin studies reveal that more identical twins may be afflicted than fraternal twins.This disorder typically becomes more apparent in adolescence or early adulthood. Some people cycle form having few symptoms to having many symptoms which are usually brought on by stressful life situations. Oftentimes, individuals can fall into a pattern of behaviors which isolates them from other people and leads to persistent job instability if they do not seek professional assistance.

According to the American Association of Marriage and Family therapy website, there are a few treatment options available. A very common and effective therapy for ODC is cognitive behavioral therapy. CBT is a form of therapy which includes exposure/response interventions for the behavioral aspect of therapy as a way of reducing the negative responses of anxiety/guilt the individuals experience due to the obsessive thoughts/behaviors. During periods of exposure to fear stimuli, the individual is prevented from engaging in the response s/he would normally conduct in the situation. For instance, when the individual feels the need to check to be sure the stove is turned off or all the doors are locked, s/he is prevented from engaging in this behavior. The cognitive part of the therapy involves the counselor assisting the individual with identifying the impaired thoughts which trigger the behaviors and then provide strategies to defy the faulty thoughts causing the anxiety and distress. Including loved ones in therapy by providing psycho-education about OCD can also be helpful. In this way, the people closest to the individual can help develop strategies to overcome OCD.

In addition, medications known as serotonin reuptake inhibitors (SRI’S) such as Paxil, Lexapro, or Celexa can help ease the anxiety causing the person to engage in his/her obsessive behaviors. The International OCD Foundation indicates other treatment options including: intensive treatment programs, brain surgery, deep brain stimulation, gamma knife, as well as additional types of medication. Moreover, working with a highly trained therapist is of utmost importance. The IOCDF also discussed a specific OCD disorder experienced by children as a reaction to an infection known as Pediatric Autoimmune Neuropsychiatric Disorders Associated with Streptococcal infections (PANDAS). There are a number of resources available to overcome OCD.

OCPD- Are you a perfectionist?

There has not been significant changes from the DSM-IV-TR version and the newly released DSM-5 in the way personality disorders are diagnosed. Persons with OCPD tend to be overly dependent on lists, organization, rules, details, or schedules so much so that they lose sight of the purpose of the activity. Frequently, they will not participate in leisure activities and are consumed by work (e.g. workaholic). In addition, they are so concerned with something being “perfect” that often a project does not get completed because it never reaches the standard of perfection s/he requires. I have found myself with this problem to the point in which it has interfered with my academics because rather than turn in a paper that was not “perfect”, I would not turn in a paper at all.

They often display an unwavering sense of right and wrong in terms of values, morals or ethical behavior (e.g. “It is NEVER ok to steal”). Some are described as stubborn or rigid. Furthermore, OCPD people have a very hard time delegating tasks to others unless they do it to their standards. I see this characteristic in myself as well, although I am learning (and trying very hard) not to do this. “If you want it done right, do it yourself” was my motto. Hoarding can sometimes become an issue with OCPD people because they have a difficult time getting rid of anything even if it is no longer useful regardless of sentimental value and then it becomes so overwhelming that they do not know where to start to get rid of things.

Culture can play a significant role in the development of OCPD. Societies which hold work and goal attainment to a very high standard may contribute to OCPD. Some suggest that there may be a genetic relationship as the disorder tends to run in families; however environment can play a key role in development. The characteristics of this disorder (perfection, rigidity, strictness) are pretty much ingrained in the individual by early adulthood. More men are diagnosed with OCPD than women are. While having some of these traits can be beneficial, there is a negative impact on interpersonal relationships. Conflicts with loved ones and co-workers often arise by the OCPD person’s need to be in control and his/her need for perfection.

Psychodynamic psychotherapy helps the person understand the thoughts and feelings they have. Cognitive behavioral therapy is another useful therapy. Combining either of these treatments with medication (SRI'S) has been shown to be effective. However, because this is a personality characteristic, it will take conscious effort to be fully engaged in the therapeutic process for change to occur. 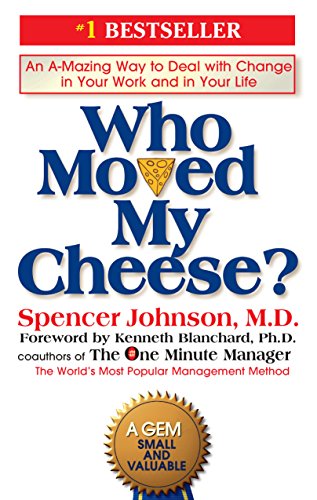 Who Moved My Cheese
Buy Now

Obsessive compulsive disorder and "perfectionsim", as well as many other mental health disorders (e.g ADHD; autism), get thrown around quite a bit by mainstream society. These are most frequently used out of context of the actual diagnosis. This tendency to self diagnosis is harmful because it minimizes the true impact of having one of these disorders. If you suspect that you may suffer from any mental illness, it is best to seek guidance from a trained professional. I hope you have fount this informative.

Do you think you know someone who has either of these disorders?