bio-medical graduate from NED University. Love to write about topics that I have experienced myself.

Babies are a blessing and angels in our world. Any kind of disease, disorder, or injury to them can be extremely frightening for their parents. Ohtahara Syndrome is a life-threatening disorder which affects infants at a very early age, which can be as early as 10 days of life or during the last trimester of pregnancy (when a baby is in the womb). All parents around the world should be aware of this syndrome. In such a syndrome the infant experiences epileptic seizures. EEG (Electroencephalography) is the best way to diagnose this syndrome. The worst thing about this syndrome is that it damages almost all of the cerebral hemisphere. Giving very less hope for infants to develop normally. No specific causes of Ohtahara Syndrome have been found yet. After a significant amount of research, I concluded that some infants die within the first two years and those who recover are left with severe physical disabilities in adult age. As a parent, you must not panic or stress out as this may not be the conclusion in all cases. Medical science is finding the best possible ways to prevent infants from such a disorder. Scientists say that Genetic Testing is giving hope for a healthy future

Ohtahara Syndrome is epilepsy syndrome also known as Early Infantile Epileptic Encephalopathy. It shows high-voltage spikes as compared to normal EEGs. This pattern is referred as burst suppression pattern. Boys and girls are equally affected in Ohtahara Syndrome. The epileptic seizures are so continuous in OS that they may risk a life. Epilepsy is a neurological disorder due to excessive discharge of neurons. Neurons are known as your brain cells. The neuronal connections in a brain help to develop many important systems of our body. Epileptic seizures cause uncontrolled body movements or behavioral changes.

In seizures, a child may be conscious or unconscious. However, infants cannot tell what they are going through at such a small age. If you ever find some irregular movements or if a baby is not responding the normal way you must immediately consult a doctor. Generally, we cannot predict any malfunctioning of the brain, this can only be seen through various brain scans, or tests and by observing symptoms.

You immediately need to go to a hospital in such a case. Such symptoms can be a threat that your baby has Ohtahara Syndrome. Parents are requested not to panic in such a condition. It may be possible that a baby has seizures for a few seconds and then recover normally. As in some case seizures last for seconds or are controlled by anti-seizure drugs. But in the case of Ohtahara Syndrome, seizures are not controlled that easily. Even anti-seizure drugs are not that effective.

In such a disorder infants may experience primarily tonic seizures, partial seizures and rarely, myoclonic seizures.

Myoclonic Seizures occur mostly during the infantile age. They may be generalized or partial. A child having myoclonic seizures may have single or many muscle-jerks. Either in one arm or leg, shoulder, or arms or maybe in the entire body. This may not be the case for all infants as sometimes myoclonic seizure doesn't cause any visible movement.

Tonic Seizures occurs in both parts of the brain as the muscle tension is greatly increased. In this seizure, the body, arms, and legs may suddenly stiff.

Partial Seizures occur in a specific part of the brain. They can cause both physical and emotional effects making you feel, see and hear things not present.

What are the causes of Ohtahara Syndrome?

Still, the causes are undetermined in many cases of Ohtahara Syndrome. Through genetic testing, doctors are finding many answers to such rare disorders and are hoping to prevent many infants from developing such mysterious illness.

How to diagnose Ohtahara Syndrome?

How can Ohtahara Syndrome be treated?

According to researchers, there is no such authentic treatment till yet. However, anti-seizure drugs are given regularly in such a condition. But as I have discussed earlier they are not found that effective. Secondly, steroid therapy can be helpful but according to my knowledge, it has various side effects as weight gain (rare), upset stomach, mood swings, hyperactivity etc. Nerve stimulator can work as a device therapy for infants and does not has any major side effect. The ketogenic diet, for infants, cannot be possible as during the 6 months they are only on mother feed or top feed. Correcting metabolic disorders can be really helpful as it can be treated through genetic testing.

How can Genomic Sequencing be helpful?

The human genome is more than just a sequence of nucleotides and bases. But sequencing the genome doesn't bring out the solution to all problems it has to be decoded. So decoding the genomic sequence is the main task. Decoding of the sequence interprets everything about the genome i.e the working of a genome, its contribution to developing various functions and which genes are pathogenic.

Thus decoding tells, how well genes contribute to the growth, development, and maintenance of an entire organism.

Now comes the answer to how genomic sequencing helps?

Our genome consists of several protein-coding genes. These genes are comprised of protein-coding segments called exons and introns. Collection of exons in our genome is called exome. Most of the known disease-causing genes lie within the exome. So exome sequencing is mostly done to find the sequence variations. According to Human Genetic Research Centers, the main objective is to identify sequence variations contributing to the development of such rare diseases. In some cases, many variants are shown with false relation with diseases. Therefore there is a high probability of false-positive reports of pathogenicity in pre-existing data. After the correct identification through various tools, the information is used for a clinical purpose.

According to TIMES magazine, Genomics Institute at Rady is designed to help infants younger than 4 months suffering from some rare illness by running a genetic test via blood. The DNA sequencing tends to find clues for such undiagnosed symptoms. Hence infants carry the answer to their mysterious illness in their very own DNA. During genetic testing, a database of known symptoms and conditions is compared to the mutations of resulting sequence. If the mutations match any symptoms then treatment is done accordingly. But if the mutations do not match any symptoms doctors try to give their best possible treatment. After this process, DNA decoding is done which is to understand these mutations in our language. A small percentage of genetic mutations are associated with disease whereas many others are traits of unknown significance.

If the sequencing finds a rare defect in gene KCQN2 then it may be a good determining factor of Ohtahara Syndrome. Many other genes can also be associated according to some websites.The outcome can be different depending on the location of the mutated gene. Mutation in one part of the gene can be a cause of early age seizures but no serious long-term consequences. Children with such mutations develop normally. However, on the other hand, a mutation in other parts of the gene can cause persistent seizures that may disrupt development of the brain. The genetic testing can determine affected pathways. These pathways address a particular drug most probably an anti-seizure drug.

Hence Genetic testing is a powerful tool for diagnosing such disorders leading to better health outcomes. Genetic testing can provide many significant answers but still, it can not solve every mystery.

It is important to spread awareness about such syndromes as it takes 9 months to deliver a baby and almost few seconds to death. Parents need to be extra cautious if they have genetical problems and must opt for genetic testing of their babies. Genetic testing is proving to be a milestone for such mysterious illnesses.

Talking about future of children suffering from OS may develop infantile spasms (West Syndrome) or Lenox-Gastaut Syndrome(LGS) in future.

The Rare Epilepsy Network (REN) helps connect families with research in these areas.

Note: This article is to provide some information and create awareness. In case of a critical situation please consult a doctor.

Do you think genetic testing needs to be as important as a blood test in near future?

Good To Use Medical Alert Bracelets In Such Conditions 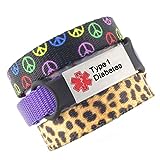