It is a biennial herb native to the central Mediterranean region. It is used both in cooking and as a herb in traditional medicine, since the times of the ancient Greeks, because of its exceptional and unique nutritional profile.

Parsley is of 2 varieties;

The leaf variety is of 2 types:

The flat leaf parsley variety resembles cilantro or coriander leaves and has a more intense flavour than the curly leaf variety.

Parsley is much used in American, European & Meditteranean cooking. It lightens the taste of garlic and when added to fish lessens its odor.

The root variety of parsley is called Hamburg root or turnip rooted parsley and has been developed for its roots about 200 years back though the leaf variety has been used for the last 2000 - 3000 years.

The tuberosum variety of Petrodelinum crispum produces thick roots that are used in soups and stews and also consumed raw just like carrots are. This variety is used in Central and Eastern European cuisine.

Before parsley started to be used as food it was used medicinally. The ancient Greeks held it as sacred and used it more for ceremonies like crowning victors of athletic events and decorating the tombs of the dead.

Parsley today is used in garnishing, salads, soups, stocks and for flavouring both vegetarian and non vegetarian dishes.

Parsley leaves are often chewed to keep the breath fresh.

Parsley is the most cultivated herb in Europe and the most used herb in the United States. Parsley is a tropical plant, that grows best in partial shade, though it can bear full sunlight. It grows in acidic to basic soil but the soil should be moist and drain well.

It grows to a height of 1 to 2 feet producing just leaves in the first year and flowering in the second.

It has bright green to dark green leaves and though the flat leaf variety resembles coriander leaves it has a comparatively milder flavour. Parsley seeds germinate quite slowly taking several weeks so it makes sense to start off growing parsley from seedlings instead.

The flat leaf parsley variety is more hardy than the curly leaf one, and withstands dry as well as cold and wet climates, like rain and snow.

The stems have more flavor than the leaves. Parsley is best used fresh though freezing parsley retains most of its flavour as well as nutrients.

Parsley flavor is best in the first year, the leaves becoming bitter in the second year.

The two year old roots as well as the dried leaves are used to produce parsley tea.

Parsley seeds yield the oil, Apiol, which has medicinal properties. 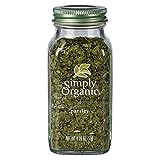 Parsley has a potent combination of several compunds including polyphenolic flavonoids, antioxidants and volatile oils. Roots have a greater concentration of these essential oils.

Besides being extremely low in calories and fat parsley is a zero cholesterol herb but provides a high fiber content.

Several of its volatile essential oils like myristicin, eugenol, limonene and alphathujene have health benefitting value.

It supplies good amounts of potassium and several minerals like calcium, copper, magnesium, manganese, zinc and phosphorus and several Bcomplex vitamins as well.

It is rich in the phytonutrients beta carotene, lutein and zeaxanthin. The leaves contain significant amount of protein, surprisingly for a herb.

Details of individual nutrient levels of the various compounds can be seen in the nutrient table below.

Overall, the various antioxidant vitamins, A, C, beta carotene, help lower the risk of atherosclerosis, diabetes and colon cancer and also reducing the severity of asthma, osteoarthritis and rheumatoid arthritis.

How To Make Parsley Tea

This hub would not be complete without mentioning some of the precautions that need to be taken with regard to parsley.

Some Of My Other Articles On Health

How To Harvest Parsley