Pets and the Elderly: A Beneficial Mix

Whether in long term care or still in their own homes our senior citizens can benefit from the presence of a pet, and there are no limits to the types of pets which can provide comfort and care. From the typical dog or cat and fish to the not so typical guinea pig, bird and donkey, pets fill lives with purpose and companionship. This became obvious to me when I observed my eighty year old mother’s reaction to Milo, a recently acquired cockatiel. The delight expressed on her face when he waddled onto her shoulder for the first time opened my eyes to the benefits animals can provide our elderly by simply being present. According to researchers over the last generation these benefits can range from decreased stress resulting in lower blood pressure to increased appetite and exercise. Fewer medications are prescribed and fewer doctor visits are required. 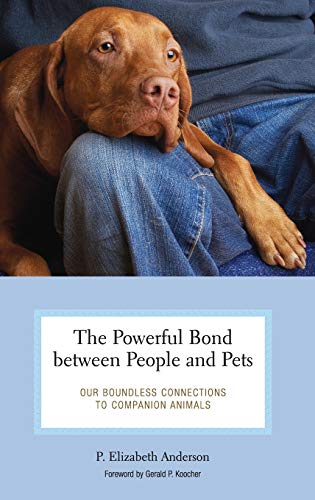 The Powerful Bond between People and Pets: Our Boundless Connections to Companion Animals (Practical and Applied Psychology)
Buy Now

While much of the research has focussed on animal interaction with human patients in a long term facility, the majority of elderly live independently. It is estimated that only 10 to 40% of today’s seniors will spend any time in an institutional setting (Hart), so the potential for benefit of a pet is greater in the independent senior. The elderly pet owner, especially among those who have lost a spouse, tends to remain more social and interactive with the community. The very act of walking a dog encourages contact with neighbours and strangers who respond more readily and favourably to the pet owner than the non-pet owner. It is interesting to note that these conversations tend to focus “on the present or future, whereas non-owners' conversations during walks featured past events” (Hart). Even those living with home assistance and therefore not able to mingle as much report they confide more readily in their pet than another person. Seventy-four percent reported feeling better after simply touching their pet (Hart).

This also translates into the long term care community where the benefits of having animals visit the residents is generally recognised. A visiting animal will often encourage interaction between residents as they relate memories of past pets. In the case of Alzheimer’s patients behavioural problems decrease and there is a noted increase in socialization with fellow residents and staff(Baun). More laughing was noted in the patient taking part in animal therapy as opposed to leisure time (Hart). Aquariums placed in nursing homes have promoted “a decrease in pulse rate and muscle tension and an increase in skin temperature” (DeSchriver). Adult Day Care facilities which care for the Alzheimer or Dementia patient have discovered similar benefits. In several cases unresponsive members have responded positively to the presence of an animal visitor, and many others when encouraged to brush and care for the dogs react with smiles which can last into the ride home from the centre (Interactions Vol. 25, No. 2, 2007). Yet such companions are not limited to the canine.

One manor has become acquainted with Outlaw the Guinea Pig. While it took the residents some time to warm up to Outlaw, he has become a much loved visitor and is responsible for breaking down pet barriers (Vol. 25, No. 2, 2007). Pino the miniature donkey delights many as he goes from various functions to hospitals. Elin Phillips his handler states the VA Hospital visits are the most memorable(Vol. 27, No. 1 2009).

Such pets are not the usual fare for the average independent senior. The typical cat or dog provides the same positive effect on psychological and physiological health. There are often difficulties with the independent senior citizen caring and keeping their pets. Whether financial or simply having to move to an apartment that won’t accept pets, Lynette Hart believes there is a lot of room for governments and organizations to create programs with sufficient follow-up to aid in the continuing therapy between our elderly and their animal companions. If the bond that I see growing daily between my Mom and Cockatiel Milo is any indication, governments would do well to encourage and support such programs and enjoy the consequences of fewer government dollars being spent on healthcare worldwide.