I am an idealist, an optimist, a romantic, often a traditionalist. My writing mostly revolves around the beauty in our lives.

Is Purple Sweet Potato The Secret To Longevity?

The diet of the residents living on the Japanese island of Okinawa has long been one of interest to scientists, dieticians, health practitioners and researchers, due to the world's highest concentration of healthy 100 year olds living there.

That is not to say that Okinawa has necessarily produced the world's oldest person - France takes that official credit with the greatest fully authenticated age to which any human has ever lived in 122 years and 164 day old Jeanne Louise Calment, who was born on 21 February 1875 and died on 4 August 1997. (1)

Okinawa does however have an impressive average life expectancy that continually lures researchers who are in search of the secret ingredient of old age. Whilst the average life expectancy of Americans is 79 years old, it is 84 years old in Japan, and five times more Okinawans live to 100 years old than their other Japanese counterparts. (2) So, finding the secret to the Okinawa fountain of youth is compelling.

The humble purple sweet potato is featuring more and more often in research findings, to the point that it is now heavily favoured to be the answer to the Okinawan long-life mystery.

The super ingredient in Purple Sweet Potato is the antioxidant, anthocyanin.

Sweet potatoes of all varieties and colours are high in Vitamin A, Vitamin C and Manganese. They are also a good source of copper, dietary fiber, vitamin B6, potassium and iron. But the super dose of anthocyanin in Purple Sweet Potato is believed to slow aging by boosting learning and memory; reducing cholesterol; improving heart health; and, it may also prevent cancer.

Purple Sweet Potato Is The Daily Staple Of The Okinawa Diet

The people of Okinawa eat up to half a kilogram of Purple Sweet Potato a day. (4)

Whilst we might think that the typical Japanese diet consists largely of rice and raw fish, the Okinawan diet stands apart from it's Japanese counterparts with a predominance of 70 percent Purple Sweet Potato, followed by 12 percent rice, seven percent grains and wheat, six percent soy and legumes, four percent other vegetables, three percent fruit, two percent oils, one percent nuts, one percent seaweed, one percent sugar, one percent fish, one percent dairy, one percent eggs, one percent meat,and one percent alcohol and flavourings. (5)

Hara Hachi Bu is a self-imposed practice of calorie restriction, where the Okinawans eat until they feel 80 percent full. Their calorie consumption is approximately 1800 calories per day and an elderly Okinawa's body mass index (BMI) is about 18 to 22, compared to a typical BMI of 27 for American adults over the age of 60. (8)

The practice of Hara Hachi Bu helps the stomach stretch receptors recognise the feeling of fullness, and hence the combination of mental willpower and physical satiety limits food consumption. A lack of self control and always eating until completely full, results in a constant stretching of the stomach, which in turn, increases the amount of food required to create a feeling of fullness - a viscious circle of overeating.

How To Eat Purple Sweet Potato - My Three Favourite Recipes 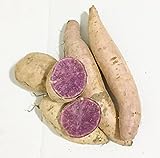 Fresh Purple Sweet Potatoes-2LBS
Obviously the first ingredient you will need is the Purple Sweet Potato! Unfortunately, they aren't always as readily available in our grocery stores as they should be, so if you cannot find them locally, you can order them online and have them on your doorstep as quickly as within 24 hours. You can buy them in two pound or four pound orders, and this supplier has a an excellent rating of 98 percent over the last 12 months, especially from customers who know their product and what to expect from Purple Sweet Potatoes.
Buy Now

What To Eat If You Can't Buy Purple Sweet Potato

The magic age-defying ingredient in Purple Sweet Potatoes, anthocyanin, is what gives the bright red-orange to blue-violent colour in fruits and vegetables.

So if your supermarket doesn't stock Purple Sweet Potato to keep you kicking into your hundreds, you can still get anthocyanin in other fruit and vegetables - not to the same high levels, but definitely to a level that will benefit your health and longevity. Try blueberries, blackberries, strawberries, raspberries, black currants, grapes, eggplant, purple cauliflower, purple onions and red cabbage.

Purple Sweet Potato still has 150 percent more antioxidants than blueberries (9), but an American six year neurological study of 16,000 female patients in their 70s and older, found that blueberries and strawberries specifically, can delay mental aging by up to two and a half years. (10)

So, the moral of the story is - eat your red and purple fruits and vegetables, and it's never too late to start!

Had you heard of Purple Sweet Potato and its angi-aging properties before?

Is Purple Sweet Potato In Your Diet?