The Benefits of Drinking Red Wine

Is red wine beneficial to your health? Recent studies show that consuming red wine daily can have a positive impact on your health. The key benefactor in red wine is the polyphenol Resveratrol. If like me, you aren’t a scientist, you may be wondering what a polyphenol is. Polyphenol is an antioxidant found in many foods. Examples include; legumes, honey, grapes, pomegranate, cranberries, cherries, blueberries and green tea. Polyphenols are thought to have anti-cancer properties and can reduce instances of coronary artery disease (Scalbert, 2005).

A Brief History of Red Wine

Red wine was thought to have originated in Ancient Egypt around 6000 BC. Although the origin of red wine is not entirely sure, it is believed that red wine was discovered by accident. Researchers say that it is likely that farmers were storing grapes and may have left residual grapes in their containers, thus leaving the grapes to ferment producing wine. The first known vineyard was discovered around 4100 BC in a cave in Armenia (Coffey, 2011). Over the centuries, wine making spread north to regions such as Iran, Greece and Rome. Wine became very popular in ancient Greece and Rome, and is still one of the main producers of wine today.

Studies show that consuming red wine on a regular basis can be beneficial to one’s health. Benefits include:

According to the Center for Disease Control, In the U.S. approximately 25.8 million or 8.3% of the population have diabetes. Red wine can help reduce blood sugar levels when consumed in moderation, and reduces the chance for developing diabetes later in life. The key benefactor for preventing diabetes are the lingands (ions or molecules commonly found in certain medicines) which are abundant in red wines. According the journal “Food and Function”, studies show that 1-2 glasses of wine contain more lingands that the drug Avandia, which is used to treat type 2-diabetes (Zoechling).

Found in red wine, resveratrol is a polyphenol with antioxidant properties. Resveratrol has been known to have an antithrombotic effect and can expand the blood vessels. Resveratrol also aides in circulation, which can reduce the chance of developing blood clots.

In today’s society, the term “antioxidant” has become quite popular, but what exactly is an antioxidant? An antioxidant is a molecule that prevents oxidation of other molecules. Oxidation reactions can create free radicals, which in turn, creates a chemical reaction. In terms of a living cell, this chemical reaction can cause death or damage to a cell, an example would include a cancer cell. Antioxidants such as the polyphenol resveratrol can prevent oxidation process from happening, thus preventing cell damage. Red wine has antioxidant properties which may prevent the growth of cancer cells.

Ever heard the term “French women don’t get fat?” apparently French women rarely get coronary heart disease either. Despite a high saturated fat diet, the French have a 42% lower risk than Americans of having coronary heart failure. This can be contributed to a myriad of factors such as eating more fish, smaller portions, active lifestyles and consuming more red wine. Resveratrol may be responsible in the lower instances of coronary heart failure, as it widens the arteries when consumed, preventing heart failure.

Which Red Wine Do I Buy?

When I first discovered that red wine could help improve my circulation, I drove straight to my local Total Wine. I must have spent an hour debating which wine would be most beneficial, but finally I had decided on a nice Pinot Noir by Deloach.

I enjoyed the Deloach Pinot Noir very much, but my favorite in terms of flavor would have to be 14 Hands Merlot. Merlot has always been my first choice as it has a medium body flavor, which is not too strong and very enjoyable. There are many varieties of red wine to choose from including: Merlot, Pinot Noir, Zinfandel, Cabernet Sauvignon, Malbec, and Grenache. Some say that darker wines are best if you are looking for high resveratrol content. I would recommend choosing a wine that you enjoy.

When Alcohol Becomes a Problem 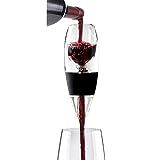 Scalbert, A. (2005, Jan). Polyphenols: antioxidants and beyond. Retrieved from http://ajcn.nutrition.org/content/81/1/215S.full

Coffey, A. (2011, Jan). History of red wine. Retrieved from http://www.redenvelope.com/gift-guides/history-red-wine-1/