The Science Behind Self-Affirmations - Why They Work 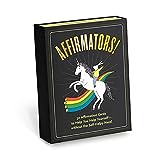 Affirmators! 50 Affirmation Cards Deck to Help You Help Yourself - Without the Self-Helpy-Ness!
Buy Now

A simple definition from Wikipedia states:

An affirmation is a form of autosuggestion in which a statement of a desirable intention or condition of the world or the mind is deliberately meditated on and/or repeated in order to implant it in the mind.

While often associated with New Age religions, affirmations are anything but touchy-feely. They are based in hard, solid fact; the science of neural operation in your brain. While not a magic incantation, and definitely never a substitute for medical treatment, there is nothing more scientific than the process of self-affirmation to positively affect your mental health.

The Structure of a Neuron

How Do Affirmations Work?

Affirmations, when practiced deliberately and regularly, reinforce a chemical pathway in the brain, making the connection between two neurons stronger, and therefore more likely to conduct the same message again.

Think of a dry piece of flat land. When it rains, the water has no place to go, until it cuts a path through the land. At first, it is simply a small rivulet -- but as more water runs through it, it cuts a deeper and deeper indentation into the earth, and the deeper the indentation, the more water will ultimately run through it.

Affirmations work similarly. In neurology, this concept is summed up in the phrase, Neurons that fire together, wire together. Neural synapses that are seldom or never used get efficiently eliminated by the brain's cleaning crews, made up of glial cells. Neurons that are routinely fired in a specific pattern will strengthen their bond, "wiring together" in a complex network that will be automatically set off whenever a trigger is presented in one's everyday life.

How Do You Use Affirmations Effectively?

Most of the proponents of self-affirmation agree that effective power statements adhere to three key conditions, summed up by Jeff Staniforth, the respected metaphysical scientist behind the Sculptor 3 Affirmation Software, thus:

1) They're stated in the present tense.

2) They express a positive statement.

Affirmations need to be stated in the most positive terms possible. Avoid negative statements. Affirm what you do want, rather than what you don't want. For example: "I am no longer sick." This is a negative statement. Instead, affirm: "I am now perfectly healthy in body, mind and spirit." This statement is much more powerful as it is positive and reinforces your desired goal and doesn't confuse your subconscious mind with the mention of the undesirable condition.

3) They're short and specific.

Short affirmations are easy to say, and have a far greater impact at the subconscious level than those which are long and wordy. Keeping them specific and to the point adds power as the idea is uncluttered by extraneous elements.

In addition, affirmations must be practiced regularly to have and keep their full effect on your thinking. As with your body, you must exercise your mind to see positive results.