As of writing this article, I'm a mostly healthy 35 year old woman. I do yoga every day, go on 20+ mile hikes every summer, run when it's warm enough to do so, do my best to eat a healthy diet and generally avoid sickness. However, I was recently diagnosed with shingles.

How do you get shingles?

If you've ever had chicken pox, you are at risk of developing shingles sometime in your adulthood. Chicken Pox is the nickname for the common herpes zoster virus. You may have heard the saying, "herpes is for life", and that's very true. Once the lesions from this childhood illness clear up, the virus never leaves the body. Instead, it settles into a section of nerves. It then stays there for decades, until something happens to trigger an attack.

Those with HIV or other immunocompromising conditions are at high risk, as are people over the age of 60. However, more young people are coming down with the disease. Stress is a common cause of lowered immune response, as is the case in many college students and adults. There is speculation that a contributing factor could be the use of the chickenpox vaccine.

The theory is that part of why younger adults were less likely to get shingles is because they were regularly exposed to the chickenpox virus. Their immune system developed antibodies to the subtly different strains, which in turn kept the virus nestled into their nerves at bay.

Although the chicken pox vaccine prevents an active outbreak, or lessens infections that do occur, in children, since it was first used in the mid 1990s, we won't know for certain if it will prevent later shingles infections until that generation enters their later years. That said, the likelihood is high that it would.

Shingles can be very tricky to diagnose before the rash actually appears.

In my case, I first experienced an upset stomach and intestinal cramping, as if I had eaten something I shouldn't have, or caught one of the infections going around. The skin of my stomach then started to itch. It felt a great deal like I had dry skin. Since these symptoms happened shortly after Christmas, I dismissed them as indigestion from too many rich foods and dry skin from the Minnesota winter air.

Two weeks later, and one day after a vicious cramp in my side, two small patches of raised, pink skin showed up to the left of my belly button. They stung when I scratched them, and the day after, blisters appeared. I made a doctor's appointment on the third day, because another lesion showed up and I couldn't figure out what was going on. I saw the doctor on day six, at which point a larger blister had already shown up.

Now, the pain alternates between a burning sensation, and as if someone was stabbing needles into my stomach. Occasionally, an intense tickling sensation happens, as well. Whenever I breath in deeply or fabric brushes against the rash, it flares up again.

Shingles can happen on various parts of the body. When it happens higher on the abdomen, some patients have described ongoing muscular cramps.

The most dangerous spot for the lesions to occur is on the face. Before the rash shows up, the person will often experience excruciating head, ear and/or eye pain. It's imperative that degree of pain is treated as soon as possible, because it may also have other causes. The rash will then appear on one side of the face and head. If this happens to you, get medical attention as soon as you can.

In all shingles cases, the rash will only appear on one side of the body. It starts out as relatively harmless looking, but quickly graduates into painful blisters. If not treated early enough, these blisters can spread to large patches of skin supplied by the infected nerve.

If you suspect you have shingles, get to the doctor right away. You will probably be put on some sort of antiviral medication, will be given information about how to treat the rash itself, and a personalized assessment complication risk factors.

You cannot give shingles to another adult who has already had chickenpox as a child, because they already have the virus somewhere in their body. That means coming into close contact with you will not provoke a shingles attack in them.

However, broken blisters can give someone who hasn't had it before chicken pox. If you have people in your life who haven't had the vaccine or the disease, minimize contact with them until your rash clears. This is especially true if they're over the age of 8 years old.

Chicken pox is most often a harmless childhood disease, but it can be very serious in older children and adults.

Like all diseases, complications are possible, and some of them are long term.

Shingles is most likely to happen on the abdomen, as in my case, and the most common complications are the first two. Early treatment can lessen your risk for all of these issues.

How is shingles treated?

Your doctor may prescribe you an antiviral medication, especially if you make the appointment early on. This medication will help your body fight the infection by targeting the virus and killing it off.

As with all medications, research possible side effects and drug/vitamin/food interactions before you start taking it.

There are many different treatments for the rash itself. There are three different aspects of the rash.

I've been treating the first two with ibuprofen, cortisone cream and a baking soda/water paste. Other shingles patients have had luck with using cool/cold compresses, calamine lotion, corn starch and other natural remedies.

To treat the inflammation, you can use any over the counter antiinflamatory medication you're already used to, provided it doesn't interact with any prescriptions you're put on. Ibuprofen (Advil) has been my go-to medication, but acetaminophen (Aspirin) and naproxen (Aleve) would work, too. You may also be able to find or make some topical creams to help with the swelling.

Be very gentle when cleaning your rash, and if you decide to try using creams, make sure they're thin enough to allow the skin to breath, and are free of harsh chemicals. The blisters will break, so using things like baking soda or corn starch will help them dry out more quickly, thus minimizing chances of infection.

To make a simple baking soda paste, I cup a small amount of powder in my palm, and add water until it forms a paste. I then apply it to the lesions and let it dry. It will feel cool as it dries, which helps with the pain, and will leave a white residue.

Once dry, gently rinse it off with water, taking care not to rub the area. Pat it dry with a towel.

Oatmeal baths might help, as well. I've lost my affection for taking baths, but if you enjoy them, they might help alleviate some of the symptoms, especially if your rash is large.

The nerve pain is much trickier to address. Cold compresses may help with that, because they give your body something else to concentrate on. Staying active may also help minimize the pain.

If your rash is on your abdomen, wear loose clothing, because even fabric brushing against the skin will set off a pain response. This can get tricky in the winter, especially in colder climates, because you need to stay warm, which means layers may be necessary.

As always, if you have chronic health conditions, take extra care to manage them well. My asthma and scoliosis have been a little worse than usual, because of the extra stress my body's under.

Shingles is an extremely painful, potentially serious infection, but if caught early enough, you can treat it successfully while minimizing your discomfort. It's best to get treatment within three days of the rash's appearance, and to pay closer attention to strengthening your immune system when an outbreak does happen.

When in doubt, check it out. 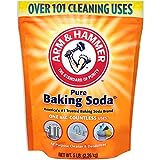 Arm & Hammer Pure Baking Soda, 5 lb
Well, you probably won't need five pounds of baking soda to treat shingles, but it's also an incredibly useful household cleaner, as well. It has helped with my rash so far, and I use it all the time when doing chores. Buying in bulk really saves money, in this case.
Buy Now