I was diagnosed with Temporo-mandibular Joint Disorder, or TMJ, in 2005. And, actually, I was the one who ultimately did the diagnosing. In February of 2005, I noticed a dull ache coming from what I thought was my left bottom molar. Thinking the tooth I had had a root canal on a few years prior was hurting, I set an appointment with a dentist. After the dental hygienist x-rayed me and performed a cleaning, I saw the dentist. He examined me and said there was nothing wrong with the molar on which I had had a root canal. He informed me the root had been removed, and thusly, I should feel no pain in that tooth. Now, I had heard of the term TMJ over the seven years prior to this appointment. (Ironically, I think I had first heard the term while I was on the phone with a dentist in regards to pain meds for that very root canal. I was on hold and the recorded voice started describing TMJ and how not all dentists were aware of its symptoms. Funny, how things stick to you.) Anyway, the dentist didn’t provide any explanation for the pain I was experiencing in my tooth.

He thought about this for a moment and said, “Yes, it could be.” He then referred me to an otolaryngologist (or ENT: ear, nose, throat doctor) who could look further into it.

So, I set the appointment with the otolarygologist and went to see him a few weeks later. The first thing the ENT doctor did was have one of his audiologists perform an ear test on me. This annoyed me as I wasn’t concerned with my hearing, but apparently, this was routine. The audiologist tested my ears (while he had me hold my crying infant son, further annoying as you can’t concentrate on quiet tones with a child in your arms—this further annoyed me, I digress), and then gave the results to the ENT doctor. The ENT doctor reviewed them and then told me the test results showed I had problems in my right ear picking up high pitched tones. I said that was all well and good, but I was concerned about my left bottom molar pain. He said he didn’t know why that would be bothering me.

The first thing the oral surgeon told me was “I’m a surgeon, so my first instinct is to operate.” He had me view a fifteen minute video on what TMJ is and how an attempt for correcting it can be done via different surgical operations. That’s right, an attempt as TMJ is not always correctable. After viewing the video the oral surgeon felt my jaw and had me open and close my mouth a few different ways. His diagnosis was TMJ. Ta-da! Vindicated at last. He instructed me to use ibuprofen, cold compresses, and perform four different mouth movements five times a day. He also told me not to ever chew gum again. (Being told never to ever do an action for the rest of my life was very depressing. Never ever again. It felt like I was that much closer to dying; something had been taken from me.) I was to do this for a month and then report back to him. I did this and, I’ll be honest, I didn’t follow the jaw exercises to a tee as they seemed to increase my jaw pain. When I told the oral surgeon this he told me not to force the exercises if it caused more pain. He examined my teeth and their bite and said he saw no sign of grinding. If I had been a teeth-grinder he would have recommended a night guard or daytime splint for me to wear. Basically, his plan in my combating the dull ache that radiated now from my left molar tooth to the left side of my jaw and ear was to perform the jaw exercises, take ibuprofen and use cold compresses when needed. I had also noticed over the last ten years that blowing up balloons caused a popping sensation in my left ear and temple. In response to this information, he simply said to stop doing anything that triggered any form of discomfort in my jaw. Other than the therapy he had prescribed me, he said surgery was my other option. I said, eh, it ain’t that bad, doc.

That was six years ago and I can honestly say I have learned to cope with my TMJ flare-ups and I seem to know now what causes them. Below, I have listed what seems to cause TMJ discomfort and what methods you can use to ease them.

What is TMJ Disorder?

The Temporo-Mandibular Joint is the joint that connects the lower jawbone to the side of the bony skull. The actual joint is made of triangular-shaped cartilage that is similar to a ball that slides up and over when you talk, chew, kiss, laugh, ect. Basically, anytime you open or move your mouth. On a normal healthy jaw, this joint slides easily up and out from its groove. However, this cartilage can become weak or displaced, and actually get stuck. The pain one feels is from the irritated muscles of the joint no longer gliding smoothly back and forth. For some TMJ sufferers, the jaw can actually be lodged into an open position if the jaw joint gets stuck. If this happens, take a warm washcloth and gently massage your jaw and the area around the outside of your ear until you can carefully close your mouth again. Do not force the movement! If this method does not work, contact your physician for further instruction.

Toothache that can’t be explained by a dentist

What Can Cause TMJ?

You can have one, some, or even all of the symptoms below. Each TMJ sufferer differs from the next one. 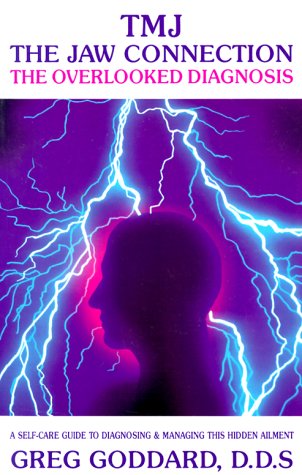 Tmj, the Jaw Connection: The Overlooked Diagnosis: A Self-Care Guide to Diagnosing and Managing This Hidden Ailment
Buy Now

How To Relieve TMJ Pain

Here are some methods to consider trying if you are experiencing pain related to TMJ. This can be pain in the jaw, ear, head, neck and/or face.

These are the exercises my oral surgeon instructed me to do. They are to be performed slowly and gently five times, three times a day.

…Applying A Cold Compress to the area of pain (it can be a washcloth wrapped around ice cubes (don’t chew the ice!)) for no longer than 15 minutes at a time

…Ibuprofen such as Advil (follow dosage amounts on the package)

…Focus On Not Clenching Teeth or Jaw Muscles (in time, you will notice when you’re doing this)

…See Your Dentist or Oral Surgeon to be fitted for a splint (this is a mouth guard you wear 24 hours a day. They typically last nine months)

If nothing seems to work for your TMJ, or if your pain is increasing, an oral surgeon can suggest different surgical procedures that may eliminate the discomfort.

TMJ is a jaw disorder that is gaining more attention everyday. I have been a sufferer for six years now. While I have avoided surgery, I have used many of the home remedies listed above and they seem to do the trick. What seems to work best for me is using ibuprofen and remembering to relax my jaw when I experience flare-ups. Keep in mind one method or remedy may work well for one person, while not as well for another. Ultimately, the best way to overcome TMJ is to reduce stress and relax that jaw!