The Awesome Health Benefits of Grapes

More about Grapes and Resveratrol in Peanuts 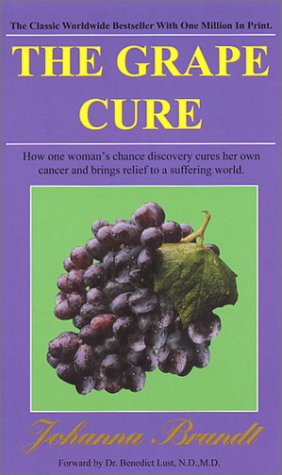 This was written February 18, 2012. This may be the single healthiest common food that there is. Have you heard of the grape cure? This is the name of a book written by a woman that cured her cancer by only eating grapes for a couple of months.

Note that to go back to other webpages, right-click on the BACK button for menu. The links are blue.

She was experimenting with fasting and learned about just eating grapes . Then she came to the U.S. and worked with an M.D. They found 10 people with cancer, that were in very bad shape and all were cured. She also learned from medical encyclopedias that in Europe they have been using the grape cure for hundreds of years for all sorts of problems.

That is why grapes are in my article on Great Foods That Fight Cancer. It is only in recent years that they have learned about all the phytochemicals that are in grapes like resveratrol, oligomeric proanthocyanidins (OPCs), ellagic acid, chlorogenic acid, epicatechin, quercetin and more. What are phytochemicals?

Eating grapes on an empty stomach has a powerful cleansing effect. Before learning about the Many Benefits of Fasting, I ate nothing but grapes for 11 days. It had a cleansing effect similar to fasting but not as strong. Also it is easier to eat only grapes than to fast (that means only consuming pure water and nothing else).

If you can get organically grown grapes, then you should since Organic Food is Important. But if you cannot get organic grapes, then just eat conventional grapes. Here is what the University of Maryland Medical Center has to say about grapes:

Grapes (Vitis vinifera ) have been heralded for their medicinal and nutritional value for thousands of years. Egyptians ate grapes at least 6,000 years ago, and several ancient Greek philosophers praised the healing power of grapes -- usually in the form of wine.

Round, ripe, sweet grapes were used to treat a range of health problems including cancer, cholera, smallpox, nausea, eye infections, and skin, kidney, and liver diseases. Resveratrol has become very popular as an antioxidant and is being studied in connection with a variety of diseases.

There has been a lot of research on resveratrol and it appears to have anti-aging benefits. Before this the only thing proven to be anti-aging was reducing the calories that you consume. Please note that as far as "calorie restriction" goes (that sounds bad-- it is better to say reducing calories consumed), many unhealthy foods have tons of calories whereas many vegetables have tiny amounts of calories. Also Japan has the longest living people. A woman from Japan said that Americans eat huge amounts of food compared to Japanese people.

Look at what this website (smart-publications.com) says about resveratrol, anti-aging and calorie restriction:

There are numerous theories, however, as to how it produces a wide range of health benefits. Harvard researchers have noted there is evidence suggesting that calorie restriction can extend lifespan across a range of species. And after screening thousands of molecules, they found that resveratrol mimics calorie restriction in yeast: activating enzymes that slow aging, increasing the stability of DNA, and extending lifespan by as much as 70%.12 Researchers suspect plants make these age-slowing molecules as a defense response.

Another Harvard research team recently found that resveratrol improved the health and survival of obese mice. Resveratrol increased insulin levels while decreasing glucose levels, resulting in healthier liver and heart tissue when compared to obese mice that did not receive treatment. "After six months, resveratrol essentially prevented most of the negative effects of the high-calorie diet in mice," said study co-author Rafael de Cabo of the National Institute of Aging (NIA).3

The above describes the French paradox as follows. The French people drink, smoke and eat a lot of cheese. Yet, despite a diet that's relatively high in fat, they have a 42% lower incidence of cardiovascular disease than Americans do. Cardiovascular disease causes the first and third leading causes of death in the U.S., strokes and heart attacks (AKA cerebrovascular accidents and myocardial infarctions). To prevent the second leading cause of death, make sure get lifeguard levels of the sunshine vitamin to prevent cancer. See Cancer and Power of Vitamin D.

"Resveratrol is a very powerful chemical that seems to protect against the body's inflammatory process as it relates to aging, cognition and hearing loss," study researcher Michael D. Seidman, the director of the Division of Otologic/Neurotologic Surgery at Henry Ford Hospital, said in a statement.

An L.A. Times article mentions another study with similar results as above:

The study, conducted in the Netherlands and published this week in the journal Cell Metabolism, found that men taking 150 milligrams of resveratrol daily for 30 days looked for all the world as if they were either dieting successfully or were engaged in endurance training.

Without changing their diet or exercise habits, the men's metabolic function improved, evidence of inflammation declined, fat deposits in their livers decreased and circulating triglyceride levels fell. While their bodies burned up the same amount of energy over a 24-hour period, their bodies' resting and sleeping metabolic rate declined and their muscles' use of fuel became more efficient -- signs that they were using and storing calories more like athletes in training than obese couch potatoes.

This is just one phytochemical mentioned above. Grapes also contain quercetin. According to studies done, quercetin has been shown to be antiviral, anti-inflammatory, anti-allergic and have antitoxic effects. It helps with cancer, fibromyalgia, diabetes, heart disease and metabolic syndrome.

Another phytonutrient in grapes is kaempferol. Kaempferol seems to prevent arteriosclerosis by inhibiting the oxidation of LDL (the bad cholesterol) and the formation of platelets in the blood. Also I have another article called The Grape Cure for Cancer and Detoxification. It goes into details of how to use it to cure cancer.

Ellagic acid (another phytochemical in grapes) has anti-mutagen, antioxidant and anti-cancer properties. Studies have shown the anti-cancer activity on cancer cells of the breast, esophagus, colon, skin, prostate and pancreas. There are lots of studies showing the anti-aging effect of resveratrol, but 2 drug companies disagree with this conclusion. Of course their goal is to make money and they will not do that by you eating grapes and being healthy. They make money by you being sick and taking their drugs.

Raisins are concentrated grapes but do not appear to have the same cleansing effect as eating grapes. But they should have all the nutrients in grapes. Raisins do not need to be refrigerated to last a long time. Some have reported a similar effect as eating grapes by eating raisins and grape juice. The crisp grapes taste the best. I guess that they are fresher.

Last summer I was outside eating crisp grapes. Two neighbors were walking by-- a six year old boy and a three year old girl (Dylan and Chandra). The boy asked if they could have some and I said "yes" and stopped eating them myself. They ate a few and the boy asked if they could have more. I told them that they can eat as many as they want to and they ate all the rest of the grapes. I usually eat a pound of grapes or more on an empty stomach.