The Effect of Friendship on Our Brains

The Benefits of Friends

Our brain actually has a response to friendship.

“The language of friendship is not words but meanings”

Some people give us unconditional love and support, who are there to share our happiness, our sorrows, our celebrations, and the most mundane of things. They may not be related to us, they are our friends.

Friends, it has been proven give us improved emotional and physical health. They may be long time friends, they may be new in our lives, they may be our mates, our childhood friends, co workers, family, neighbors, they are the people we have included in the inner circle of our lives.

Friends give us support. Research is now showing even if the support is perceived support, even if it is merely our perception of support, what our brain believes, our body responds.

The Science of Friendship

The science behind this thinking begins with understanding what happens when we feel threatened or stressed. When we are under duress, several brain regions, including the hypothalmus, process these threats. The hypothalmus helps govern the release of cortisol, a hormone released in response to stress. Cortisol at excessive levels is associated with depression, cardiovascular disease, and lower life expectancy.

Studies have shown, when people who care about us are near, we react less to stress, and therefore, less likely to produce stress hormones. When we feel we have to face difficulties alone, our stress levels go up.

When it is our friend who is threatened, our stress hormones go up similarly. The closer the self reported participants felt towards each other, and identified with each other, in a study done by Jim Coan, the stronger the correlation. This study shows closeness in friends, blurs the individual separateness and how the brain processes threats. To our mind, we become one with our friends.

When we feel like we belong, our body and brain react positively, which translates to better physical health.

It is obvious that friends are an integral part of a balanced and fulfilling life. As we get older, brain scans are helping us understand the benefits of friends in keeping us physically and emotionally healthy. Studies are showing the risk of developing dementia decreases with social connections. Women who have a large network of friends have a lesser risk of lower cognitive functioning as they get older. Loneliness is linked to doubling the risk of developing dementia.

Friends Are Good for Our Brains

We gain brain resilience when we participate in different leisure activities. Neuroscientists believe our we have greater cognitive reserve (resilience to damage or decline of the brain) when we are involved with other people. When we interact with others, we think more, feel more, sense more, reason more, and we use our intuition more. These are all mentally stimulating activities, which stimulate brain cells and promote new connections.

In a study done by Professor Julianne Holt-Lunstad, of Brigham Young University, it was found people who have a social network and feel responsibility for other people have a greater sense of purpose and take better care of themselves and also take fewer risks.

Friendships are designed to make a positive difference for our body and our brains. It is in our nature to want to belong, to create a close ccircle of other people around us. It is part of our evolutionary history. The brain generates feelings of empathy.

When we interact socially our mirror neurons kick in. Mirror neurons intentionally work this way to increase that feeling of being connected by helping us imitate what others are feeling, what they might think, and how they might react. This in turn creates a mutual feeling of bonding.

Our ability to empathize is the building block of friendship. Language is integral to empathy. Our ability to communicate, to share our thoughts, ideas, and emotional experiences through the spoken, unspoken, and written languagel promotes bonding and understanding of each other.

The brain and our body responds positively to stronger bonds. The more pleasurable our friendships are, the more stimulated our brain is. Scans show people who are isolated and alone have unstimulated and unhappy brains. Scientists at the University of Virginia discovered that people closely correlate with people they are attached to. Jim Coan believes the study shows our brain has the capacity to make other people part of ourselves.

In another study done at the University of Virginia Professor Dennis Proffitt had 34 students stand at the base of the Hill that was very steep to evaluate how steep it was. The students who stood next to their friends gave a lower estimate of how steep it was compared to those without friends nearby. metaphorically challenges we Face a head may seem less tough when we have friends we can turn to.

In a 10-year study done in Australia it was found that people who had a strong social network what 22% more likely to live longer and people who had fewer friends this study fan family and children have no influence on this longevity positive friendships how people live longer. it is believed that through friendships we share common interests we engage in stimulating mental conversation and the encouragement of quick thinking help our brain says remain active.

In a study done with 3000 nurses with breast cancer comment those with close friends were nearly four times as likely to survive then those without close friends. friends help us stay positive and survival is very much influenced by the desire to live. Exercise is beneficial for the brain. Fit friends are more likely to help you stay fit in 2007 Professor Nicholas christakis and James Fowler conducted a study showed a 60% increase Indian overweight when their friends were obese too. Same sex friends had a larger influence on gaining weight and Friends of spouses or friends of the opposite sex when friends follow a healthy lifestyle and good nutrition they usually rub off on their friends.

in a Swedish study 13,395 Swedish employees had their stress levels assessed and it was found that those would strong social connections have fewer cognitive complaints such as concentration thinking and decision-making. Friends also help us relax and give balance to our lives. friends give us someone to turn to and our brains know it. Our social life matters.

In four large research studies, using hundreds to thousands of people, ranging from ages 12 to 91, scientists compared blood pressure, waist circumference, levels of inflammation and body mass index. These biomarkers were better in people who had strong social ties. People who did not have close social connections had more than double the risk of very high blood pressure. In this study, the researchers were able to see how the biomarkers changed over time as their exposure to social connections changes.

Studies have found, friends who gain weight, cause their friends to gain weight. In the New England Journal of Medicine in 2007 it was also found when friends lost weight their friends got thinner too. Enlarge health study done at the framington heart study researchers were able to draw casual inferences it was a 50% more likelihood when a friend gained weight another fFriend gained weight in a study done in 2011 at the University of California people who had friends who exercised the Nate well and lost weight had friends who did the same.

Research done on cancer patients found right when they were going through tough times like this friends helped a major study was done in 1989 at found women who had breast cancer or randomly assigned support groups with other cancer patients reported better quality of life and live longer compared to those women who and I signed to any support group.

When we feel like we belong, our body and brain react positively, which translates to better physical health. In a 2012 study, published in Journal of Neurology, Neurosurgery and Psychiatry, elderly people who were lonely had an increased risk of dementia. More than 2,000 65 and older residents of a senior center in the Netherlands were studied. None of the people in the study had dementia at the beginning. Of those who were lonely at the start of the study, 13.4% developed dementia, compared with 5.7% who didn’t feel lonely. Lonliness was defined as the perceived absence of social connections. The study did not determine didn’t determine that loneliness was a cause of dementia, it found an association.

Friends can live far away and still help keep us healthy. It is not the proximity, it is the emotional closeness, quality of the relationship, the perceived closeness.

While study after study validates what friends can do for each other, the truth is, all of us already know and feel this. Friendship is a gift. Appreciate and celebrate your friends for all they give you and you give them.

Are you still friends with someone from your childhood 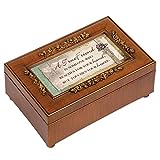 A beautiful music box and perfect gift for a special friend