Traditional Chinese Medicine takes a holistic approach. Whereas in the West diseases are specific to a certain part of the body, Chinese believe that all the systems of the body are interconnected. If there is a problem with one part of the body, it can affect other areas in the anatomy. Also, changes in the environment can have an affect on the body rhythms and cause illness.

My first experience with Chinese Medicine was when I first moved to Hawaii 18 years ago. I went to a Chinese friend's home for dinner. I had just moved here from a third world country and had experienced a few health problems. He brought out an instrument that he told me would give him a diagnosis of anything wrong in my body. He is a school teacher, so I was a bit skeptical about it, but thought it might be fun anyway.

He explained that the human ear is just like a reverse fetus. According to the theory of Chinese Traditional medicine, each human organ has a corresponding point on the ear. If a certain organ has any disease or changes, it will emit a bio-electrical current from the corresponding point in the ear. By listening to the instrument carefully, a person can detect if there is a problem in any area of the body.

So my Chinese friend moved a little stylus over every part of one of my ears listening intently for any changes in his Hua-han electronic acupuncture device. It tickled a bit, but did not hurt at all. To my amazement and wonder, when he was finished, he asked me if I had liver problems. I told him that I had hepatitis B while I was living in the South Pacific islands and had been very sick with it. I have since been told I have PBC Pulmonary Biliary Cirrhosis. Then he asked if I had trouble with my knee joint. I injured my left knee severely as a young lady and have had trouble with it ever since for which I have been told I need a knee replacement. 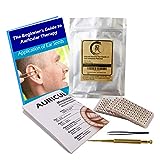 He further explained that diseases are caused by a block of meridian channels in our body. The block causes pain. If there is no block, then there is no pain. The instrument he used picked up the bio-electric currents and he could hear that those two areas, my liver and knee, were indeed blocked. I was beside myself because I had not mentioned anything about my hepatitis or knee problems before I got there. It seemed magical to me.

I have since read quite a bit about Chinese Medicine. They believe that the body's vital energy (chi or qi) circulates through channels called meridians. If there is an imbalance or interruption of this vital energy, illness or disease results.

Chinese claim that over 200 kinds of disorders have been treated with ear acupuncture with an 85 percent effectiveness rate. Sometimes they add electrical stimulation to acupuncture needles to treat disease. Chinese commonly practice self massage of the ears on a daily basis to prevent disease which certainly couldn't hurt and may actually work.

I have not had acupuncture, but believe it may work according to my experience with my Chinese friend. Acupuncture is used to restore balance of the chi in the body. Of all that I have learned about Chinese medicine, the theory behind auricular acupuncture is the most interesting to me. Too bad it has gotten a bad rap from the Western world. The Chinese have treated disease by using points on the ear for centuries.

A Bit of Humor helps your body heal itself too