What are the Reiki Symbols?

The Reiki Symbols are used by Reiki Practitioners during a Reiki session. Each symbol has a specific purpose and they can also be combined and used together sequentially.

The symbols are ancient icons, the same as modern icons placed on a computer desk top. Embedded within each icon is a code telling the computer what program to bring up should the icon be used. In a similar manner, when the Reiki Practitioner uses a Reiki symbol, coding embedded within the symbol tell the Reiki what it needs to do.

Three traditional symbols are used by most Reiki Practitioner - Cho Ku Rei, Sei He Ki, and Hon Sha Ze Sho Nen. Reiki Master-Teachers will also use a 4th symbol, the Dai Ko Myo. Finally, there are other non-traditional symbols which have been discovered by practitioners and are used in different schools of Reiki.

Meaning: To Make Straight or Align

Using the Cho Ku Rei for Healing and Cleansing

As the Power Symbol it gives a greater power and focus to the Reiki.

Use the CKR before and after using any other Reiki Symbol to empower it.

Draw the image on either side of a person to help bring their physical, spiritual, emotional, or mental body into balance.

When using the Cho Ku Rei for balancing or if I am wanting to create a spiritual doorway, I will draw two Cho Ku Rei facing each other.

Meaning: I have the key

Using the Sei He Ki for Mental and Emotional Healing

The Sei He Ki can be used any time you believe there to be an emotional or mental component to the problem being treated. This can include those illnesses caused by or worsened by stress, addictions, and past traumatic events.

It is often times used at the beginning of a healing session, then repeated throughout as needed.

I will use the Cho Ku Rei combined with the Sei He Ki to attach messages which the client's inner self needs to hear. To do this, I will mentally attach an affirmation to the SHK, bundle it between two CKR, and send it via a stream of energy through my hands into the other person. 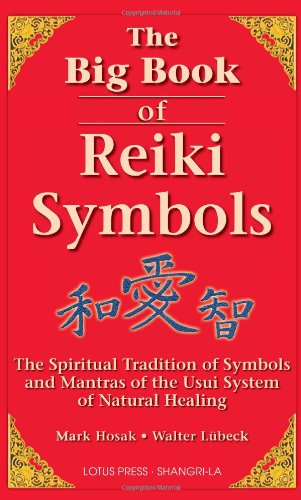 The Big Book of Reiki Symbols: The Spiritual Transition of Symbols and Mantras of the Usui System of Natural Healing
A reader recommended this book to me years ago. It provides indepth information about each of the Reiki symbols as well as meditations which can be used for them.
Buy Now

Meaning: No past, no present, no future

Used for: absentee healing, spanning the distance between time and space

This symbol can be used when doing distance healing work to create a connection between the practitioner and the client. It can also connect the present with the past, or the future and can be used to set healing for clients at times in their past or future. Another use is to access past events to help the client work through them and heal. I have used it as well when working with people who do not tolerate direct contact, such as children with Autistic Spectrum Conditions.

When Doing a Distance Healing:

Should the Reiki Symbols be shared with non-initiated?

There are those who practice Reiki who believe firmly that the Reiki Symbols are Sacred and as such should forever remain secret from the non-initiated. Others are of the opinion that the symbols should be made freely available to all people, regardless.
What do you think?

My thoughts on the matter

It is my view that hiding the Reiki symbols from the uninitiated serves no purpose, not least because images have been available for anyone who cares to look since they were first published in books back in the 1990s.

The power of Reiki does not lie within a few lines drawn on a sheet of paper, or typed onto a computer screen, it lies within the intention of the attuned Reiki practitioner.

Far better, in my mind, that these symbols be made freely available to all, including those who have not been attuned. Because they are just that, symbols, and without the intention from the practitioner in themselves they hold no power.

To put in another way, it doesn't matter how many times I write E=mc2, it doesn't even matter that with a bit of searching, I can tell you that this means Energy = Mass X (Speed of light in a vacuum)2. I still have no understanding of what this actually means, and other than using it as an analogy here, I would have no clue how to apply it in any way.

Used for: Healing the soul, healing the aura, serves to increase intuition and psychic abilities

Using the Master Symbol for Connecting to the Universal Energies

This symbol is used by the Reiki Master to connect to Universal Energies at a higher vibration. By using this symbol, the Master practitioner can attune others in Reiki as well. This could be used for healing karmic ailments, increasing intuitive abilities, and even for mending damage to the aura or soul.

It is used most often during personal meditations and when performing attunements for others.

It can also be used to give an extra boost to energy flow during a healing session.

Activate the symbol by drawing it and mentally or verbally saying the name three times.

These symbols are different from the ones I learned!

The Reiki symbols are a regular part of the Japanese written language. Just as the way you or I write words using these letters differently, words written using the Japanese ideograms will be different due to the differences in people's handwriting.

These are symbols which are used in various schools of Reiki.They are not taught as part of the Usui Shiki Ryoho school which was taught and passed down through Mrs Takata.

This symbol is sometimes taught instead of the traditional Dai Ko Myo. It can be equally as powerful, so use the one which resonates best for you.

This symbol is used in some traditions to cleanse and connect the Chakras.

Used in some traditions to close the connection between Reiki Master and student once the attunements have been given.

This symbol is one that NanLT discovered during a Shamanic Reiki journey.

She is still discovering its full meanings and how to use it. The Hado Nai represents the point between the physical and non-physical/ spirit and non-spirit.

You can read more about this symbol at The Healing Room: The Hado-Nai Reiki Symbol

Each of the traditional Reiki symbol images used here was created by NanLT using PhotoScape.

You can find these images and more at Nan's Zazzle shop.

How do you use the Reiki Symbols?