In my desperation to avoid a painful root canal about six months ago, I asked an Ayurvedic practitioner at the Yantra Foundation in Bangalore for a remedy. He suggested I swish a small amount of gingelly or sunflower oil in my mouth for 20 minutes first thing in the mornings. Within a week, the infection had subsided. In two weeks, I could bite into apples with my front teeth again ( I had weak gums) and my teeth were whiter.

The Charaka Samhita. an Ayurvedic text which dates back to 300 -- 500 CE describes the benefits of oil pulling in Chapter V -78 to 80:

It is beneficial for strength of jaws, depth of voice, flabbiness of face, improving gustatory sensation and good taste for food. One used to this practice never gets dryness of throat, nor do his lips ever get cracked; his teeth will never be carious and will be deep rooted; he will not have any toothache nor will his teeth set on edge by sour intake; his teeth can chew even the hardest eatables.

According to Dr. Deepak Chopra in his book, Perfect Health, Ayurveda suggests oil pulling "to purify the taste-buds and the entire system." The locations of the kidneys, lungs, spleen, liver, heart, pancreas, small intestines, stomach, colon, and spine are all mapped on the tongue. These meridians are stimulated by the oil massage.

This ancient therapy has been tested at the Meenakshi Ammal Dental College and Hospital in Chennai, India. A study revealed that oil pulling is a highly effective way to remove bacteria in the mouth. A marked reduction was seen in Streptococcus mutans, plaque and gingivitis

Rediscovered and Recommended by a Russian Doctor

Oil pulling made a huge comeback in 1992 when Dr. F. Karach, MD spoke about it in a conference of oncologists and bacteriologists in UDSSR. He said: "Most different diseases could be totally cured without medicines or surgery. With pulling oil treatment I have cured my chronic blood disease with which I suffered for 15 years. It healed in 3 days an acute arthritis which made me lie in bed. Pulling Oil heals head-aches, bronchitis, tooth pain, thrombosis, eczema, ulcers and diseases of stomach, intestines, heart, blood, kidney, liver, lungs and woman's diseases. It heals diseases of nerves, paralysis, encephalitis and chronic sleeplessness. It prevents the growth of malignant tumours, cuts and heals them."

Since then, oil pulling has acquired thousands of adherents around the world.

About a couple of years ago, my dentist told me that eventually one of my molars would have to be pulled out. As you know, the impending root canal drove me to oil pulling and as a result this molar was saved but it took about two years of oil pulling.

The tooth suddenly became even more sensitive. So much so that anything hot or cold would set off the pain which would turn into a headache. This happened for about two months, but I continued with the oil pulling, knowing that it would only help. Sure enough, one day it stopped being sensitive and today it shows no signs of wanting out.

Why I Chose Gingelly (Sesame) Oil For Oil Pulling

Well, for one thing, one of the traditionally recommended oils - gingelly oil was cheaper than refined sunflower oil and said to have more benefits.

Try oil pulling. It can't harm you as it has no side effects. It can only benefit you. And do let us know how its going.

The Truth About Oil Pulling

You Can Continue Oil Pulling Daily After 3 Years

My three years of oil pulling are over. Someone who had first mentioned the beneficial effects of oil pulling to me (her grandmother had all her teeth and no illnesses) had told me that oil pulling is done for three years and thereafter once a week is enough, but I find that my sensitive tooth which was meant to go has begun to hurt again after a week.

I called up the doctor who had recommended this wonderful therapy to me. He says I can continue to oil pull every day; it does not have harmful effects. So I'm going back to this daily routine.

UPDATE: In about 5 days, the pain in the doomed tooth is gone. But I do my oil pulling on alternate days and so far the tooth is not protesting.

Disclaimer: The information contained in this article is for educational purposes only and should not be used for diagnosis or to guide treatment without the opinion of a health professional. Any reader who is concerned about his or her health should contact a doctor for advice. 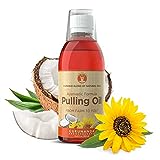