How to Deal With a Partner Who Has High Functioning Autism

Maria is a marketing writer and published author. She writes about topics she is passionate about like mental health, travel and food.

Your Partner has High Functioning Autism. How Does This Affect Your Relationship?

There are many articles written about children with High Functioning Autism; either by those with Autism, parents of children on the Autism spectrum as well as therapists and specialists. These articles all give a wealth of information on the condition and how it affects people who deal with the condition on a daily basis.

When you met your partner everything was wonderful at the beginning, you fell head over heels in love and the honeymoon period was just perfect, but as the relationship develops one partner feels something isn't quite right, a dominant force is taking over and the actual issues become blurred.

Even in relationships where both partners don't have a mental condition, it isn't always smooth sailing. It is important to understand that having a relationship with a person who has HFA, you will need a lot of understanding, nurturing, patience and tolerance. Many relationships don't survive the tough times but there are many that do.

What happens to a relationship when all the nurturing is one-sided? One partner does all the giving to make the relationship work. It's quite a dysfunctional situation and one partner finds themselves exhausted from doing all the emotional work. Can such a relationship survive if the problem is diagnosed? Can change happen for the good of both people involved?

One of the biggest issues of the person's character is the resistance of (or dislike) for change, they can find it difficult to compromise. Change is an uncomfortable thing, they want routine because routine helps to keep them calm. When their significant other insists on change, the person with HFA resists without realising the hurt they cause. 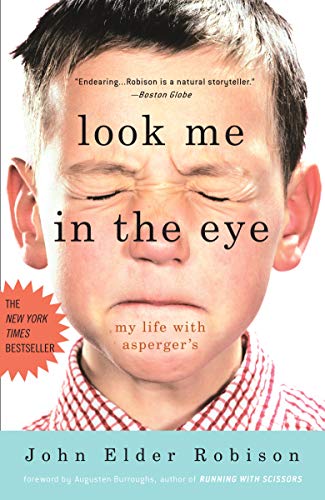 Look Me in the Eye: My Life with Asperger's
See how a diagnosis of High Functioning Autism later in life helps John Robison to understand himself and his relationships. This book helped my partner to understand how I felt.
Buy Now

The feeling of falling in love can be the best feeling in the world and I defy anyone not to enjoy the euphoria that comes with the first taste of being in love. Love develops and changes as a relationship grows but for anyone who has been with a person who has High Functioning Autism, and lived with them for some time, they will know the challenges.

People with HFA have a certain way of looking at life, they tend to worry about things that seem quite trivial to others. These traits tend to become quite ingrained and when and if they do find a partner, they find it difficult to see another way of living. They tend to expect their partner to fit into their life rather than the other way around. They can dominate the relationship in a way that can be quite daunting for someone who wasn't prepared for the obsessive behaviours that accompany this syndrome.

Tantrums, misunderstandings, mood swings and generally non-acceptance of their partner's opinions can be issues being dealt with by partners. Some neurotypical partners say living with their HFA partner can sometimes seem like they are living with a spoilt child who only wants things their way. Frustrations can be a way of life in a relationship of this type, and for many, it is too much to bear and the relationship doesn't last long.

It is unfortunate when breakups happen but they can be avoided if you take the time to learn how to speak to your HFA partner in a way that is not confronting to them, the relationship will be easier on both of you. Once you understand that logic, routine and an orderly life are an HFA person's best friends the relationship will find an even balance that suits both of you.

Tony Attwood and Michelle Garnett present a video about understanding your HFA partner and how to deal with relationship problems. They discuss a variety of issues such as maintaining long term intimacy when feelings are not in tune; dealing with different neurology and personality traits, feelings of one partner always doing the changing; accepting what an HFA brain can achieve when it comes to feelings.

People with HFA are not comfortable discussing feelings, many find it confronting and confusing to see someone crying or reacting angrily towards them. Dealing with their own feelings can also be a challenge, a source of stress for many.

Relationship counselling comes in many forms, however, when dealing with this type of relationship it is advisable to seek psychologists such as Tony Attwood and Michelle Garnett, people who have the expertise of dealing with the issues surrounding Autism.

One of the main issues you need to understand when dealing with a relationship that involves a neurotypical partner and one with HFA is the problems you are experiencing are not ALL due to your partner and their quirks. Try not to put all the blame on them.

If the neurotypical partner can appreciate and accept what an HFA brain is capable of, or more importantly, what is it NOT capable of and learn to speak to their partner with compassion instead of criticism, the relationship may survive. People with HFA do not intentionally set out to hurt their partners, there is no malice in their actions.

This is not to say that the HFA partner doesn't have to bring anything different to the relationship, they have to bend and compromise as well. How far they will go depends on how comfortable they are with change.

For anyone dealing with an HFA partner, it is advisable to seek support from websites such as www.heartsandminds.net and from books specialising in this special type of relationship. Many good books are available from www.jkp.com.

A Parent's Guide to High-Functioning Autism Spectrum Disorder, Second Edition: How to Meet the Challenges and Help Your Child Thrive
Understanding the High Functioning Autistic brain gave me clarity into how my partner thinks. I needed to have a feel for what it was like for him growing up. I recommend this book for parents dealing with a child with HFA.
Buy Now