Vitamin C Filtering Shower-Heads - Are They Any Good?

Always interested in affordable ways to live better, Pollyanna reviews products that she has used to help you decide what's right for you!

Spa on a Budget

I live in an area with hard water. It's a nightmare. Limescale builds up in absolutely everything; from the washing machine to the kitchen fittings. Whilst there are plenty of cleaning products out there to tackle this, the idea of cleaning yourself in this water is a far cry from the spa experience we all long for.

If you're like me and live in a normal town, with little or no access to a spa, you might be wondering what you can do about it. With fantasies of building my own Roman baths, I had to come up with something practical and cheap, to fit reality and my budget!

I was surprised by how one product made such a difference to my bathroom!

I had found that I was prone to getting eczema on my scalp and face - only small patches, but made worse during times of emotional stress, or during periods when I was not getting enough sleep. I had got used to this as being the norm, and have invested in soaps and shampoos that are milder to help prevent a flare-up.

I had noticed that if I was ever on holiday in an area with soft water, my skin problems cleared up and my hair felt softer and was more shiny. I was beginning to realise there was a link here between the hard water that I bathe and shower in, and the health of my skin.

When my current shower head was looking past its best, I decided to invest in a new one. It was by sheer chance that whilst browsing through standard shower-heads, I came upon this product.

Not much more expensive than a standard shower-head, I read about some of the benefits that it claimed which boasted:

Having looked at a couple of other products, I thought that this would be the best of a few for my budget, and with one click, it was in my basket.

The product was with me two days later.

Packaged well, and in a small box, it was good to see that the retailer had not gone over-the-top and wasted materials with ridiculous amounts of excess packaging.

Opening it, I was pleased to see that the shower-head was already pretty much ready to install. The ionizing balls were already in the neck, with the vitamin C filter in the shower head.

All I needed to do was unscrew the shower head cover to take out the vitamin C block and remove a sticker, then put it back together.

The instructions were simple and easy to understand, with illustrations to help me along.

Spares and replacements were included with the shower-head, which included ionizing balls, another vitamin C filter, and some more goodies.

I didn't need to fit a new shower hose as mine is good as it is. So all I had to do was to unscrew my old shower head and screw this on. And voila! It really did take me 5 minutes.

I was excited and a little nervous about using this new shower-head, but the next morning, I gave it a whirl.

The first thing that I noticed was the difference in water pressure. I use an electric shower. The water pressure is really terrible, and I often found that it took quite a long time to rinse all the shampoo and conditioner from my hair.

The pressure from this shower-head was significantly better. When the water hit my skin, it felt like a massage in comparison to the miserable predecessor. The jets are finer, but they do more work. You can feel a mist against your skin where the water hits it; it really is lovely.

The vitamin C block has a pleasant natural lemon scent that is not overpowering. It helped lift my mood and feel fresh, but did not leave me stinking like a citrus fruit when I got out of the shower! Rather, the scent lingers in the shower steam whilst you wash.

Being more efficient thanks to the design of the shower head, it also meant that I used less water than usual, which is always a good thing for my bill and the environment.

Two Weeks On: The Verdict

I am still using and enjoying this shower head.

The only downside that I can think of with this product, is that after you have used it, the water drips through the shower head as it would with any shower. With the vitamin C block in, you end up with a small puddle of yellow below the shower, but this rinses away easily. If it bothers you a lot, you can always remove the vitamin C block entirely - otherwise, leave the shower head resting on the floor of your shower and it won't drip out in that manner.

*IMPORTANT: I'm not claiming that this cures eczema, so please continue with a routine that works for you, and follow your medical advice!

10/10 - I Would Definitely Recommend this Product 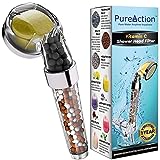 PureAction Vitamin C Shower Head Filter with Hose & Replacement Filters - Hard Water Softener - Chlorine & Fluoride Filter - Water Purifying Filtered Showerhead with Beads - Helps Dry Skin & Hair Loss
Easy to install, pleasant to use, and easy to clean, I am very happy with this product. I have definitely noticed a difference in the condition of my skin and hair since using this shower head and am kicking myself for putting up with the old one for so long!
Buy Now