Waking up screaming... what causes that?

Finding out what causes this has been interesting!

I have been accused of snoring from time to time, I don't know if I do or not, I'm asleep when I'm doing it! After waking up this morning though, I did some research about nightmares and waking up screaming. I found out (and I did NOT know this) that it is impossible to snore and dream at the same time!

I really think my husband would have preferred my snoring this morning to dreaming, because he was downstairs, peacefully having his morning coffee, when I suddenly woke up SCREAMING! I was having a nightmare, and in the nightmare I was screaming, but I did NOT realize that I was actually doing it out loud!

He came running upstairs and asked "What's wrong? You're scaring the crap out of the CATS, they both have puffy tails!" Sorry kitties, Mom had a bad dream/ nightmare! But I have to admit, puffy tails DO look funny on cats!

This only happens to me a couple times a year, AND, only since I passed age 50. I wondered if it has something to do with age... menopause that I've been going through perhaps? Or as Archie Bunker once said to Edith when she was going through "the change"... "When I had a hernia, I didn't make YOU wear the truss, Now if you're gonna have a change of life, you gotta do it right now. I'm gonna give you 30 seconds!"

I found out some interesting things about nightmares, and experiences that others have shared about waking up screaming. I found out that the difference between night terrors and nightmares is this... night terrors will happen early in the night, in the earlier stages of sleep and if you awaken from them, you will probably have no memory of what it was that was giving you the night terror. Now nightmares, on the other hand, will happen early in the morning, usually between 4 and 6 am, which is when mine always happen, and when you wake up you'll usually remember parts of the "dream," or the entire dream, that was terrifying you!

Now my dream this morning, while it did make me wake up screaming, actually had a humorous "bent" to it! I was dreaming that a man was trying to steal my car, he had the hood open for some reason... the car was parked in a covered lot, and I came upon him and startled him. He started to run away and got into a car and was about to drive away when he looked right at me, and I gave him "the finger". I never do this "in real life"... even if I am provoked, I might THINK about doing it, but I would never do it. Why I did it in this dream, I don't know! BUT, it angered him and he came after me and was about to grab me when I started screaming "leave me alone!". Then I woke up to my husband telling me that the cats had puffy tails.

I have had dreams in the past that were not even a little bit humorous, and it seems like I had them when I had been watching too much television news programming. I had a dream (nightmare) when President Obama was first elected that the country was in a war. Not only a civil war, but other countries were coming into the country and attacking us on our shores. Our home was locked up, boarded up, secured as well as we could secure it... but somehow they still got IN. They took my husband and put him on a train.. and all I could think of was that it was like the holocaust... then they tried to take ME next, and I woke up screaming that time, and I was trying to run after the train! Absolutely nothing humorous that time, very scary, I woke up sweating as well as screaming. And, I stopped watching so much television news. I limited myself to an hour a day in the evening.

I have these nightmares it seems a couple times a year, and from the looks of it, other people sometimes have the same problem. That's one of the good things about the Internet, you can find out that you are not alone when something like this happens to you, chances are it has happened to someone else as well.

I found out that there are five stages of sleep, the first stage happens within the first one to seven minutes, when you are drowsy and about to fall asleep and can be easily wakened. The second stage is when it is harder to wake someone, and we spend about 1/2 of our time asleep in this stage. Then come stages three and four when we are in our deepest sleep, our body temperature drops, and our heart and respiratory rates slow down.The final stage is REM sleep, "Rapid Eye Movement" and that is when we dream. If you happen to be a sleepwalker, you will do that during the third and fourth stages of slumber, but the dreaming and nightmares are left for the final stage, REM sleep.

I also found out that if you are suffering from night terrors (early in the night "dreaming" and sleepwalking and/or screaming) it can be caused by a chemical reaction in your brain that causes the brain to "misfire".. in that case, medical treatment may be necessary. In the case of nightmares, there are things you can try.

First of all, don't eat right before going to bed, the food can't digest properly and can interrupt sleep. Sleep in a room that has a good temperature for sleeping, not too hot or too cold. This is fine advice unless you are going through "the change". You try to go to sleep and you are hot.. you fall asleep with no covers on... during the night you become cold, you pull the covers up, then you're hot again... you kick them off... then you're cold again... then your husband wakes up and says "will you make up your MIND.. either you're hot or you're cold"! You laugh and then fall back asleep! (Ok, so that might not be the experience of every woman who has gone through "the change"... but I think there are some out there who can relate!) I think I hear a few husband's laughing as well!

I did read about one lady who had been trying to lose weight and often went to bed hungry, and she was told that she could have been suffering from non-diabetic hypoglycemia. I hadn't even thought of that possibly being related, but then I have recently lost 12 pounds simply by eating less and exercising more (the weight has come off within about a three month period, so pretty slowly). I wondered after I read that, since I did feel hungry before I fell asleep last night, if that could have caused my nightmare. I wasn't going to dare eat anything right before bed, though, so I ignored the hungry feeling, and fell asleep.

One thing that was suggested is something called "lucid dreaming." It happens you realize while you are still partially asleep that you are simply dreaming, and then you try to "control" what you are dreaming. I'm not sure if I can even do this, but it might be worth a try! At least maybe I can learn to keep my "finger" to myself. Ahem...

There are some very common themes in bad dreams, such as falling or flying, being naked, not being prepared to take an exam, and even body parts missing (especially TEETH). Now I have actually HAD that dream, where my teeth began to fall out, Not a good feeling let me tell you! Not pretty, either! Another common theme is chasing or being chased.

I think tonight I'll look at some cute pictures of kittens right before retiring, have a very light snack to keep away that hungry feeling, and try to make the room temperature as comfortable as possible! We'll see what happens! 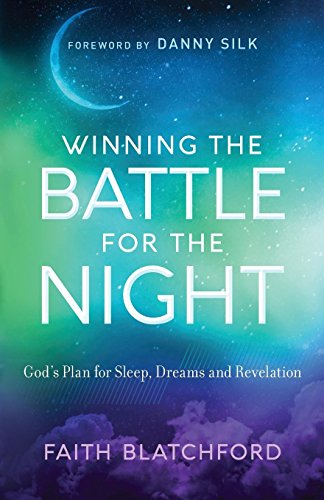 Winning the Battle for the Night
Buy Now