What Are the Anti-Aging Benefits of Taking Fo-Ti Root?

Natural remedies have been a major interest of Kelley's in recent years, and he's also fascinated by unusual food and beverages.

Like many so-called elixirs coming from East Asia and other parts of the world, Fo-Ti Root is another one with many possible benefits, including turning gray hair back to its original color, lightening age spots, rejuvenating sexual vigor and increasing the age span. Could Fo-Ti Root be the fountain of youth for which everyone has been looking?

Please keep reading and find out!

What is Fo-Ti Root?

According to legend, Li Ching-Yuen was a Chinese herbalist who lived to be 256 years old, mainly because he consumed Fo-Ti Root and other herbs such as ginseng on a daily basis. Living in Szechwan Province in rural China, Ching-Yuen also reputedly had great sexual prowess, marrying as many as 24 women (as the story goes, he survived 23 of them). Ching-Yuen was supposedly born in 1677, though no birth records can verify such as a claim. He finally died in 1933.

Interestingly, the world’s oldest human, whose date of birth can be verified, lived to be 122 years of age.

Fo-Ti Root, scientifically known as Polygonum multiflorum (also known as Shou Wu Chih) is an herb that grows in China, Japan, Taiwan and Malaysia. The Fo-Ti bush, which produces very long vines and large leaves, grows along streams in wooded areas and can reach a height of over four meters. The root of the plant is used to make medicine, tea and supplements and is harvested in September and October.

Reportedly, processed Fo-Ti Root works better than the unprocessed kind. Unprocessed Fo-Ti Root can cause gastrointestinal problems and liver damage, and the processed variety is usually more potent, perhaps 12 times as much. Moreover, older roots are considered superior to younger ones, so old roots cost more.

What Are the Benefits of Taking Fo-Ti Root?

According to traditional Chinese medicine, Fo-Ti Root has numerous health benefits. First of all, the plant is rich in zinc, iron and copper, all essential trace minerals for human metabolism. Zinc, in particular, is critically important for reproductive health. Also, the alkaloids in Fo-Ti Root may rejuvenate nerves, brain cells and the endocrine system.

Furthermore, processed Fo-Ti Root contains carbohydrate-binding proteins known as lectins, which can act like antibodies in the blood, reducing fat and helping block the accumulation of plaque in blood vessels. It can also help detoxify the liver, improve the immune system and lower both cholesterol and blood pressure.

Also, as one may have noticed, Fo-Ti roots come in many shapes, some resembling animals or people. Perhaps this is one reason the herb’s medicinal properties are considered so healthy. Who can say, right?

Incidentally, perhaps the best way to take Fo-Ti Root is to make tea with it. But if you do, you may want to add a sweetener to offset its bitter taste. Then you can enjoy the herb's mild sedative and energizing effects.

What about the Anti-Aging Properties of Fo-Ti Root?

Long known as a rejuvenating herbal remedy, Fo-Ti Root reputedly has many age fighting capabilities. Perhaps its most famous one is that its regular use may return gray hair to its original color. According to legend, General He Shou Wu was executed by being imprisoned underground for a year with no food or water. After a year, when the prison guards came to remove the general’s earthly remains, they discovered that the general had survived his execution by eating Fo-Ti Root and that his hair was no longer gray!

Fo-Ti Root may also help grow new hair and strengthen the hair one already has. And, since Fo-Ti Root is considered a yin tonic, taking it may improve the sexual potency of both men and women. This herb may also lighten or remove age spots and other signs of aging in the skin.

Taking this herb may in fact increase one’s age as well. Recent tests show that Fo-Ti Root increases longevity by 12 per cent in animals such as fruit flies and rats. This may happen because Fo-Ti Root seems able to increase the production of antioxidants such superoxide dismutases, which are enzymes that may be the human body’s most powerful antioxidants. As many people may know, antioxidants destroy the free radicals that damage DNA, the main cause of aging.

But, as is the case with many so-called elixirs of life, few if any scientific studies can verify the anti-aging effectiveness of humans ingesting Fo-Ti Root on a regular basis and over a long period of time. Perhaps one day such definitive tests will be performed on human subjects and then we can all read about that.

There are many herbal elixirs available, of course, and many of them reputedly fight aging. But is Fo-Ti Root any different than the rest? Try it and see, what the heck. If it darkens your graying hair and/or grows new hair, it may be worth the cost. And if you live to be older than 200, please send everyone an email ASAP. 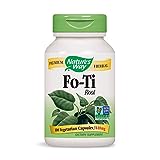