Our guts may hold some valuable insight into our health, more specifically the bacteria residing there. Recently probiotics were considered to be under the umbrella of complementary and alternative medicine only. As our knowledge of the microbial world has expanded, probiotics have rapidly earned their place in mainstream medicine. Recent research is uncovering the many benefits of eating a diet full of these probiotic nutrients. Some cutting edge research is being done on the role these microorganisms have in treating and preventing disease and illness. Some fascinating links have been discovered about the role they have in cancer and even obesity prevention.

What follows is a general discussion on probiotics and probiotic reviews. Bear in mind that there are many types of probiotics, and one size does not fit all when we’re discussing efficacy. In other words, not all species and strains work the same. Most studies focus on a particular probiotic strain or a few strains only, so research conducted on one strain can’t be applied to another strain. For example, just because some Lactobacillus strains have been shown to protect again the development of eczema, doesn’t mean all strains will have the same positive effect. It is prudent to check with the manufacturer or look at the specific culture to determine which strain is being used in any given product. Many health food stores carry probiotic supplements

Probiotic” literally means “for life”.  In 2002 a succinct definition of probiotics was arrived at by a group of experts were convened by the Food and Agriculture Organization:  “"live microorganisms which when administered in adequate amount confer a health benefit on the host.”  Microorgansims are miniscule living organisms like bacteria, yeast and viruses that are only able to been seen under a microscope.  Basically, we have good and bad bacteria and other microorganisms in our bodies, in fact we have 10 times more of these than we do cells that make up our bodies.   We don’t want the bad bacteria, they cause disease and illness in our bodies.  We definitely do want the good bacteria, however.  The more of these good guys we have, the less of the bad ones we have.  The good microbes cooperate with our immune system in keeping the bad microbes under control by basically crowding them out.  The good one keep the bad ones down to a minimum, in other words.  Additionally, they play an important role in both our digestive health and our immune systems

Probiotic Foods and Types of Probiotics?

Most probiotics are bacteria that are similar to what we already have in our guts, in other words the “flora”.  Generally, they come in two groups: Lactobacillus or Bifidobacterium.  To complicate matters, there are different species within these two groups, and within these species there are different varieties or strains.  Not all probiotics are bacteria, a few common ones are actually yeast.

Probiotics are found in foods or can be taken as supplements, in the form of capsules, powders and tablets, primarily.  Examples of foods naturally containing probiotics are:  both fermented and unfermented milk, tofu, yogurt, tempeh, miso, as well as some soy and juice drinks.

When we take a course of antibiotics, we also inadvertently set ourselves up for the undesirable side effect of killing our good bacteria. University of Michigan’s Dr. Gary Huffnagle, PhD, renowned probiotics researcher, stated: “We’re now finding that eliminating all the good microbes from our body results in a weaker immune system, which we believe is leading to problems such as increased incidence of chronic disease, including allergies like asthma.” Some experts recommend taking probiotic supplements or eating foods rich in these microbes in conjunction with antibiotic treatment.

All Your Probiotics Can Be Found on Amazon 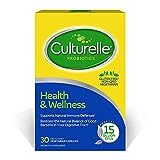 The most substantiated positive health effect of probiotics is their role in treating diarrhea. Not only do they assist in treating the diarrhea associated with antibiotics therapy, but also traveler’s diarrhea and diarrhea from infectious illnesses, particularly those seen in children.

Which Probiotics Have Been Shown to Help Diarrhea?
Lactobacillus rhamnosus GG or Saccharomyces boulardii for diarrhea caused by antibiotics.

Any species or strain of Lactobacillus seems to help with the diarrhea associated with infectious illness, like rotavirus,

The number of allergy sufferers is on the rise in most industrialized nations. An interesting hypothesis called the “hygiene hypothesis” has been proposed by scientists. The hypothesis stemmed from the observation that a lower incidence of allergies occurs in environments with large amounts of microbes. Some examples of these high microbial environments are day care centers, farms, houses with pets and families with multiple children. We think we’re doing our children a service by raising them in these highly clean, environments, right? Well, for atopic dermatitis, this appears to not be the case. Exposure to these microbes before the age of 6 months is most beneficial. One study performed with 132 infants at high risk of developing eczema showed an impressive 50% drop in recurrent atopic eczema with probiotic supplementation.

Which Type Has Shown to be Beneficial in Preventing Against Allergic Atopic Eczema?

Irritable Bowel Syndrome is a functional disorder of the gastrointestinal tract affecting 10 to 20% of the American population. Its exact cause is unknown. It produces significant abdominal distress, irregular bowel movements, with bloating and/or significant flatulence. A double blind, random, controlled study by the University of Michigan showed some very promising results. All 20 of the study participants taking a probiotic showed decreased. Additional studies have shown similar pain relief and diarrhea control through probiotics use.

Which probiotic has been shown to help IBS patients?

Vaginosis has been in the spotlight recently as researchers are now taking a look at its potential role in pelvic inflammatory disease, pregnancy complications, and even increased susceptibility to the AIDS virus. Vaginosis is caused by a number of organisms. It’s been established that lactobacilli are present in large numbers in a healthy vagina. It is thought that they help maintain a healthy acidic ph range to keep unhealthy microorganisms at bay. Studies have shown probiotics use in women can help restore the healthy lactobacilli in women prone to these vaginal infections.

Which Ones Have Been Proven to Help Vaginosis?

Helicobacter pylori (H pylori) is a bacterium that takes unwelcome residence in our stomachs and can cause gastric ulcers. It’s even been implicated in the development of gastric cancer. Study results show that some probiotics can help reduce H pylori numbers.

Humans inability to digest lactose is widespread throughout the world. Lactose intolerance occurs in those lacking adequate lactase, the enzyme responsible for digesting lactose. People experience highly unpleasant symptoms like abdominal pain, bloating, diarrhea, and flatulence. Many lactose intolerant people are better able to digest dairy products that have been fermented, like yogurt. Yogurt contains lactic acid bacteria that actually delivers lactase (the missing enzyme) to the small intestine where it begins breaking down the lactose. In addition to these bacteria naturally found in live yogurt cultures, other probiotics have been shown to aid in the digestion of lactose.

Which Probiotics Can Help Aid in thee Digestion of Lactose?
Lactobacillus bulgaricus and Streptococcus thermophilus

Porbiotics Benefits on the Digestive System

Probiotics Benefits on the Immune System

Certain probiotics have been shown to behave similarly to the natural biochemical, cellular and antibody functions in our immune systems. Some human studies have shown that yogurt, lactic acid bacteria, can actually increase certain immune system cells, in particular macrophages and lymphocytes. These study results show probiotics can be a useful tool in boosting the human immune system. This has far reaching implications for diseases such as AIDS, cancer, and leukemia as well as autoimmune diseases, like rheumatoid arthritis, inflammatory bowel diseases and arthritis, where the immune system is misdirected.

Probiotics Benefits in the Protection From Obesity

An emerging field of study, certainly still in its infancy, is the possible link between probiotics and obesity.  It’s been known for quite a while that probiotics and the healthy gut flora play an important role in metabolism.  Agriculturist have noted that sick livestock gain weight when they’re being dosed with antibiotics, basically their metabolism is being altered.  More research needs to be done in this area, but experts are hypothesizing that humans hold onto fat when they’re taking antibiotics.  So, potentially ingesting more probiotic foods or taking probiotic supplements could have a positive effect upon metabolism.

A classic example of a probiotic food is Dannon’s Activia.  In probiotic foods, the bacteria (or in some cases yeast) may have been added, or they were there originally.  All yogurt has starter bacterial cultures called  Lactobacillus bulgaricus and Streptococcus thermophilus.  Activia has an added probiotic called Bifidobacterium animalis DN-173 010.  In the United States, Dannon has trademarked this probiotic by naming it Bifidus Regularis.  It’s a hearty strain that’s able to successfully survive the harsh environment of our digestive tract.  Dannon’s claims Activia helps with constipation by speeding the journey your food makes through the digestive system.

Most studies on Bifidus Regularis have had a high degree of involvement by Dannon itself, something the company has been criticized for.  Results haven’t provided the definitive proof necessary to make a solid recommendation for its claim to assist in digestive irregularity, however

Probiotic Side Effects and Risks

Some probiotics have a long history of human consumption without all ill effects.  However, more research needs to be done to determine long term safety, especially in vulnerable groups like the elderly, children and immuno-compromised people.  Any known side effects tend to be digestive and mild such as bloating or gas.  Some theorize probiotics could cause an infection that need to be treated with antibiotics.  Some experts claim the biggest risk is whether or not the probiotic you’re taking is actually having any effect at all.