What is Monk Fruit Sweetener?

I'm a digital content creator whose goal is to create content that helps people enhance their lives.

The monk fruit is a smallish, round fruit, notable for its sweet flavor. The fruit can be traced back to 13th Century Chinese monks, but due to the difficulty involved with its cultivation, it did not become a popular part of the tradition of Chinese herbs. The Vietnamese call the fruit, lan ha qua or Buddha fruit, and it is also referred to as one of the many varieties of longevity fruits.

One of the largest distributors of monk fruit sweetener, is a company called, Lakanto. Lakanto's parent company is Saraya Co. LTD, and its president, Yusuke Saraya, is a man who is passionate about health and the environment, and he has a firm belief in sustainability and globalization. Lankanto grows and processes its monk fruit sweetener in a sustainable manner, even down to operating a zero emissions processing plant.

Because the monks who originally cultivated the monk fruit were considered to be healers, and because of it's sweet taste and low carb count, the fruit is widely used as a mechanism to cure people of their addiction to sugar.

Is Monk Fruit Good for Diabetics?

The fruit contains 25 to 38% of carbohydrates (carbs), and its absense of fruit sugar or common sugar, may make it an ideal sweetner for diabetics. It also may be perfect for people who are struggling with pre diabetes, and who do not want to their condition to transition to full blown type 2 diabetes..

Unlike most fruit, whose sweetness is derived from the sugars fructose and sucrose, the monk fruit obtains its sweet flavor from antioxidants; these antioxidants are known as mogrosides. The human body processes mogrosides in a different manner from actual sugar, so the monk fruit sweetener has a zero Gylcemic index and zero calories.

It is important to note, however, that for whatever reasons, the American Diabetes Association (ADA) does not support the idea that low-carb diets reverse diabetes. Many leading health experts, including physicians who treat the disease, like Dr. Joel Fuhrman, stand firm with the studies and have claimed to have reversed the disease in many of their patients.

In any event, monk fruit sweetener does not cause a spike in blood sugar level and it does not lead to excess weight gain, and those are two extremely positive benefits for anyone struggling with diabetes.

What Does Monk Fruit Sweetener Taste Like Compared to Major Sugar Substitute Brands?

As for the the taste of monk fruit sweetener, I would say it tastes sweeter than sugar, so you have to use far less of it than normal, and the aftertaste is minimal. I have tried other sweeteners where the aftertaste is so bitter until I usually prefer to forgo any sort of sweetener at all.

I will say that there seems to be a current obsession with Stevia. I have tried Stevia and the aftertaste is bitter, distinct, and very off-putting. The sweetener brand known as Equal, contains aspartame and Sweet 'N Low, contains saccharin, both of these sugar substitutes leave a bitter aftertaste as well, and there are health controversies involved with each of them.

The other major sweetener brand, known as Splenda, has less of an aftertaste than Equal and Sweet 'N Low, however, some studies have also linked it to health problems. Monk fruit sweetener has not been linked to any negative health issues thus far.

What is Your Favorite Sugar Substitute

Can You Cook With Monk Fruit?

Monk fruit sweetener is 200 to 300 times sweeter than sugar. It is heat stable and it can be used in cooking and baking, but since it is so much sweeter than sugar, a 1-to-1 substitution is generally not recommended. The sweetener can be substituted for sugar in recipes for sauces, dressings, and beverages.

An exception to the general 1-to-1 rule, is the monk fruit sweetener made by Lankato, the company mentioned above. Because their sweeteners are not made from 100% monk fruit, it can be used on a 1-to-1 sugar ratio. 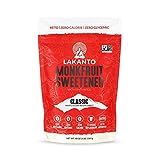