What Is Polycystic Ovary Syndrome (PCOS)

Polycystic ovary syndrome (PCOS) is not a condition the average teenage girl would usually consider as they struggle with irregular menstrual periods and problems with body image. After all, puppy fat, zits and even period problems are synonymous with hormonal adolescent girls. But these symptoms should not be ignored.

PCOS can affect girls as young as 11 years old if the condition is not diagnosed and remain untreated; it can lead to serious problems in later life.

The ability to have children normally is something most women take for granted. From the first doll, her first menstrual period, her first love, there is an expectation that one day the little girl will grow into a woman and mother to have and to nurture children of her own. It's the way of nature; procreation is how the human race survives.

However; for a large number of women, this miracle of life can be an elusive dream. Around 1 in 10 women of childbearing age experience infertility due to Polycystic ovary syndrome. The symptoms of PCOS can be devastating for women with the condition.

Polycystic ovary syndrome was first reported by American gynaecologists Irving F Stein and Michael L. Leventhal and was once known as Stein-Leventhal Syndrome.

PCOS is one of the most common endocrine disorders affecting how the ovaries function. While the causes of PCOS is not completely understood, there is strong evidence that the condition may be an inherited genetic disorder. Women whose mother or sister have PCOS are more likely to have the condition.

The main underlying problem in women with PCOS is a hormonal imbalance. The ovaries produce estrogen, progesterone and androgen to regulate the menstrual cycle and ovulation.

In women with PCOS, the ovaries make more androgen than normal. Although both sexes produce androgen hormone, referred to as "male hormone" it is generally produced in different quantities.

PCOS is believed to be one of the leading causes of female subfertility, (the inability to conceive over a particular period). The condition currently affects millions of women of childbearing age, producing symptoms in around 5 to 10 percent of women in this group. As many as 5 million women in the US may have PCOS. The condition can affect the hormone levels, menstrual cycle, fertility, appearance and long-term health.

Females with PCOS usually begin to notice the symptoms during their late teens or early twenties, and may include the following:

The word ovary comes from the Latin ovarium meaning “egg or nut.”

The ovaries have two primary functions, they make female sex hormones to control reproduction and sexual development, and they produce mature eggs.

Ovaries are ductless reproductive glands in which the female gamete or reproductive cells are produced and stored. They are glands of the endocrine system that produce and secrete hormone directly into the bloodstream. Ovaries consists of two small almond-shaped organs about the size of large olives, they are attached to the uterus one on each side close to the fallopian tube in the lower abdomen. Ovaries are filled with follicles (fluid-fill sacs) where the egg or female gamete cell grows and matures

Scientists believe that women are born with their lifetime supply of gametes. The typical female ovaries are said to contain around 1 to 2 million eggs at birth. However; there is a continuous decline in the total amount of eggs produced each month. By the time a girl reaches puberty, only around 25% of her lifetime total pool of eggs remains, approximately 300,000. The number of eggs continues to drop, depleting the entire egg supply over the next 30 to 40 years, or the onset of the menopause.

Inside the ovaries are follicles, each follicle contains one immature egg surrounded by hundreds of other follicle cells. Each month during ovulation a follicle in one ovary releases a single mature egg for possible fertilization. If the follicle fails to break open to release an egg, fluids remain in the follicle to form what is known as a follicular cyst.

Ovulation occurs in response to hormones. Growth and development of the follicles are driven by two gonadotrophic hormones called Luteinizing hormone or LH, and Follicle Stimulating Hormone (FSH).

The tiny pituitary gland at the base of the brain produces LH and FSH, which stimulate the follicle to grow and produce the two primary female sex hormones, estrogen, and progesterone.

Estrogen and progesterone are steroids that bind to receptors in the nuclei of cells to affect their behaviour. Both these hormones swing dramatically across the female's menstrual cycle. The part of the cycle leading up to ovulation is known as the follicular phase, characterized by an initial rise in FSH and LH in response to gonadotropic releasing hormone (GnRH) by the hypothalamus. The growth of the ovarian follicle last about 14 days and ends just before ovulation.

As the estrogen levels in the blood increases, the hormone exerts a positive effect on the pituitary, causing it to respond by releasing small quantities of LH. The hormone stimulates follicle cells to make small amounts of the progesterone necessary for ovulation.

Androgen is the generic term given to any hormone that directly or indirectly produces male characteristic as seen in women with PCOS.

The principal androgen hormone in the body is testosterone, but other hormones that can easily be converted to testosterone are also available.

There are three sources of androgen in women, the ovary, the adrenal gland and the body fat. The body fat is highly significant in women with PCOS who are also overweight.

Androgen is critical in the ovulatory process. In normal ovulation, androstenedione is produced in the ovarian cells that surround the developing follicle before moving to the cells of the follicles itself. Once there, it is converted to estradiol, the predominant sex hormone found in the female.

In women with PCOS, the ovarian cells around the follicle produce an excess of androstenedione. If the follicle fails to develop normally, the androstenedione cannot be converted into estradiol. Instead, the body will respond by converting the androstenedione into testosterone, which then locks the women into a vicious cycle. If she fails to ovulate or do not ovulate properly, she will begin to produce excess androgen that blocks the ovulatory process becoming a self-perpetuating process. 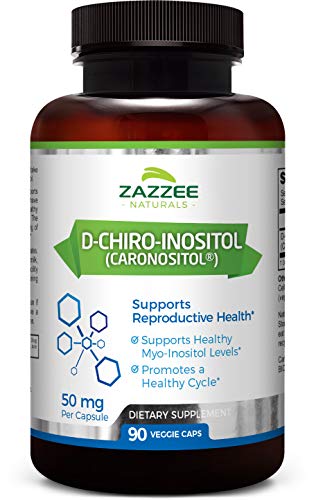 There is no real cure for polycystic ovary syndrome, but the symptoms can be managed. Lifestyle changes are often recommended by doctors and healthcare professionals.

Many women with the condition have found that a combination of treatments helps, certain lifestyle changes, traditional medication and or herbal supplements can contribute to relieving the symptoms of PCOS. Women may respond differently to treatment, something that works well for some women may not function as well for others, but lifestyle changes like diet and exercise can make a huge difference. Treatment for PCOS include:

Regular exercise in conjunction with a healthy weight loss diet, this is one of the most effective means of improving PCOS symptoms particularly in women who are obese or overweight.

Natural Remedies like D-chiro-inositol or DCI found in buckwheat have been shown to reduce the concentration of insulin and levels of androgen circulating in the blood to relieve symptoms of PCOS. See table below for more Natural remedies to relieve the symptoms of PCOS.

For irregular and or absent periods, the oral contraceptive pill is probably the most commonly prescribed medication. However; while the pill helps to induce regular menstrual cycle, it is not the answer for women who are trying to conceive. Progesterone tablets can also be given regularly or intermittently.

Most women with PCOS can become pregnant with treatment. The first line of medical treatment is with drugs that enable ovulation such as:

Metformin works by suppressing the production of glucose by the liver and is commonly used in the treatment of type 2 diabetes, it is also found to be useful in inducing ovulation in women with infertility due to PCOS. Clomifene, a selective estrogen receptor modulator is also offered to women with PCOS, women are offered one of the drugs or a combination of both. Individuals who fail to conceive despite taking metformin and clomifene may be offered gonadotrophins, a fertility drug containing follicle stimulating hormone (FSH). However; there is a risk of hyperstimulation of the ovaries, with this drug that can lead to multiple pregnancies.

Laparoscopic ovarian drilling is more of a last resort; it is a surgical procedure that is sometimes performed to trigger ovulation in women with PCOS. The procedure uses electrocautery ( direct or alternating current is passed through an electrode to generate heat), laser or biopsy needles to destroy part of the ovaries to restore regular ovulation cycles.

Studies done on D-chiro-Inositol (DCI) also referred to as Isomers found in buckwheat farinetta and available as a nutrient supplement showed that women with PCOS, who were given DCI experience significant benefits when compared to controlled group.

Consult Your Doctor, Gynaecologist or Endocrinologist

Minimize the symptoms of PCOS by eating healthy foods

8 Steps to Reverse Your PCOS: A Proven Program to Reset Your Hormones, Repair Your Metabolism, and Restore Your Fertility
Buy Now