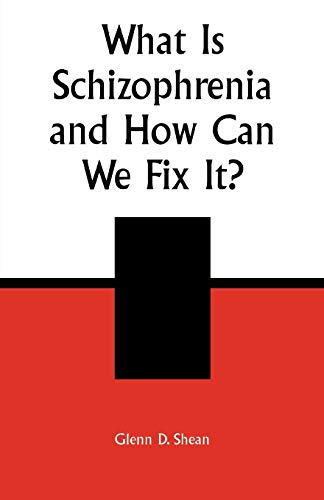 What is Schizophrenia and How Can We Fix It?
Buy Now

About one person in 100, in any culture for which figures are known, will develop the disorder of schizophrenia. The present-day upsurge of interest in it can be ascribed partly to the writings of R. D. Laing, who claimed that the schizophrenic reaction was the only sane way of dealing with an insane world. It was the rest of us, with our adjustment to the craziness of life, who were mad.

Whatever the merits of Laing's theories, the description of the condition is not in dispute. The schizophrenic's way of thinking characteristically does not match up with the reality that the rest of us know. Disordered perceptions and emotions mean that he or she receives quite different messages from the environment- and responds in what appear to be quite inappropriate ways. Extreme withdrawal is a common feature of schizophrenia.

Schizophrenics themselves have vividly described the perception-thought disorder experience: 'It's like trying to get somewhere but inevitably setting off in the wrong direction— and being led along side paths by the myriad different associations that come to mind from every word or object,' said one.

Types of schizophrenia range from the simple, with less obvious symptoms and a gradual withdrawal from people, to the 'silliness', and giggling, regressed mannerisms of the hebephrenic. A paranoid schizophrenic usually has persecutory or grandiose delusions and hallucinations and is frequently aggressive and hostile. Catatonic schizophrenia is characterized either by the assumption of fixed postures—trances—for hours on end, or excessive—sometimes violent—activity and excitement.

The origins of psychotic behavior are still not clear to researchers, who are continuing their search for causes—and cures. Present-day researchers favor the view that many factors, genetic, biochemical, neurological and environmental, contribute to the cause of a psychotic illness such as schizophrenia.