How Does Popcorn Pops? Parts and Structure of Corn Kernel.

From toddlers to old everyone loves popcorn. If popcorn is measured in liters then Americans alone consume 10 billion liters every year. How does an unappetizing kernel of corn become so delectable within two minutes or so? Starchy interior of kernel and properties of water and gases are responsible for popping out the corn.

Kernel of the corn is made up of three parts hull (pericarp), starchy interior (endosperm) and an embryo plant. Endosperm acts as food for embryo when it germinates.

Popcorns are generally oil popped or air popped, when kernels are placed into heated oil or hot-air popper water inside the kernel gets super-heated and temperature rises above boiling point of water. But because of hard and stiff kernel water can't evaporate, and fast moving water molecules increase pressure inside kernel from 100 kPa to 900 kPa, under such tremendous pressure water penetrates starch structure. Further increase in pressure ruptures the hard hull of kernel. The pressure surrounding the starch then greatly reduced instantly to 100 kPa (atmospheric pressure), this reduction in pressure allows water to evaporate and expand as Boyle's law suggest. This change causes starch in the kernel to expand 30 times its original size. this change is so fast that it makes kernel to explode or pop.

Concerning these facts its necessary to store unpopped kernels in airtight container, if kernels are kept uncovered for a day in a dry climate, they can lose 1% of moisture and if it loses 3% or more it will not pop!

Must Watch Only One Minute.

Another interesting fact about popcorn is it has two types of flakes (kernel after popping), butterfly and mushroom. Picture on the right side explains clearly the reason for such naming. Butterfly flakes are soft and quality to melt-in-your-mouth and mushroom flakes are stiffer and hull is more noticeable. Two kernels from the same cob can have two different flakes but latest biotechnology has provided us with hybrid which can produce 100% butterfly flakes of 100% mushroom flakes.

Popped popcorn has been found in 'bat cave' which was occupied 3 thousand years ago by humans practicing primitive agriculture techniques. This suggests that popcorn is not recent discovery however until 1880's popcorn was not out in the streets; they were confined to houses and families. Then Iowa was the first company to pop out their products of popcorn named 'big buster' and 'little buster'

Charles Cretors is credited for the invention of popcorn maker, originally popcorns were popped on open flame, and wire basket filled with raw kernel was held and shook over it. The result was uneven, dry and half popped corns, and sometimes it would turn black. Charles' machine was first device which popped the corns evenly in short time.

Then new types of devices were made on this base. Machines for commercial use as well as homes were developed. Instruments and parts were added which protects popped corns from turning black.

Air and oil are two different modes which heat the kernel till it pops, that's why two different mechanisms is needed to produce air popped and oil popped corns. 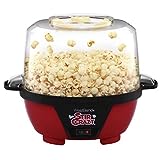 Microwave radiation interacts with every dipole molecules (molecules with negative and positive separate charge). Water is also a dipole molecule and thus interacts with microwave radiation and vibrates approximately with frequency of the waves. When corns are microwaved the water inside the kernel gets super-heated and the popcorn pops as described above. The novelty in this process is that we have not used either oil or hot air to pop the kernel.

Popcorn balls are sweet and sometimes salty, and different regions have their own recopies for these tasty balls. Speaking in Indian style they are a type of 'popcorn ladoo'.

There is a well known story about popcorn balls, God knows better. In very unusual climate one farm in Nebraska was flushed with heavy rains in which sugarcane were grown and the farm was on a height, below in the valley scorching sun was shining which popped the corn kernels in the maize field. Sugar syrup from the height came down in corn field and formed great popcorn balls. Unfortunately these balls were eaten by grasshoppers. This happened on July 21, 1874(Year of the Striped Weather).