Turkey tail mushrooms are named because they resemble the raised tail feathers of a turkey. These fungi, found on fallen logs and tree stumps, grow throughout the world.

They are inexpensive and readily available They thrive under cultivated conditions, as well as in the wild.

Lately, it's become apparent these mushrooms may be able to save lives. Taken orally, they are potent cancer fighters. They also don't cause the debilitating side effects associated with conventional therapy.

Turkey tails have another thing going for them that most alternative treatments do not. A few mainstream doctors now accept them as legitimate, provided a patient undergoes standard treatments first. So these mushrooms, right now, are partially sanctioned by the medical establishment.

This may not seem like a big deal. But it is. Oftentimes, even dying patients are discouraged from doing anything their medical providers considers "unproven." Sadly, this typically happens even after it's clear modern medicine has failed, and it's clear that mainstream oncologists have nothing else to offer, except, perhaps, a recommendation to get on hospice care.

Thoroughly beaten down by their illness, many patients apparently assume there's nothing more that can be done. So they, and their loved ones, stop looking for solutions and accept the inevitable.

Now, though, there's new research that's difficult to ignore. One NIH funded study explored turkey tail's role in an adjunct treatment for breast cancer. The results are highly encouraging. Other research is now underway to see if they have a similar effect on different types of tumors.

In at least one case, an elderly woman considered to have "terminal" cancer, and given less than three months to live, made a dramatic recovery. (You can see her in a video testimonial toward the end of this article.)

The Mushrooms Resemble a Turkey Tail

Many people question the "wisdom" of subjecting cancer patients to chemotherapy. These drugs are extremely toxic, causing hair loss, as well as potentially life-threatening complications. More disturbing is that this treatment may actually spur the growth of tumors, something alternative medical practitioners have long realized.

Lately, some mainstream doctors are starting to agree, especially after a study published in the medical journal Nature outlined one mechanism by which this could happen. The authors, from the Fred Hutchinson Cancer Research Center in Seattle, found that the chemotherapy increases a substance in the body that helps cancer cells grow. Unfortunately, the surviving cancer cells also become stronger and less likely to be killed by future conventional treatments.

A New Way of Looking at Cancer

The vast majority of patients hit with a cancer diagnosis opt for surgery, chemotherapy and/or radiation.

They may doubt alternative treatments are highly effective. It takes a great leap of faith to believe that certain over-the-counter items may be superior to expensive drugs dispensed at a major medical center, especially if family and friends are urging them to "fight" their illness.

Other patients might feel it's better to wait until after they've finished chemotherapy to embark upon alternative treatments. However, by then, they're often so sick that holistic methods, even those with a good track record may be of little avail.

They may also have false hope, despite the well-known fact that chemotherapy is largely ineffective against metastatic cancer. Oncologists give these drugs to Stage IV patients, not with the intention of curing them, but, rather, in hopes of short-term symptom relief. The ethics of this approach are currently a matter of great debate.

Unfortunately, given the fact that cancer will kill more than 575,000 Americans this year alone, it's safe to say much better (non-toxic and more effective) treatments are desperately needed right now.

Some of the best alternative treatments for cancer, now in existence, are described in Cancer: Step Outside the Box, written by Ty Bollinger.

Natural Cures They Don't Want You to Know About

Cancer: Natural Cures: "They don't want you to know about!"
Buy Now

The scientific name for "turkey tail" is trametes versicolor. It's named because the mushrooms may take on a wide range of hues (versicolor). They grow readily on fallen trees, and are among the most common mushrooms in the world.

These fungi have been part of the traditional Chinese medicine repertoire for thousands of years. In recent years, the National Institutes of Health has funded two separate studies. One was to see if these mushrooms can be used as an adjunct treatment for breast cancer patients undergoing chemotherapy and radiation.

Women who took the turkey tail demonstrated higher levels of natural killer cells, compared to those in the control group, who took a placebo. It was also found that the group of women taking the highest dose showed the most immune system recovery.

All of the patients had undergone conventional treatments, which depress the immune system.

The study published in the ISRN Oncology Journal demonstrated that turkey tails had a powerful and beneficial effect on the levels of natural killer cells and CD8+T cells, which are needed to combat developing malignancies.

The Formula Used in the NIH Study 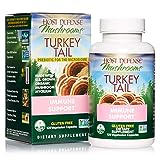 But Can Turkey Tail Mushrooms Save Lives?

Yes, if you ask mycologist Paul Stamets. (His area of research is fungi.) He has been at the forefront of efforts to have controlled, double-blind studies conducted on these mushrooms.

This is primarily because his elderly mother was diagnosed with a large breast tumor in 2009. Her prognosis was very bleak, given her age, the size of her malignancy and the fact it had already spread throughout her chest wall.

Basically, she was told the get her affairs in order. Instead, she started taking natural turkey tail mushrooms. Afterwards, she showed no signs of cancer. She also took the drugs taxol and Herceptin.

In the video on the right, you can see Stamets telling a group of people about his mother's recovery. His mother also walks on the stage toward the end of the video.

The video is very powerful and convincing. Many alternative practitioners, however, would take issue with Stamets' endorsement of taxol, as it can cause serious side effects.

Why Turkey Tails May Bring Hope to Desperate Cancer Patients

Many people diagnosed with cancer are afraid of alternative medicine. For whatever reason, they are reluctant to seek opinions outside of a mainstream medicine center. It does take a certain mindset to reject insurance-covered treatments considered by oncologists to be "proven," despite the fact they often don't work.

This article is written for educational and information reasons only, and the author is not a medical professional. People with health concerns should discuss them with a licensed practitioner. The author is not responsible for treatment decisions or outcome. Women who are pregnant or nursing should not take herbal remedies unless directed to do so by a healthcare professional.