Rebecca loves sharing what she knows about alternative medicine, health, frugal living, fun, animals, and how to live a better life!

Is urine meant to be in the toilet?

I'm all for alternative health remedies and naturally keeping your body in balance. But sometimes you gotta draw the line. The therapy I'm about to discuss is one of those therapies that I believe borders the line of mental illness. But as I started my research, it could be possible I'm mistaken and there is something to this. However, when I first heard of it, it made me absolutely sick and I gagged. To me, there is a reason our bodies eliminate urine, it's waste. If it was meant to stay in, we probably would not pee. Are you brave enough to try this therapy? I'm not sure I am. I can say with 100% certainty though, that I will never drink my own urine. Call me narrow-minded! I suppose this is another example of nature providing all we need for maximum health?

What is Urine Therapy?

The use of urine for health purposes has been traced back to societies in ancient Egypt, China, Hindu, and Aztec histories. Some people even proclaim that a prominent verse in the Bible: “Drink water from thine own cistern and the streams of thine own well.” promotes this type of therapy.

Urine therapy is an alternative form of medicine, also known as Urotherapy, and amaroli which is an integral part of the Ayurvedic tradition of Yoga. This type of therapy is the act of using one's own urine on the skin (topically), for skin benefits, and using urine internally (yes drinking your own piss!) to improve your health.

There have been no concrete facts or evidence that support this as being beneficial to your health, well...none that I could find anyhow. What I mean by that is no proof that this therapy cures the ailments it claims to. Although, apparently it's more popular and common than one would think.

Have you ever tried it?

Have you ever tried Urine Therapy?

My initial thought here is...drink some water and take a vitamin supplement and call it a day. But hey, what do I know?

Urea, the chemical after which urine is named, can become poisonous when present in the blood. However, "experts" claim this to be irrelevant because it is not immediately put back in the bloodstream. They say in small quantities that it purifies, and clears up excess mucus. Also that it is completely sterile after eliminated from the body and that it has antiseptic value. Which is not true. Urine is sterile only until it reaches the urethra, at this juncture epithelial cells lining the urethra contaminate it with gram-negative bacteria. Urine also can acquire foul stinking odors due to bacterial action, particularly with the release of ammonia from urea breaking down.

I'll admit, I've done some strange things, but I've never drunk my own urine, nor have I rubbed it all over my body. Who wants to smell like piss all day long? Yuck.

Read more about it 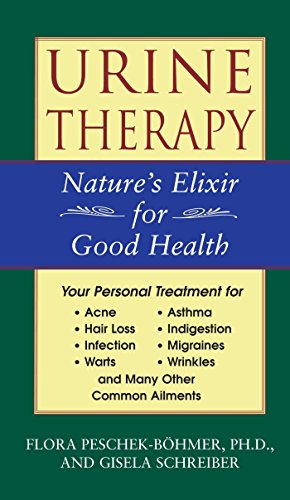 So what benefits are mentioned by incorporating this to your natural remedy cures?

Here are the claims of Urine therapy, nature's elixir...

Only use urine from the first pee of the day and the mid-stream urine is the best sample. Before collecting anything wash your genital area thoroughly. If taking internally avoid eating anything for at least 30 minutes.

Never inject it into your body. A gradual introduction of urine into the body is supposed to be the key here, a sudden onslaught of urine to the bloodstream can cause damage.

After reading this article, are you going to try this?