Where is the FDA?

My husband, the chef in our household, is currently in culinary school and shared an assignment with me last week - a review of Robert Kenner’s Emmy Award winning, 2008 documentary, Food, Inc. Normally we enjoy watching documentaries together, so I was totally game; little did I know that this film would change our lives. Food, Inc. examines the food industry in America and exposes the legally questionable and predatory practices of the corporations that mass-produce agricultural goods as well as fast food in the United States. The documentary also reveals how unregulated industry has impacted labor and immigration laws in the U.S.; while undocumented workers are prosecuted by the State for working in the country illegally, the firms that employ them go unpunished, and are free to continually attract evermore illegal immigrants through our borders. From genetically enhanced livestock to genetically modified seeds, the government is actively allowing corporations to put profit before the health of their consumers, the safety of the environment, and the laws of the United States.

Although I was already somewhat aware of the poor quality of most food, especially processed food and that of chain restaurants like McDonald’s and Applebee’s, I was shocked to learn about the way in which the chicken industry operates. I always considered chicken meat to be relatively healthy, even if we didn’t always purchase organic or “free range” birds, as they are smaller in size than Perdue chickens and are also much more expensive. However, I now know that the way farmers get those chickens to grow poses a real health threat to consumers. I couldn’t believe the condition in the chicken coops of the major growers; crowded and unsanitary, and sadly, the animals live in the dark until the day they are slaughtered. The fact that it once took farmers 3 months to grow a chicken for slaughter, but that now it only takes 45 days to grow a chicken twice the normal size, really disgusted me. Oftentimes when we cooked chicken at home, we found that some drumsticks came already broken, which used to confuse us; but after watching Food, Inc., we realized it was because although its mass grew quickly, the chicken’s bones were not fully developed and were therefore unable to sustain its weight. The thought of that is repulsive. Even more repulsive is the fact that American farmers would be willing to keep these policies secret from the public, that they’d be willing to endanger the health of other Americans for a meager profit. If it hadn’t been for one farmer's courage to expose the truth and allow the documentarian access to her facilities, we may never have known how bad the situation truly is.

The Classic That Exposed It All: 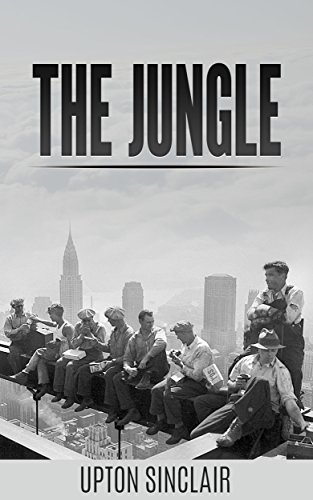 Another alarming fact gleaned from the documentary was the unsanitary conditions in the beef and pork slaughterhouses. The methods of butchering weren’t specified; however, the film revealed that the meat is oftentimes contaminated with feces and is rarely cleaned properly. The meat is so toxic, that workers in the slaughterhouses tend to lose their nails and contract skin disorders from the constant contact with polluted meat. To make matters worse, because cows are not able to digest the corn that they are fed they become infected with E.Coli 0157:H7, which contaminates the meat that we later consume. Instead of simply changing their diets from corn back to grass and therefore eliminating the bacteria from American beef, the corporations that run the meat industry opt to add ammonia to the meat in order to kill the bacteria, instead. That the government allows this lunacy is beyond the pale; that the FDA doesn’t do its job although we continue to pay for it is infuriating. It is obvious that the government is failing to regulate business and protect the safety of the American people.

The Truth About GMOs

Seeds of Deception: Exposing Industry and Government Lies About the Safety of the Genetically Engineered Foods You're Eating
Buy Now

The Monsanto Company and GMOs

The third heinous thing I learned about the food industry from the documentary has to do with patents and seeds. Founded in 1901, the Monsanto Company, a publicly traded American multinational agrochemical and agricultural biotechnology corporation, was given the right to “patent life” in 2001 when outraged American farmers brought a case against them to the Supreme Court. Farmers in the U.S. are basically forced to purchase Monsanto’s RoundUp Ready genetically modified soybean seeds because if they don’t, Monsanto goes after them in court for contaminating nearby crops of their product. Once the farmer purchases the seeds, he is not allowed to clean them for re-planting, because it goes against Monsanto’s patent on the seeds; the farmer is forced to purchase seeds from Monsanto indefinitely, or face losing his livelihood. Monsanto countered that patent law allows protection over modified seeds since 1930, but of course they fail to concede that in 1930, farmers had a choice as to what seeds they could purchase - today, Monsanto has monopolized the entire industry. There are no “public seeds” anymore, and any one interested in farming will have to do so with the blessing of the Monsanto Company. The U.S. government not only turns a blind eye to this blatant disregard for anti-trust laws, it encourages it. On March 26, 2013, Appropriations Act H.R. 933 passed with bi-partisan support and was signed into law by President Barak Obama, which allows the Monsanto Company to operate with impunity, and bars federal courts from the ability to halt the sale or planting of genetically engineered seeds, even if they cause health issues in the future. There are no words that could adequately describe this immense failure of government, as it is beyond all logic. Monsanto is currently fighting a bill that would require all genetically modified food to be labeled as such; it is obvious that if the American consumer is to be protected, it will be up to the American VOTER to ensure it.

So, what changes did the documentary inspire me to make? Well, my husband and I do not often eat processed food and we rarely eat fast food; also, we never eat pork, so we’re ok as far as that goes. However, we are slowly switching to fully organic meat and food products, doing our research and avoiding big name "organic" brands, as we now know that they are often bought out by big corporations that hide their practices behind the “organic” label. We've found that local farmers and small firms keep the integrity of their products intact, like the owner of Polyface Farms who was showcased in Food, Inc., and who refuses to expand his business as it will force him to abandon his clean farming practices and his belief that food should firstly be healthy before it is profitable.

How Did YOUR Representative Vote on HR 933?

It's Up to You

Kenner’s Food, Inc. is indispensable; the urgency of its message cannot be argued against. If it were up to me, the documentary would be shown at every public high school and state-run college in the nation in the hopes that it will begin to wake Americans up to the realities of the health threats we face at the hands of the food industry. Corporations wouldn’t be able to sell their harmful products if consumers knew better and exercised their options, and ultimately, this is where change will be affected - from the ground up. If American voters held their representatives responsible for bills such as H.R. 933, perhaps we would begin to see the improvements that the documentary promises are possible when consumers and voters work together to make them happen.