Enda offers some great advice on buying gifts for men. Here he offers a range of great gift ideas for the man who has everything.

What Is A Good Retirement Gift For A Man?

Finding the best retirement gifts for men isn't actually that easy to do. Having just retired myself after 40 years of working, and also being a man, then I think I am in a pretty good place to offer some helpful advice.That's why I have put together this information and hopefully it will make your quest a great deal easier.

Well when I say retired, I would probably better describe my situation as semi-retired as it is hard to close down completely after so many years. My colleagues bought me a lovely gift of a golf trolley on my retirement which was battery operated and makes my journey around the course a great deal easier.

There are many great gifts to buy when you retire and I have put together a list of the many choices available. There are many different ideas of course and I will share with you the ones that I think make the best presents for men.

I do hope you find what you are looking for as in my opinion these are some of the best retirement gifts for men that I could think of.

I believe that you can quickly break these types of retirement gifts into two categories.

So really that is probably your first decision.

In truth either type of gift will work well, or you can be clever and match the two types without having to spend a fortune.

That would be my own preference to receive as you have something that matches the actual date, that most men look forward to, and we also end up with something practical that you can use. For me that makes the perfect balance of a retirement gift. That said let's have a look at some of what I think are the best ones available today. 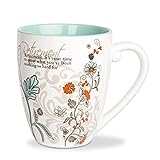 Pavilion Mark My Words Retirement Mug, 20-Ounce, 4-3/4-Inch
Retirement Inscription "Retirement...it's your time to enjoy what you've been working so hard for." There are mugs for every reason these days but I liked this one. It will also get plenty of use so marks the retirement and also useful. Ceramic 17-ounce mug Beautiful design
Buy Now

I have listed five great gifts below that will actually mark the occasion of his retirement and hanging up of his boots. These gifts will have the word retirement on them somewhere.

They are a one-off memento of the special day when he no longer has to get out of bed and go to work. It is the sort of retirement gift that he can put on display and enjoy looking at from time to time.

Just one small thing to bear in mind that not all men will want to retire for whatever reason. So if you know the person well you could buy him something practical and useful instead. If he does a lot of work around the house then ask a member of the family what he likes to do best and get something suitable for that.

Retirement Gift Idea From A Co-Worker

When someone you work with retires, it is nice to offer a small gift to recognise that. If you have known that person a long time you may want to do something special.

At other times if you work in a larger business there may be a group collection so you can contribute to that. In smaller companies it is more common for people to simply give a gift of their own choosing.

However if you simply want to recognise in your own way his retirement, then I think the gift down below makes an ideal gift for his special day, when he hangs up his boots.

Retirement Gift Idea for the Traveller

When men finally do retire, then many of them will travel a lot more than they ever had the opportunity to do before. If they are anything like me they like to take a cup of tea or coffee when out on the road.

Many of the travelling cups are useless and you end up spilling more over your clothes than you actually get into your mouth. I have however found a really good one which I have shown below for the man who is about to retire.

What Are You Going To Do When You Retire?

Book Gifts - For Retired Men Who Like To Read

If like me, he likes to read then I have provided a couple of great books that he will enjoy now that he has the time to read them. Most men like to read but usually don't take the time or simply don't have the time.

That has certainly changed on retirement. In addition to that retiring will be on his mind for sure. By getting him a book based around retirement it will be something that he wants to read. They are usually full of useful information that is suddenly very important to him.

Just avoid buying those that are just about investing his money as they are dreadfully dull.

How to Retire Happy, Wild, and Free: Retirement Wisdom That You Won't Get from Your Financial Advisor
There are hundreds of retirement books - This one is the best Most retirement books are talking about money,and selling you something, this book talks about your life. It also includes a money section of course, but trust me there is a lot more to retiring than just the money aspect. This is especially true if the person has been in a routine for many years and then that suddenly changes. Some guys deal with this no problem but many do not.
Buy Now

I don't want this to sound rude in any way but I do want to make a point. When a man retires he doesn't actually die. Have a look at these facts and hopefully you will see what I mean. I have used the USA as an example below but in most countries this is a pretty good average to use.

On average most women retire at the age of 60 and live longer than men. The average age when a woman dies is around 80 so on average they live 20 years after retirement.

Most men retire aged between 60 and 65. The average man now lives until the age of 75 so they get between 10-15 years of life after they retire.

It makes you think doesn't it? We all work the greater part of our lives and if we are lucky we get to live an extra 10-20 years in retirement.

The countries with people who live the longest are:

So as you can see from retirement to death varies from country to country but for many of us the average life after retirement is around 10-20 years. They are also years when our health is declining and the old bodies are not as active as they once where.

That does not mean they have to be spent in a state of waiting for something to happen. I would argue the opposite and I would say do as much as you can. We have a ton of wisdom and knowledge that we should share with others. Most of all we should enjoy ourselves and travel.

Any gift that helps us do that has just got to be a good thing.

Many of us men may retire from our main jobs, but that doesn't necessarily mean that we hang up our boots for good. I am in a state of what is best described as semi-retirement at the moment, and the truth is that it is a fantastic position to be in. Although I have retired and have a pension, the opportunity still exists to earn a little extra income.

If you go about that the right way, you can also pick and choose the type of work that you want to do, and more importantly the number of hours or days, that you would like to work. For someone who has always worked long and normal type of office hours, this is a novel and fun position to be in.

So as you can see when buying a gift for someone like me, it doesn't have to be directly related to complete retirement. There are still many things that I will use for going to work and indeed at work. If the man you know is in that position, it certainly opens up the range of gifts that can be bought for him.

These retirement gifts are for the lighthearted among us who want to buy someone retiring a simple fun gift. They are often called retirement gag gifts and they are just great gifts to inject a little fun into his big day.

I also find them ideal for giving as gifts to someone you may know but not want to spend a huge deal of money on. I am thinking here of the people who would be friends of a friend if that makes sense to you.

Have You Any Great Ideas For Retirement Gifts? - If so please feel free to share them here and thank you