Dreams Of Being Pregnant

Did you dream that you were pregnant? Or maybe you dreamed that a friend or family member was pregnant? Are you interested in reading true stories about other women who have dreamed of being pregnant? If so, you're in the right place!

Spiritual Pregnancy Dreams: I dreamed I was pregnant... and then found out it was true.

"I dreamed I was pregnant last night. What does that mean?"

"I woke up knowing I was pregnant today. It came to me in a dream."

"I dreamed about a positive pregnancy test last night. Could I be pregnant?"

Buy this poster at Allposters.com

Sarah had been trying to get pregnant for over a year. One night she had a dream about taking a pregnancy test. In the dream she could see that the test was positive. A bright pink plus glowed on the test! Sarah wasn't even "late" with her cycle yet, so the next morning when she woke up, she didn't know what to think. Could she really be pregnant? After all this time?

"I waited a week and then got brave enough to buy a pregnancy test from the drug store. I took the test the next morning, and to my delight, it was indeed positive. I was finally pregnant!"

Sherry's Stories: Dreams About Being Pregnant And Having Twins

Sherry Dreamed Not Only That She Was Pregnant, But Also What Her Baby Would Look Like!

The very morning after conceiving her oldest child, Sherry dreamed that she would have a baby. In the dream, she was holding an infant boy in her arms. When her baby was later born, he looked exactly the way he had in the dream!

Sherry's Dream Of Having Twins

Several years later, Sherry dreamed about multiples of baby animals and realized the dream was telling her she was pregnant with twins!

"I was walking in the woods on a dirt path and saw a boulder with a wolf lying on it. The wolf was a mother and had several cubs which were nursing. Next I walked along some more and saw some prairie dogs. There were lots of prairie dogs all around, including a mother with her many babies. I walked on a little further and noticed a doe with two fawns. Not too long after that, I found out I was pregnant with twins!"

Kristin's Dream Of Being Pregnant: I dreamed I was surrounded by pregnant women!

Kristin wasn't expecting to get pregnant. She already had two children, and was now in her early 40's. She thought her days of being pregnant were over! Yet one evening she had a dream which took her by surprise!

After eating, my husband and I went to the park. Yes, you guessed it! The park too was full of pregnant ladies!

A few days after the dream, I realized I was "late" and took a pregnancy test. The pregnancy test was positive. I now have an adorable baby girl!"

Jonelle's Spiritual Pregnancy Story: The Doctors Said She Would Never Get Pregnant.

Very early in their pregnancies or even right before becoming pregnant, many women dream about their own pregnancies. Others get a feeling within themselves. They just seem to know that they are pregnant! Jonelle, who wasn't expected to ever become pregnant, experienced both, alerting her that no matter what all her doctors had told her in the past, she too would get to experience pregnancy! Jonelle knew that the impossible had happened!

"I had a feeling very early on in my pregnancy that I was pregnant, even though my Dr's have always told me that I would never be able to conceive. I took a home pregnancy test, and it turned up negative, but I didn't give up hope. I took the same type of test a week later, and sure enough, it was positive! I had been dreaming that I had become pregnant up to a month before finding out about my pregnancy. This is absolutely a dream come true, and I am expecting a beautiful baby boy in August!"

Have A Pregnancy Dream Or Other Spiritual Pregnancy Experience to Share?

I'd love to hear about any spiritual pregnancy dreams or other spiritual experiences related to pregnancy that had meaning to you!

You may send me your story by clicking on the "Send Janiece Tobey an email" link in my profile.

Have You Ever Dreamed You Were Pregnant...And Then Found Out You Were?

Books To Help You Better Understand Your Dreams - Learn more about your dreams..why you have them and what they're trying to tell you.

Some people say they can't remember their dreams. Did you know the very act of writing a dream down, even if you only remember a tiny amount, often helps you remember more of your dreams in the future? Of course, this may not be true for everyone. But it works for me, as well as many other people with whom I've discussed the subject of dreams! Try it!

Dreams: Your Window to Heaven
Debbie Johnson's book, "Dreams: Your Window to Heaven," explores the spiritual nature of dreams. The book gives tips on remembering and interpreting your dreams, coming up with your own personal dream symbols (including learning how they can change over time), solving daily problems via your dreams, and even how to have prophetic dreams on purpose.
Buy Now 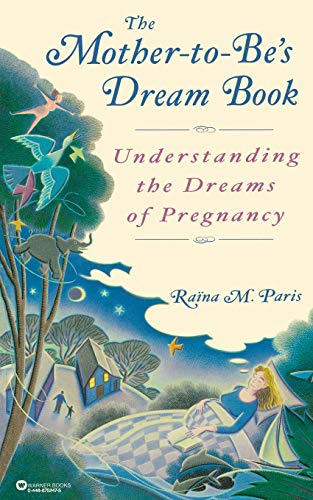 The Mother-to-Be's Dream Book: Understanding the Dreams of Pregnancy
Learn about the different types of dreams that are common for each trimester! What can you learn about your baby from your dreams?
Buy Now

What to Expect When You're Expecting
Buy Now

A pregnancy manual can help guide you through this new experience in your life! It can help you understand what's going on in your body, and explain what you can expect in later months, as well as during labor and delivery. Most pregnancy manuals provide many tips on things such as reducing morning sickness, making a birthing plan, preparing the nursery, etc. I owed several pregnancy manuals with my pregnancies. My favorites were the "What To Expect When You're Expecting" series.