Dystonia, Living in the Eye of the Tiger

Dystonia is a rare neurological disorder which causes involuntary muscle movements throughout parts of the body.

It is often misdiagnosed and misunderstood. No one knows precise causes, only effects.

Finally, the National Institute of Health is doing some research on behalf of those tortured by the condition.

Two major classifications of dystonia are aptly named primary and secondary. The former is suspected to be genetic, the latter somehow acquired. Heavy metals are suspected as one way it is acquired.

Dystonia can occur in local areas only, or more widely. A patient's dystonia may be classified as focal, multi-focal, or general.

Patients are being sought for study as you read this.

Folks who suffer from dystonia start having motions that are unusual, often facially. They may experience distortion in the cervical area, curling of limbs, or more subtle, but annoying, movement.

Not having the vaguest idea that dystonia may be the reason, people often misinterpret the sufferer's movements and facial expressions.

Thyroid disorders seem to be very common in dystonia patients, but neurology sees this relationship as the proverbial chicken and egg. They don't know if it is just a big coincidence, or something more.

Trauma and genetics are now considered part of the puzzle.

There is one well publicized case of a man who has taken to carrying a letter from his doctor in his pocket as police mistook his condition, repeatedly arresting him for DUI.

Most people know dystonia as well as they know this white tiger. Dystonia is as rare as this white darling, and nearly as mean.

Connection in the dystonia community is growing. The American Dystonia Society Community Center Ning has just reached 166 members. Hopefully it is growing. Yes, folks with this disorder now meet online for interaction. Fantastic!

When a doctor describes the rarity of one's disorder as 1 in 3 million, you feel fairly alone. I thought i was alone for over 20 years. Now I even have in-person friends with dystonia from internet contact.

MY FRIEND KYM - DBS On, then DBS off

DBS, or deep brain stimulation, like placing a pacemaker in the brain, has had some mixed results. As you can see, Kym's DBS is result is astonishing. Kym is having the pacemaker adjusted at the doctors office. Observing as it then operates Kym does remarkably well compared to when the DBS is turned off for the adjustment.

Are Movement Disorders on the Rise?

The treatment of choice has been botulism toxin injections. Yes, botox. Botox may be covered by insurance, as medically necessary. New cautions have been released on botox injections involving allergy and intolerance causing involuntary sleeping.

Try Web M.D., you name the site and you won't find much on the subject of dystonia, albeit now in the hopper at NIH.

If you are dystonic, or know any one who is, you should contact NIH right away.

Many of the studies now being done take very little time or effort from you. Answer questions. Submit a DNA sample with a simple cheek swab.

This is the first time there has been any serious research effort spent on dystonia. Now is the time.

You may have guessed that I am dystonic myself. So are some famous, artistic people.

I once asked my neurologist if I could choose a special discipline were I to donate my body to a medical school. The answer was no.

Now it is yes, and they only need your brain. I thought that was neat because it wouldn't be missed at the wake. Not that it would be missed all that much now.

As we explore this disorder, I hope you will learn a lot about your neighbor. Perhaps you will consider supporting some charitable works.

YOU MAY WANT TO GO HERE FIRST - learn about dystonia

The biggest and best, if not only, places to get some good web information about dystonia can be found in this link list.

Support for Sub-groups of Dystonia

This offering on support is even broken down in to types of dystonia, primary, secondary, focal, multi-focal, cervical, and general.

VIDEOS OF DYSTONIA PATIENTS - Dystonia comes out of the closet.

ANOTHER CASE - A Facial Dystonia

So many theories, so little knowledge. I am glad to report that these folks are out there working on it. Please, if you are dystonic, volunteer to be studied.

CHILDREN - No Ages are Immune

ANOTHER CASE - treatment for extreme cases

DYSTONIA IS NOT PARKINSON'S - They are considered related

The tiger can be treated with botox but, it is never permanent. You have to go through cycles of getting and needing a shot.

Some people with dystonia can not tolerate botox at all. For them, hopefully, the drug Xeomin will receive FDA approval.

I am lucky that it works pretty well on me, although sometimes I feel like I have electric worms crawling under my face. I get weird noises and sensations in my ears and throat.

These books are good guides. 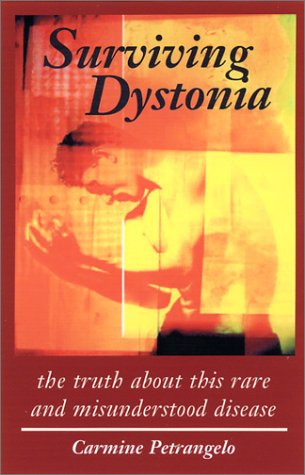 This is a Ning for pros, patients and others. Real people, real support, really great information.

Dystonia: Etiology, Clinical Features, and Treatment
Not too technical, but a valuable resource
Buy Now

We Have Dystonia. It Doesn't Have Us.

The heroic struggles of those afflicted with dystonia are most inspiring. The renowned finger method guitarist, Billy McLaughlin, taught himself to use his non-dominant hand to continue his astonishing musical career. Dystonia seems to disproportionally affect artists, musicians and folks who regularly perform repetitive unusual movements.

You Can Help Research

You may not have been aware before, but you are now. If you liked this article, please let me know. Please consider a donation to a dystonia organization.

PLEASE LEAVE YOUR THOUGHTS - These folks need our support.