A FRESH APPROACH TOWARDS HOUSEWORK FATIGUE

Housewives of the world rejoice! The hearth goddess has arrived to the world to help us carry the cross, sorry, the sink I mean that we are born with in this life, and to give us a fresh and different approach towards the drudgery of housework. The magic amulet that she has left us is an inspired book written by a clever and educated woman who seems to have been very affected by what she calls "The Household Blues".

As we all have experienced, the emotional charge and frustration that can be caused by the routine tasks of keeping a home can vary from simple boredom to serious depression if it adds on a series of other factors The author touches in a detailed way every aspect of what bothers and tires women all over the world, who have to do the same things over and over again, without seeing a finished product of their labour.

The book is not a mere compilation of advice on how to keep a home well organized, or on the best products to use for thorough cleaning or on some simple, healthy and tasty recipes. There is not even a single piece of such kind of advice in it. It is rather a psychological and philosophical analysis of the reasons that underlie what bothers and makes us feel low spirited while we are executing the tasks of managing a household.

The author is a very well-read person, and it seems that she has done a thorough research not only on her subject but on different religious and philosophical schools of thought, and used the essence of all it to write this beautiful book.

IT IS NOT THINGS THAT BOTHER US, BUT THE WAY WE THINK ABOUT THEM (EPICTETUS).

The saying of the Greek philosopher corresponds very well to the main idea of the book. According to the author, the key to have a more positive attitude to the boring tasks of keeping your house clean and tidy, well organized and pleasant is to understand that the gist of it all is that it's not cleaning and dusting we do, but the approach we have towards it and the way we relate to others, and of course, to life itself.

This is a very important point, something we have to keep in mind and soul every day so as not to let life and its joys escape through our fingers.

The more I think about it, the more I see how right she is and how we sometimes use work as a pretext to cover up our shortcomings in the emotional field, thus losing the opportunity to have a meaningful and fullfilling life.

THE LANGUAGE OF THE BOOK

It is worth mentioning the way the book is written. A beautiful, refined English that surprises as it is supposed to contrast the subject that it treats. Even if I am a foreigner I appreciate very much the language in which Dickens, Shakepseare, Keats and so many other authors have written and I find a remote resonance of their language in the book.

As I was reading the book in the calm and fresh night of a Greek mountainous village, I was feeling like drinking a sweet beverage, and sparkling ideas were being born in my mind. The beautiful fairy of the language was touching .reality and transforming it in something more profound, almost spiritual.

Wise sayings of famous people are used throughout the book in a relevant way to emphasize and enhance the author's thoughts. It is surprising to see how these sayings can adjust to the triviality of every day life and routine of keeping a home.

WHO IS DANIELLE RAINE

Danielle Raine was born and raised in Yorkshire, England. After working as home-based graphic designer and copywriter for 11 years, she developed a severe case of the Housework Blues. This prompted her to embark on a mission, to help women everywhere cope with the mental and emotional challenge of keeping a home. Housework Blues - A Survival guide is her first book. She currently lives in North Yorkshire, with her wonderful (but messy) husband and two sons. 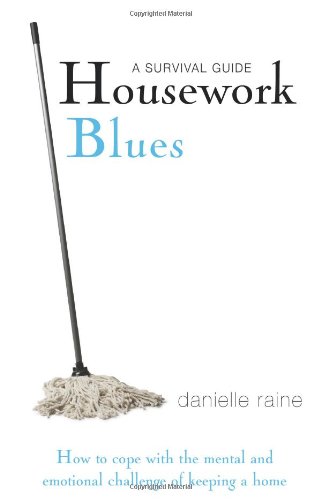 Housework Blues: A Survival Guide- How to Cope with the Mental and Emotional Challenge of Keeping a Home
Buy Now

MY PERSONAL EXPERIENCE OF THE HOUSWORK BLUES

After working for several years in an international organization abroad, where I had a very well paid position but where I worked very hard and spent most of my time outside my home, a moment came that I felt really tired and fed up. Memories of a happy childhood and of a traditional way of life were awaken and I saw no meaning in the way I was living, so I decided to come back to my country, to stay at home and dedicate myself in creating a cosy and beautiful home, to prepare warm food for my husband and have time to be with my two children.

However, reality is usually very different from how we imagine it. As I was inexperienced in keeping a household, and devoid of external interests, with almost no friends at all (I was starting a new life in my country) I did not know where to start and where to end. A series of housewives of my past and my present were parading in my imagination presenting me a high ideal of how things should be done in my home.

I spent most of my time exhausting myself by cleaning and re-cleaning, tidying and retidying up, cooking complicated recipes and, of course, looking after my two children. A teenager and a newborn baby. The result was that I collapsed. Once I heard on TV the general secretary of the Equality bureau of the Ministry to talk about the Depression of the housewives.At the time I did not want to admit it to myself, but years later I realized how true she was.

I have not regretted of being a housewife. Having the ability to organize my time as I want, I have been able to do many other things that helped enormously my family and I also pursued some of my inclinations, not to mention the fact that I was near my children, was able to nurse them when they were sick and help them with their studies. And finally what I thought that it was a choice proved to be a necessity, since my husband's professional obligations sometimes kept him away from home.

The fact is that I did not avoid the experience of the "Housework blues" a not so pleasant one. Being a strong person I managed to be "functional" and keep everyday life as normal as possible. As years went by I realized that the reason of the dissatisfaction I was feeling was the way I carried out my duty of being a housewife.

After so many years, I think that I have changed a little bit my attitude, so the book HOUSEWORK BLUES found a fertile ground. What is written in it helped me a lot clear out my blurred ideas and stabilize a more positive attitude that had already been vaguely born in me.

What I find fascinating and revelating in the content of this book, I repeat, is that housework, as everything that we do as a job, is not merely an interesting or uninteresting work but a way to relate, create and be useful to ourselves and to others and this is the idea that Danielle Raine is trying to inculcate with her writing. This is a profound thinking, not easy to assimilate, but very fulfilling and meaningful in the end.

Have you ever experienced the housework blues? How did you overcome it?